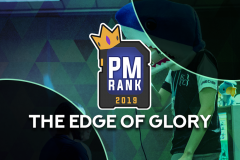 Photo Credit: Delta (Jeff Mahieu)​
Greetings one and all to the opening of the fourth annual ranking of Project M's top 50 players, PMRank 2019! We are very excited to begin unveiling this year's rankings, but first we want to acknowledge a couple players who very nearly missed out on a top 50 spot. These two players feature uncommon characters along with their uncommon skill, and we hope this taste of what's to come will only build greater expectations of the competitors on the horizon.

​
Christopher “~CP9~” Williams grabbed national attention this year piloting the scarcely used and seldom understood Olimar to new heights. Currently residing in the MD/VA region, ~CP9~ has travelled to several marquee East Coast events such as Blacklisted 5, where he netted a win against Aidan of PMRank 2018 fame. Much of the rest of...
Article Project M
Continue…
Top Bottom