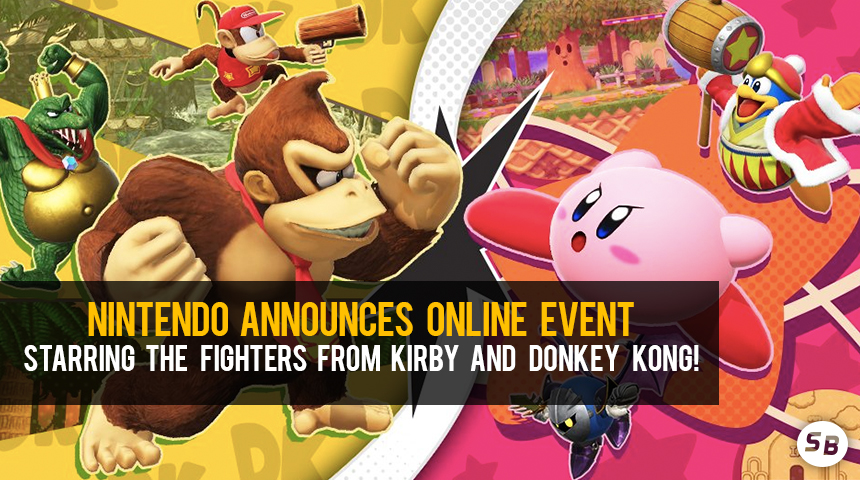 The event will start on May 1st, run till May 4th, and has the following ruleset:
Players can expect to earn a spirit as a prize for playing, and the strength of that spirit will depend on how many battles they’re able to win!

Author’s Note: Personally, I won’t be participating because I hate playing online (and even if I wanted to I can’t due to my current housing situation) but I think it’s pretty darn cool that they’re doing this. I also absolutely adore the art Nintendo made for this event, it really pops! But what do you think of this? Please let us know in the comments below!

I'm more of a DK crew guy myself. Love hard games, not a fan of the obnoxiously easy Kirby stuff.
I do find the choice kind of strange but i really like the picture used to promote the event, really stylish.
Something on that pic feels wrong. 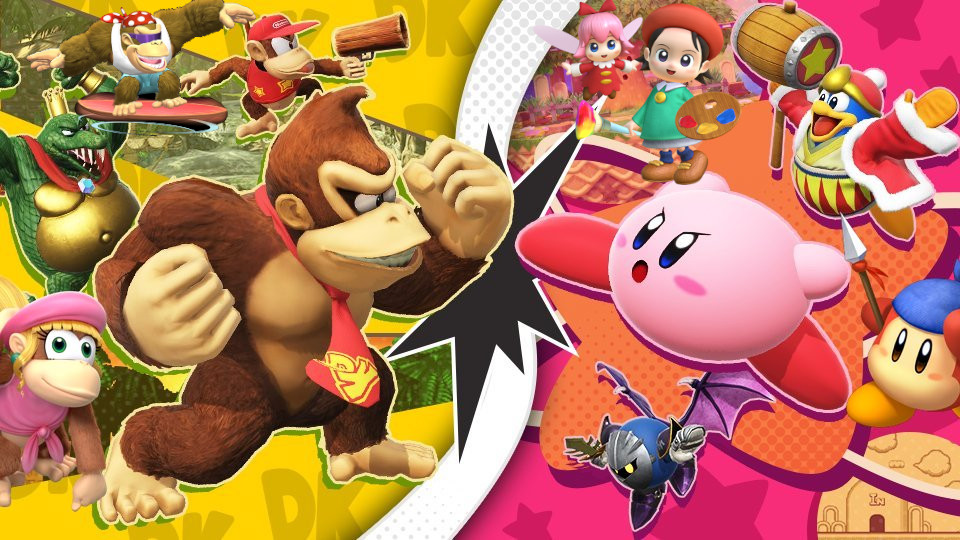 Time to kick some ass with my main King K. Rool!
obviously this means Dixie Kong and Bandana Dee for the second fighter’s past.
GamerZardEX said:
People who play these two baffle me to Hades and back. though you’ll have to be more specific about which king you’re talking about.
Click to expand...
Oh yeah, I guess K Rool is a king huh...

The reason people play bad characters is because they're character loyalists. I love the Kirby franchise so I'm always gonna play Kirby characters. I'll play Kirby casually, and MK when I want to actually try taking a stock or two off my opponent lol
Whoever wins gets a newcomer.

Nah, but it's interesting that they chose these two. They often get compared, are roughly the same popularity wise with DK being bigger in the west and Kirby bigger in the east.
One is considered the hardest platformer series Nintendo has and the other the easiest platformer series they own.
Also both have their main character, their antagonist and their ally as playables too

Thematically I really like this.
YoshiandToad said:
Whoever wins gets a newcomer.

Nah, but it's interesting that they chose these two. They often get compared, are roughly the same popularity wise with DK being bigger in the west and Kirby bigger in the east.
One is considered the hardest platformer series Nintendo has and the other the easiest platformer series they own.
Also both have their main character, their antagonist and their ally as playables too

Adding one character is not enough, they added K Rool and DK is still missing Dixie, if they added Dixie people would have complained of no K Rool.
They should add enough characters to each series to make them feel complete... and don't let me start on the Bandana Dee debate.

There are many Kirby characters who would be very fun to play as, and people are still obsessed with the one who weilds a traditional weapon. The Dark Matter trilogy is still not represented aside of a few spirits and a couple of songs (2 low effort ports, one is a remix but it was made more than a decade ago, the other is an N64 midi port). Modern Kirby has much more to offer than just Bandana Waddle Dee, too.

In my opinion Kirby would be perfect with 6 characters, 5 originals and 1 echo (obviously Galacta Knight); for the 5 originals, I would personally add Magolor and Adeleine, one to represent modern kirby (and final bosses), and one to represent the Dark Matter trilogy (and several classic enemies including Kracko). People want Bandana Dee, so Bandana Dee and Adeleine would be a nice compromise to make everyone happy, but I really think that Magolor would be a much better modern rep than Bandana Dee (I think Dee would work better as one of those advanced assist trophies than as an actual character, and Rick, Kine and Coo have been important enough in the history of the franchise to at least deserve an assist trophy too, they even got a spinoff series in Kirby Star Stacker).
Technically, the Kirby series is one of those where you have lots of options, heck even freaking Chef Kawasaki would be an interesting fighter if tweaked in the right way; too bad it only has 3 characters.

For DK, it's a lot easier. Just add Dixie, Cranky (yes) and echo Funky, and that's all the series needs characters-wise. 6 (5+1) characters one, 6 (5+1) characters the other... it will probably never happen because it's more likely that a reboot comes first and we'll get less characters instead of more. (I would also take a reboot as long as it actually improves the game and brings innovation; I'm all for quality over quantity).
Last edited: Apr 30, 2020
Imma justs spam kirby up B on dong, king k and dedede
GamerZardEX said:
Cool, a tourney with no good characters.
Click to expand...
I'm sure if this was a Fire Emblem event you would say the opposite.
You must log in or register to reply here.
Share: Facebook Twitter Reddit WhatsApp Email Link
Top Bottom