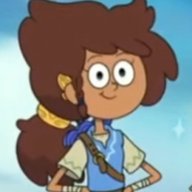 Last seen
Today at 3:35 AM · Viewing thread THE Social Thread on Vacation in Paldea