ARMS Music We Could See In Smash 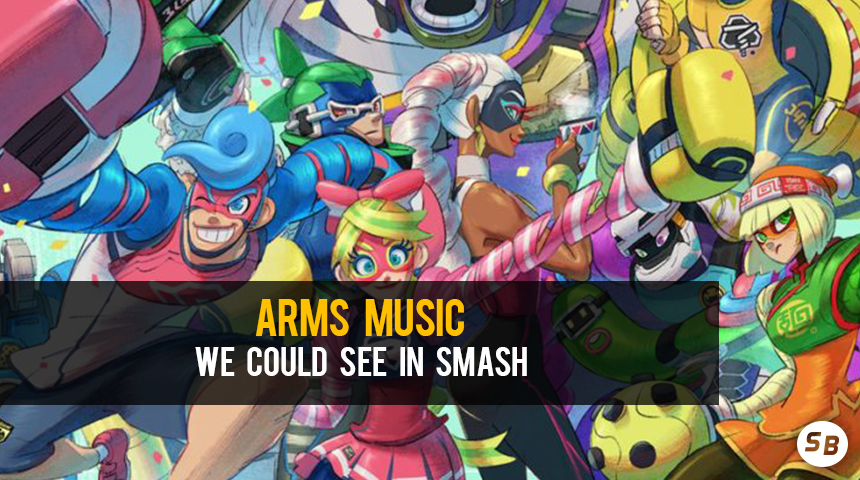 With ARMS content due next month, let’s dive in and see what kind of music could come from this series. It has tons of great music that really show the variety of characters and locations in this new franchise. ARMS music is known for its upbeat and catchy style which jives well with the series as a whole. It’s currently unknown which stage will be selected to represent the series but here is a list of music that would go well with just about any stage. So let’s take a look!


This is the main theme of ARMS and is what we heard when the announcement was made that the next fighter will be from this series. It goes without saying that this song will make an appearance; either in its original form or in a remix. Regardless of which kind it will be, it will be great to hear those audience-like chants found in the song while smashing other characters around the stage.


This version is similar to the original but features the vocals of our favorite ribbon-y fighter, Ribbon Girl. She’s a pop star, you know? Adding this version into the game would be nice due to Ribbon Girl’s role in it and how several songs have different versions of them. More often than not, it’s the English version and then the Japanese version but, in this case, it’s a song sung by another character.


This springy tune bears some similarity to the Grand Prix Theme due to those audience chants. However, it has its own unique sound thanks to the horns that initially play in the beginning. Even if we don’t get Spring Man as a character or Spring Stadium as a stage; this song is a must! Not having this song would be like not having Ryu’s or Terry’s theme. If the audience chants are an issue, perhaps a remix removing them could help differentiate this song from the Grand Prix Theme.


While this once again features Ribbon Girl’s vocals, this one appeared on the Ribbon Ring stage. In terms of character themes, this has lots of sass and attitude to it. The upbeat tempo and poppiness of the song is a true testament to Ribbon Girl’s pop singer career. This song would go quite well to the action in Smash because of its poppy vocals and energetic sound. Much like the above-mentioned songs, it would be strange not to get this song or a remix featured in the Challenger Pack.

Compared to the previous songs, this one is a bit more unique with a serious Japanese vibe while still mixing in that blood pumping energy. However, unlike the first two themes, this song is a bit more down-tempo and subdued. This would be a nice contrast to what we have seen (and will see later) in terms of music. Ninjara isn’t exactly the most popular ARMS character but having this song would be quite refreshing from the pop-rock/brass band-type songs usually found in the series.


If Ninja College had a Japanese vibe to it, then Ramen Bowl certainly has a Chinese vibe to it. This song is quite energetic and has a nice fusion of pop, rock, and the traditional Chinese sound that has become a staple in music. This kind of music is often featured in traditional fighting games like Street Fighter and [/i]Fatal Fury/King of Fighters[/i] that have a fighter of Chinese descent. This would also be a great way to represent that trend by including a Chinese-influenced song from a newer fighting game. Min-Min is also quite a popular character as well so, even if she isn’t playable, it would be a good way to include something related to her.


One of the most defining aspects of this theme are the trombones that are featured throughout the song. It truly represents Twintelle quite well given she is an actress and a star who deserves only the biggest screen to showcase her skills on. We already have a good amount of songs using brass instruments on it but this one is a great fit for the game. Like Min Min, Twintelle is another fan favorite and including this song would be a great way to represent this character if she isn’t playable.


This quirky techno-pop song is the theme of Helix, a strange fighter born in a laboratory who has an odd physical structure. While Helix isn’t a likely candidate for Fighter Pack #7, his song sure has lots of uniqueness to it compared to the rest of the soundtrack. It’s important to not only cover the content that’s popular or present in the game but also include content that’s largely absent.


Much like DNA Lab, Via Dolce is a great departure from the typical style of music from this series. This one is a more whimsical, child-like tune, and, to date, there really isn’t any other song like it. It really gives the battle a different feeling when smashing along to this. Like Helix, Lola Pop doesn’t often come up as a likely candidate but this song simply can’t be ignored. It adds much needed musical diversity in a soundtrack that typically offers blood-pumping high-amped music.


While Max Brass might not be in the game, it would be a shame not to include this song. There really aren't any sort of heavy rock songs above and this is seriously one of the best rock songs in ARMS. Including this song is also a great way to acknowledge the champion of the ARMS Tournament and organizer of the event. We have many examples including Street Fighter. This song is a stark contrast to songs like Ribbon Ring and Spring Stadium due to its darker atmosphere and harsher song. It would be perfect for a final battle on the ARMS stage.


This one is a personal favorite of mine and I had to include it. This song was featured in the final battle against the nefarious Dr. Coyle after she donned the ARMS weapon, Hedlok. Like Sky Arena, this is a perfect rock song with a unique fusion of distorted vocals that truly makes it an amazing “final boss” song. While Dr. Coyle is low on the totem pole of potential ARMS characters, this theme should definitely be included, both to acknowledge the character and to add a variety of musical themes in the ARMS song list.


Many of the songs in ARMS have a certain kind of energy to them which really fits with the action but, when you compare them, the energy can sort of sound the same. You can throw in a few different instruments here or there or combine different musical styles but they all have that same kind of energy with them. This one is one of those cases where it’s yet another energetic song. However, what sets it apart from the rest is the tropical/beach vibe it gives off. V-Ball is an in-game sport based on beach volleyball so having it have a tropical musical theme works hand in hand.

With ARMS on the way in a month, it’s fun to speculate who could be Fighter Six but this inclusion also means there’s a stage, Spirits, and music. This is but a small list of music that I feel we could be getting. Some of the tracks are obvious pucks while others are maybe a bit of a stretch. What do you think? What music do you want to see be included? Let us know below!

i wonder how many we'll get, its been one extreme to the other with dlc music
ARMS music
see
You could pretty much put the entire OST there honestly.
'Replay' is underrated.
Still shocked that base game Ultimate didn't even have a single ARMS track.

Super glad DLC is coming along to fix that offense
Last edited: Jun 5, 2020
Dr Coyle's theme and Ribbon Ring NEED to be in!
Here's my music wishlist:

Last edited: Jun 5, 2020
[NAME REDACTED] is the one I want to see the most.
just put all of them in there lmao
Have the main 15 character themes, replay theme, and Hedlok theme and I'll be set (every single song is also an acceptable option).

Look forward to see what remixes we'll get too.
Grand Prix
Spring Stadium
Ribbon Ring
Ramen Bowl
Cinema Deux
vs. Dr. Coyole among others would be grand.
I never heard any arms music until now. Honestly they didn't sound to great imo.


Part of it is cuz every single one seems to sound like they are using the same core melody, which sounds a little to repetitive and dull to me.

Yeah I know other Nintendo games have done this in the past(super Mario world waaaay back in the day is probably the first) but the changed up enough in those games that it didn't feel AS obvious.

Except the nsmb series, that's by far the worst culprit.