The Smash Roster “God of War”-ified 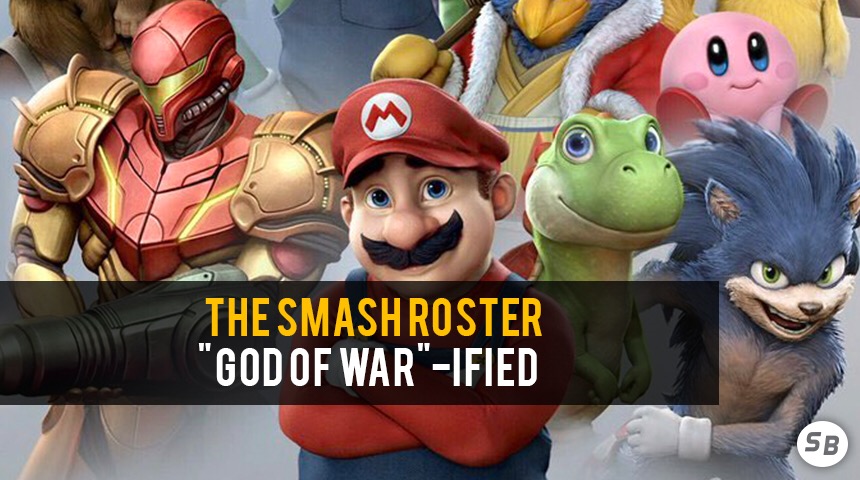 If you keep tabs on PlayStation games, you might be familiar with the critically-acclaimed series God of War. Yeah, it’s that brutally brutal series about Kratos, a Spartan-warrior-turned-demigod who rages against the Greek gods in response to his misfortunes. The newest addition to the series sees a now-aged warrior and his young son fighting against the deities and creatures of the Norwegian pantheon and mythology. So, what does this have to do with Smash Bros.? Is Kratos coming to Smash?! (Now that would be the day!)

At the risk of getting “you’re too slow” memes, the news section wants to highlight one incredibly talented artist who worked as the art director for the latest God of War game, Raf Grassetti. It just so happens he is a fan of the Smash Bros. series and used his god-like talent to take his own spin on our loveable smashing cast!

To date, he has made art for the following characters:

And Waluigi but technically he’s not apart of the Smash cast. Yet...

Here is a small snippet of his work. The detail and love Mr. Grassetti has put into these creations is quite astounding!

http://instagr.am/p/BsN6rv0AfPn/ Link looks like could square off against Kratos himself!

http://instagr.am/p/BsVowSMgW0W/ I prefer this Sonic to a certain movie version that has since been scrapped...

http://instagr.am/p/BsYO9-pA8nl/ Mewtwo looks certainly frightening. As it should be.

Mr. Grassetti is also known for doing other artwork including Marvel, Battletoads, fantasy, and of course, God of War. Make sure you check it out! Make sure to follow him on instagram and on twitter. Who would you like to see Mr. Grassetti create next? Make sure you let Mr. Grassetti know on either social media account! Feel free to let us know by commenting below!
Last edited by a moderator: Jun 26, 2019

Hoping that he makes art of the Hero, Banjo and Lucario in the future.
Thanks, i... Like it ?

The Mario cast looks so good in this style, holy crud.

Paramount, take notes
Last edited: Jun 24, 2019
I like it! (for the most part. Sonic, Kirby, Yoshi and a few others don't look that good) reminds me of Jim Henson Creature Shop stuff - exaggerated but realistic.
Sonic looks good to me honestly.

But I can see why some people would dislike his design after what happened with the Sonic movie.
Waluigi is part of the cast as an assist trophy.
Waiting for Meta Knight, hope it looks cool as Mewtwo.
Sonic just looks like the movie one but with way better proportions and I like it actually
Mewtwo also looks like the movie version
Captain Falcon should be the same
OK, thnx, now do the muscular Little Mac, Ganondorf, and the Belmonts. :^)
I think Samus is the best looking one so far, but you just gotta love that smug Peach
My boi would be that thicc in a realistic setting

It feels like what megaman should look like if he was ever portrayed realistically. You can tell he’s not a person in a suit, nor a cyborg, but a highly advanced machine, and he also looks actually threatening.
it's an interesting different take to look at, but I'm personally glad the characters mostly don't look anything like this. Especially the cartoonish ones. Donkey Kong characters have a very distinct look to them, but in that picture I just see crusty realistic animals. It's the exact problem I've got with the Lion King remake.
I find his work on King Dedede (Or really, any of the Kirby characters) and K. Rool in particular the best. Really like what he's done with a lot of them.
would be cool to see him do the entire roster eventually
Kirby looks freaking adorable makes me want to bear hug him so much or squish his little rosy cheeks on his face!
Last edited: Jun 26, 2019
I love this style of Kirby because it's so cute!!!

And, what do Mii Fighters look like in Raf Grassetti's cool art style, I wonder?
THIS IS WHAT GRAPHICS WILL LOOK LIKE

Cyborg Sun said:
THIS IS WHAT GRAPHICS WILL LOOK LIKE