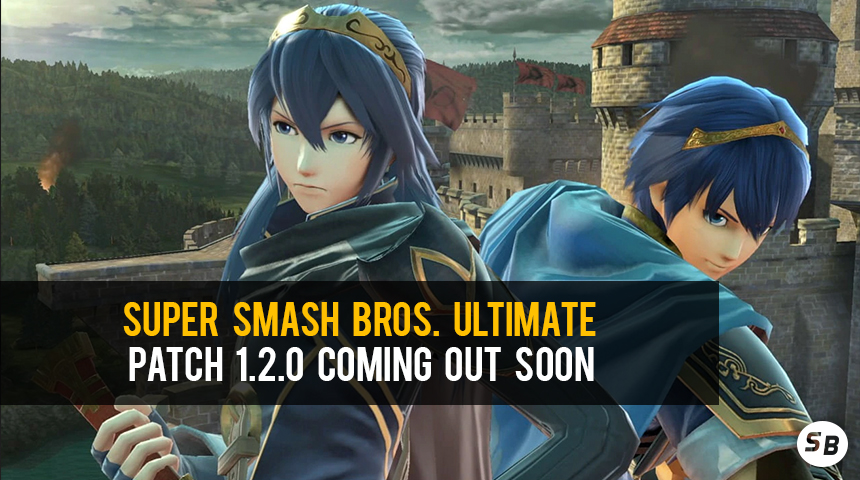 On December 11th, 2018, it was confirmed that Super Smash Bros. Ultimate will be receiving a patch update sometime within the following week.

Very little is known about what patch 1.2.0 will be like. It’s known however that replays made in version 1.1.0 will not be compatible with 1.2.0, and players are urged to convert their replays to videos if they want to keep them. Since the replays won’t be compatible it’s reasonable to expect gameplay alterations in some form, however we don’t know if these alterations would be bug-fixes or balance changes, and gameplay alterations aren’t even 100% confirmed.

Super Smash Bros. Ultimate Version 1.2.0 will be distributed by next week. Once you update, you will not be able to watch replays. To save them, please convert them to video. Patch notes will be released when the update goes live. pic.twitter.com/YhWuFKvJbM

Author’s Note: So, what do you expect to happen in 1.2.0? Balance changes, bug-fixes, something else? Please let us know in the comments below!

DeltaSceptile said:
I said no bull..
Click to expand...
How are they "bull"?
This will likely never happened, but I want a patch that improves on matchmaking services and allows people to message friends and let them know they are playing Smash online. It STILL annoys me to see my friends all playing Smash with no way to communicate within the game to send invites. Like not even creating an arena helps in that regard. It's technically a small thing, but countless of online games give you the ability to just send out an invite, create a lobby, add friends and play a game. I wish Ultimate had that.
BigMac1304 said:
How are they "bull"?
Click to expand...
Roy and Cloud are not as good as Bayo, not even close. And not even including Diddy Kong is shocking, considering how well he handles right now and hasn’t received really any notable nerfs, which means he’s still as good as he was. Heck, the nerfs he got were actually beneficial to my playstyle, no more suicidal monkey flips here. If anything, just swap them with Shulk and Diddy, then it will be an accurate statement.
Last edited: Dec 12, 2018
DeltaSceptile said:
What rock have you been living under this whole time?
Click to expand...
you're either trolling or still playing smash 4.
Fortunately none of the patches involve fixing the "change language in main Smash mode to unlock characters faster" trick that allows you to have everyone without needing to play any of the Single Player modes (provided you win every match). Let's keep it that way.
Honestly I think the character balance seems fine as is for now. Too many people claim to think some characters are broken, but in reality the people complaining just have main(s) who are a bad matchup, and they need to understand the matchup better. What the developers really need to do is fix the Fountain of Dreams framerate drop, but much more importantly: they need to add more features that would help the competitive scene, since Nintendo claims to care about that now. Sakurai has on record said many times he pretty much actively dislikes the competitive scene, and he sees it as a perversion of his fun party game for kids.

The one thing everyone here can agree on is that they need to come up with a better way of toggling stage hazards in lobbies or in game settings. Making it an option for each switch system (or better yet, for each username on a switch system) to be able to toggle stage hazards on specific stages in the game would be better. This would be a vast improvement on the competitive viability of the game. Some stages are only playable in a competitive setting without hazards, but others are good WITH hazards. This creates a situation where tournament organizers are encouraged to ban all stage hazards or play with only the 'good' hazard stages. Smashville is a great stage, so is Yosh's Island. But Frigate Orpheon is just stupid, making what was a great stage terrible and unplayable (and there are many others that have this problem). Creating a toggle for each individual stage having hazards on or off would be a good one update, imo better than any character rebalancing, which its way too soon to tell what really needs to happen.
Also, I know this is a pie in the sky dream, not because it would be hard to do, but because it would be actually smart, and nintendo doesn't seem to be 'smart', is that they should make a toggle where you can easily ban stages from one screen, or hell, allow each switch user to set up a preselected list of stages: neutral stages and counterpicks, the way 20xx and PM do. Again, I know this will never ever happen, but if we're going to sit here and arm-chair theorize about ways to improve the game, this is a dramatic improvement that basically nobody in their right mind can possibly disagree with.
I can't imagine what balance patches could possibly be needed.

I would suggest an option to turn off the zoom in and slow down on a winning move. Or the ability to have all eight boxes in Smash mode at once. Or the ability to remember which characters and skins we chose. Or all the skins from all the previous games.

Or all the characters unlocked from the beginning in Smash mode and you still have to earn and defeat them in all other modes.
The game hasn't even been out for a week, it is way too early to be calling for nerfs to characters.

Wait until most of us have actually learned the game first.
Last edited: Dec 13, 2018
Smashing Ramen said:
A new update?
Better nerf Greninja
Click to expand...
... but someone i talk to said that Bowser Jr was nerfed HARD
Last edited: Dec 13, 2018
Yo, can someone help me get this to Daddy Sakurai?
OLIMAR needs to be nerfed. It's not even fun to play against him, competitively, or non-competitively. UP AIR, UP AIR, UP AIR, DOWN AIR, BAIR, EXTREMELY LONG REACHING GRAB, ThrOw a cOuPLE PIKMEEENNNN OOOHHHH

I guess I was just trying to make a point.
Umm...

I've been playing competitively since smash 4.

Playing on the *COUGH*Bridgeofeldin*COUGH-
COUGH*
Definitely a legal stage.
On accident (I forgot to change the random stage selection).

But yeah, I was playing against someone who thinks they are decent. He is somewhat frustrating sometimes because I can never actually try my hardest with him. Every now and then, I decide to screw with him and play well for a while, but then I go back to playing somewhat casually. But still, when I play with Ridley and Olimar, I don't enjoy it as much, because they are just too good. When I play against him, I nearly always try to give him a one stock advantage, but if I'm playing Olimar or Ridley, I give him like a 50% advantage (along with one stock) and I still beat him. When I'm alone, I only have lv 9 CPUs to play with, but Olimar and Ridley are too strong. I'm trying to look at this from the view of casual players as well, and be a bit empathetic. I mean, Ridley does not take any skill to use in a casual scene. SIDE SPECIAL. DOWN SPECIAL. SMASH ATTACK. MAYBE SOME NEUTRAL SPECIALS.
Olimar just abuses his opponents (along with his Pikmin), by constantly throwing them.
What I'm trying to say is that I feel like playing competitively should take a decent amount of skill and effort. You should have to put some effort into the game if you play competitively. Do you remember the 4 player For Glory matches? I tried a few of them out back then, and ALL YOU COULD FIND WAS BOWSERS SPAMMING SIDE B AND DOWN B (occasionally a side smash or up smash). If you were lucky, you'd find a Ganondorf or Captain Falcon that spams neutral b, down b, or side b.
I don't want this to happen again, but with the current Ridley, it might happen. I want to make sure that both casual and competitive players can enjoy the game equally. Competitive players often come from people who picked up the game casually and thought that it was really NEAT.

I eventually start spouting nonsense when I type for a long time.


hahahahahahahahahahahahahahahahahahahahaha
I hope they will address the input delay.
JoltSmash13 said:
Olimar just abuses his opponents (along with his Pikmin), by constantly throwing them.
What I'm trying to say is that I feel like playing competitively should take a decent amount of skill and effort.
Click to expand...
I agree that Olimar is definitely better then last game but it doesn’t make him top tier. I played as him once, and sure he can do some damage by throwing pikmin, but honestly I’d still say the title of op belongs to Diddy Kong.
Probably just a bug fix. I'd be shocked if there are any balance changes.
My hopes are online and input delay updates.

That's about it though, and I don't really expect either yet.

If Nintendo hasn't made their NSO service good yet, there's no way they'll fix Smash's online mode anytime soon.
DeltaSceptile said:
And yet she plays more or less the same as 4. Do you main Bayo, or do you just never see her in action? (the reasons someone would defend how ‘balanced’ she is compared to others)
Click to expand...
Her witch time lasts way to long, thats the only think that I see wrong with her, but I haven't been playing a lot of Bayo and I haven't been playing much against her so I'm not too informed.
You must log in or register to reply here.
Share: Facebook Twitter Reddit WhatsApp Email Link
Top