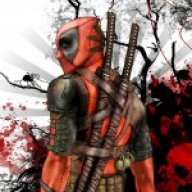 The Original Deadpool Fan · 28 · From Pennsylvania