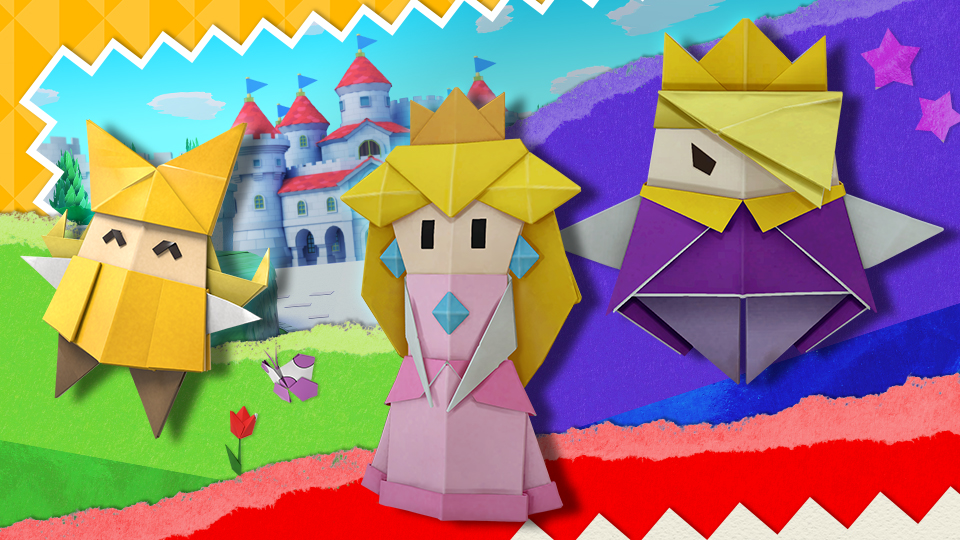 The event is aptly named, in Japanese, “Paper Mario: The Origami King”. It’s unknown what title the event will have in English. The event will feature a total of three spirits and is set to run for five days starting from August 28th (Friday), 2020.

The other two Spirits are Olivia (left) and King Olly (right). Olivia is the trusted guide and companion for Mario and King Olly is the dastardly brother of Olivia who transformed Peach, Bowser and company into origami.

It’s currently unknown if this will impact Paper Mario’s chances of appearing as DLC in Fighter Pass Vol. 2 which would be a similar situation as Min-Min. Alternatively, the character could be an Origami King-themed Paper Mario. It’s also unknown how this Spirit Event may impact a long-rumored 8/28 Nintendo Presents or Nintendo Direct. I guess time will tell. Make sure you grab these three Spirits when the event launches cause, like paper, they will “blow away with the wind” after five days.

Author’s Note: Getting the event didn’t surprise me but what did is that 1) Spirit Events like this has been slower than usual and 2) we still don’t have a Luigi’s Mansion 3 Spirit Event.

i was hoping for one of these
The official twitter didn’t upload the spirit info all at once. I edited the main article with translations from the newer additions.
This probably doesn't mean anything in regards to making any Paper Mario characters playable, but at least the series itself is continuing to be represented in some way.

Mario & Sonic Guy said:
This probably doesn't mean anything in regards to making any Paper Mario characters playable, but at least the series itself is continuing to be represented in some way.
Click to expand...

I feel the same way, then again why do people make a problem out of this anyway, I also agree that Paper Mario getting more Representation is amazing.

I wonder if character 7 will be released on October 7
I'll have to check it out.
I called it back in the Spirit Battle idea thread!
i wouldnt mind the drought that much if theyd at least put new spirits more frequently.
I think this ruins Paper Mario's chances to be in Ultimate, sadly. If he was a character then they would have saved those spirits till then.
You must log in or register to reply here.
Share:
Facebook Twitter Reddit WhatsApp Email Link
Top Bottom