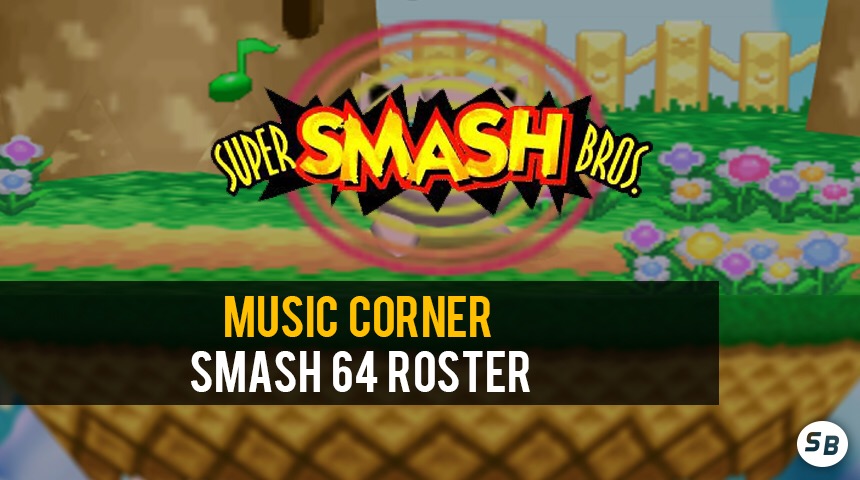 Hello, everyone, and welcome to the second edition of Music Corner! Here, we'll look at some musical tracks that weren't in Super Smash Bros. Ultimate but deserve recognition nonetheless. This series will also feature music selected by both you, the readers, as well as the Smashboards writing staff. There will be articles focused on music from a particular series, music from franchises that have yet to be featured in Smash, as well as music from recently revealed franchises.

Super Smash Bros. first debuted on the Nintendo 64 back in 1999 and was a major hit which managed to include all the core Nintendo series like Super Mario, The Legend of Zelda, and Pokémon. The game’s mechanics laid down the core foundation for what Smash is today. In this Music Corner, we’re going back to the basics and focusing on music from series introduced in the first Smash game!

Super Mario boasts some of the highest number of musical tracks in Smash, with 92 total (not counting victory jungles and the like). Do we need more music? Well, the answer is yes! Mario music has such a diversity of music ranging from jazz to classical, to everything else in-between. Maybe it’s because there are so many games within its library? However, despite the large amount of Mario songs, very few of these are from the sports titles. With so little tracks from Mario sports available, I want to focus on one of the sports spin-offs since these games don’t get much love in Smash. I feel this song is quite unique, catchy, and stands out among the current Mario music.

Kind of funny that a song called “Nuts and Bolts” would be included in a Super Nintendo Rare game and then there’s the XBox Banjo-Kazooie subtitled Nuts & Bolts. Donkey Kong doesn’t have a lot of songs without tropical influences so I think “Nuts and Bolts” is the best candidate. While this is a song I would love to see remixed by the Smash music team, you can also find fan remixes all over YouTube like this. This industrial song for Donkey Kong is something that we don’t yet have in Smash.


Eclipse of the Moon (Guitar Version)

Sadly, Hyrule Warriors never received any recognition in Smash - not even a Spirit. The Hyrule Warriors library has some amazing music which sets the mood of the high-paced, crowded battles one may find themselves in. This particular piece would go well with any hero vs villain battle.

If there’s one thing Smash is lacking, that’s Metroid Prime 3 music. It’s non-existent! This is a shame as it’s a great original soundtrack. One piece is the unassuming song called Rundas Battle. Rundas is a bounty hunter made out of ice who joins Samus and two others to stop Dark Samus. He ends up getting corrupted (spoilers ahead!) and this song plays during the battle. This song’s tone fits very well with the dark atmosphere of some of Metroid’s stages such as Space Frigate Orpheon or Norfair. This track hits all the right spots and really begs to be included in Smash.

Yoshi’s Wooly World received only two songs and had a stage cut. Granted, the stage was pretty crazy. Wooly World has some great music and I felt this peppy tune had enough spunk to fit a Smash match but also have the carefree and happy vibe the Yoshi games bring. It also references Yoshi’s Cookie through the title, so that’s a plus.

Pulled straight from Kirby and the Rainbow Curse which didn’t get any representation in Smash. This, much like the previous Yoshi song, has a nice blend of pep and urgency. This song would go great with just about any Kirby stage… okay, maybe not Fountain of Dreams.

I must admit, Star Fox music is not my strong suit. It has good music but to me, it all feels very samey. However, if you do some searching, there are some amazing gems. This one from Star Fox: Assault fits with Smash perfectly. It played during the final battle between the Star Fox team and the Aparoid Queen. For some background story, the Aparoids are a race of techno-insects that wish to technoform the galaxy which even claimed Pigma and General Pepper. This song conveys a sense of urgency and impending doom that conveys the crisis that the Lylat System was going through.

Super Training was one of the features in Pokémon X & Y that never returned to the series. In this mode, you could play minigames with your Pokémon where the goal is to try and pop Pokémon shaped balloons. The entire premise of “super” and “training” seems to go hand in hand. The energy of the song goes together nicely with the action on the screen.

Luigi’s Mansion is full of music that sets the mood and has a lot of mysterious music that brings out a sense of dread. This track, though, is a bit more active. It plays when Luigi is able to catch a ghost and must bring it in. That moment you capture the ghost is a struggle between the living and the ghostly. You can truly feel the struggle within this song during the energetic portions.

Earthbound/MOTHER is full of bizarre music and this song is no exception. It’s from the very start where the player fills the party’s names into the blank. This track’s strange vibes, complete with the chaotic background static and noise, would be a great fit for stages like Fourside and New Pork City.


Hurrah for the Champion

Congrats, racer! You won F-Zero. This track is played after winning a cup in F-Zero GX. Nothing feels better than winning a race and this track could give us the drive to push for the win in Smash.

AH, the Pokémon Rap. I still remember this from my childhood. Props to anyone who can sing them all! While this is originally from the anime, it would make an amazing addition to the Pokémon[\i] music library. It would be nice to see it become relevant again.

Author’s Note: What music do you want to see included in Ultimate or future Smash games? Let us know in the comments below!

As for music I want to see, maybe some music from games like Super Mario RPG? Though I have hopes that Geno will be released and have a whole slew of delicious remixes of those tracks. The fact that they aren't in the game at all yet, while tracks from many other Mario RPGs are, leads me to believe Geno could be delivering them soon.
Last edited: Oct 10, 2019
I still want a version of Pollyanna with lyrics.
Man, it's kind frustrating that there are so many great Nintendo game tracks out there that don't get the recognition they deserve because they weren't as popular or mainstream. There are some gems out there! For example, the gym battle music from Pokemon Black/White is awesome! It always gets me in the mood to really up my game! And btw, damn that Pokemon X/Y track was AB-SO-LUTE-LY LEGIT! I really have to play those games...
You must log in or register to reply here.
Share:
Facebook Twitter Reddit WhatsApp Email Link
Top Bottom