Former Bayonetta Actress Says She was only Offered $4,000 to Reprise Her Role 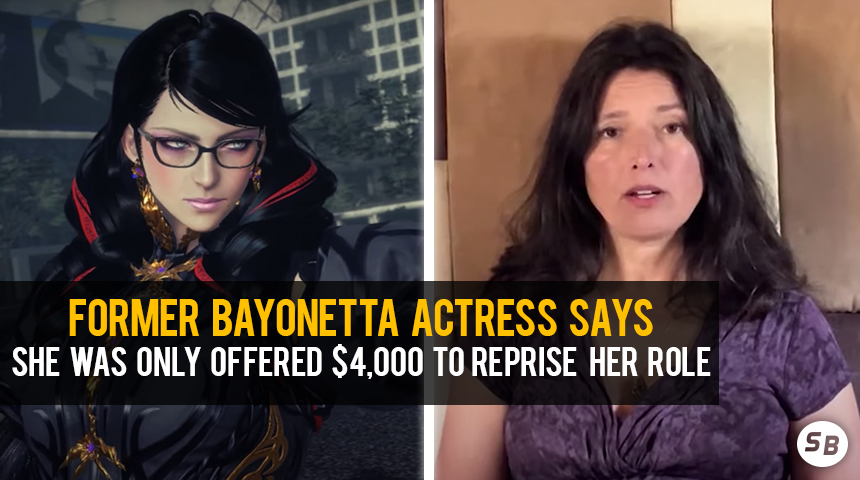 Update 10/18/22: Jason Schreier, forming writer for Kotaku and major gaming insider, has left the following. Several other sources have corroborated with Jason's version of the events as well:

Last weekend, Bayonetta's former voice actor called for fans to boycott the new game, saying she was offered just $4,000 to work on it. Her Twitter videos went viral and stoked a debate over voice actor wages. But the full story is much more complicated... https://t.co/qPa8grfCtq

If true, this would mean Hellena was offered more than what she initially claimed.

A Message from PlatinumGames pic.twitter.com/5ym1JxtBBn

​
Update: 10/24/22: Hellena has responded to the claims above. In response to Hellena's recent tweets, Jason Schreier had this to say:


Former Bayonetta voice actor Hellena Taylor now confirms my reporting that she was offered at least $15,000 and that the final offer was for a cameo, despite the claims in a video that went viral last week: pic.twitter.com/VD60B83ICh


English voice actress Hellena Taylor - who has voiced Bayonetta in all of her appearances with the exception of the upcoming Bayonetta 3 - has released a series of videos expressing her thoughts on why she isn’t returning for the latest installment of the franchise. You can check out Hellena’s videos in this twitter thread:

Hellena states that although the Bayonetta franchise has made $450 million in net income (not counting merchandise), she was offered a low amount of money to voice the titular character throughout all of Bayonetta 3. Upset by this amount, she wrote to PlatinumGames Vice President Hideki Kamiya to ask how much she was worth to them. Kamiya responded by saying that they would offer her only $4,000 for her to voice the entirety of her part in Bayonetta 3. The time and effort put into a role such as Bayonetta is not something a mere $4,000 can cover, as Helena states that she can’t even afford to run a car and at one point in her life was suicidal from the anxiety of possibly having to live on the streets.

PlatinumGames issued a statement earlier this month in regards to Hellena not returning, saying that the decision to recast her was due to quote “various overlapping circumstances.” Hellena has stated in her videos that scheduling issues were not the case at all as she had more than enough time to voice Bayonetta again if needed. Bayonetta has since been recast to be voiced by Jennifer Hale, a much more high profile voice actress. Hellena states that while she wishes Bayonetta’s new voice actress the best of luck in getting future jobs, Hellena says that the new VA does not have the right to say she is the voice of Bayonetta after years of Hellena voicing the character.

Hellena urges fans of the series to boycott Bayonetta 3, as she wishes to stand in solidarity with others who have also been greatly disrespected for the talents they produce. She also urges fans to use the money they had planned for the game and donate it to charity. It is not uncommon for voice actors to receive little pay for the large amount of work they produce. Despite the anime film Jujutsu Kaisen 0 making over $30 million overseas and becoming the 4th highest grossing anime film in US history, its English dub voice actors were paid as little as $150. Recently, Crunchyroll refused to have a meeting with the SAG-AFTRA union to negotiate a potential contract. This led to voice actor Kyle McCarley announcing that he would not be returning to voice Mob Psycho protagonist Shigeo "Mob" Kageyama for the then upcoming third season.

Since Hellena’s statement, PlatinumGames VP Hideki Kamiya has made this tweet in response to the accusations. Hideki’s tweet has received a lot of backlash since it was posted. No official statement from either PlatinumGames or Nintendo has been given as of this writing, though we will update you if anything new comes up.


Author’s Note: While the recent developments may show that Hellena's claims might not be true, please do not let this specific case take away from the treatment voice actors receive in general. They still deserve much better as mentioned in the previous examples.
Last edited: Oct 24, 2022

She made the right choice. 4000 dollars is chum change.

I am also appalled Crunchyroll refused to meet with a union. This kind of treatment to VAs is really disgusting and they should be treated with respect in the US.
True just sad that it had to be Bayo 3 such a anticapated game! I guess that is what emulation is for!
Also its hilarious that Bayo Fans are Called bayonutters and that a Woman in this day and Age uses That Term Truely a Woman and actress Of Culture!
I have 0 respect for the franchise and character but even I think that’s terrible
Thats like 2 months rent MAXIMUM
Absolutely disgusting. VAs should be much better-compensated for their work, not just for this egregious example, but across the board. And should be paid royalties when their work is used in commercials and at events and such.
While I personally don't like Bayonetta all that much, being a voice actor warrants receiving more than just $4000 on one very important character. Sure, $4000 may seem like a lot of money, but it really isn't when you consider how much it costs to live in a house, or even just a small apartment.

Platinum offered Hellena Taylor between $3k and $4k per session for at least 5 sessions, according to two people familiar with the deal and documentation viewed by Bloomberg. In response, the people said, Taylor asked for a six-figure fee and residuals. Negotiations fell apart

Taylor's videos have received more than 9.5 million views on Twitter and led to a deluge of calls from fans and pundits to boycott Bayonetta 3. But accounts and evidence reviewed by Bloomberg make it clear that those videos were not the whole story

And if the guy who built his career off of accurately exposing insider info isn't enough:

I can corroborate @jasonschreier's reporting over the Bayonetta 3 pay dispute. A sad and messy situation.https://t.co/CMTAZkSzKE

Seems a lot more reasonable tbh.
Six figures for Bayonetta? How popular does she think this series is? Critical acclaim is not the same as sales.

Either way, a lesson in not jumping to conclusions here.
Last edited: Oct 18, 2022
Kamiya is no saint but it's wild how he was effectively bullied off the internet over saying a false claim is false and everyone is okay with that. Not even going into all the heat other Platinum staff and Jennifer Hale got.

I guess goes to show it's better to fact-check rather than jump on the gun without knowing the full picture.
Last edited: Oct 20, 2022
So we finally got what seems like more of the truth


It has come to my attention that some people are calling me a liar and golddigger. I feel the need to defend myself and my reputation in the industry. See thread #PlatinumGames #Nintendo #Bayonetta #Bayonetta3 #Bayonutters #Boycott #NintendoEurope #NintendoAmerica #NintendoJapan

Wow, I can't believe I fell for that story without hearing both sides. All Taylor has done now is made legitimate VA complaints look like complete jokes now. And to have the audacity to claim that only she can be Bayonetta?! I almost feel sorry for Kamiya for having to deal with so much crap. At this point, I'm buying Bayo 3 out of spite now. And if PlatinumGames and any other gaming company has any honor whatsoever, they will permanently fire and blacklist her.
Again another reason I don’t jump into conclusions
You must log in or register to reply here.
Share:
Facebook Twitter Reddit WhatsApp Email Link
Top Bottom