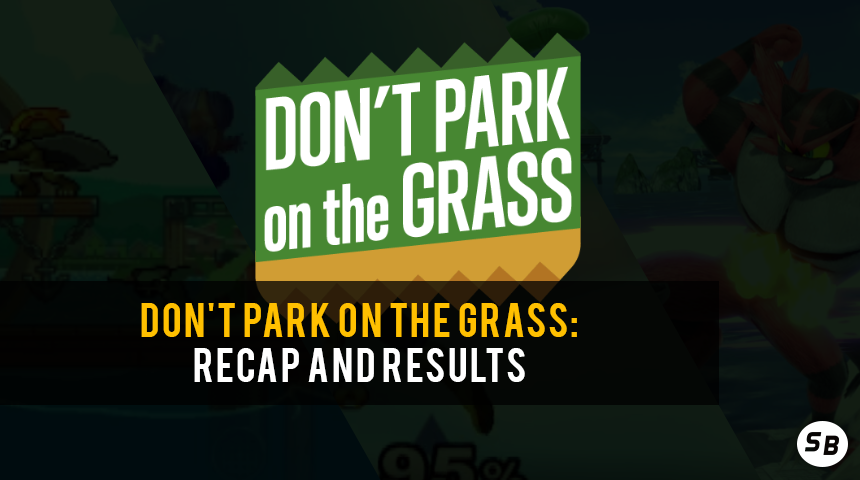 What to Take Away from Ultimate Top 8

Everyone is Broken
With 11 different characters being played in top 8, the future is looking bright for this game’s character diversity. Even characters like Incineroar, Toon Link and Dedede, while not considered top tier threats by notable players, managed to have presence on the main stage. Snake, previously believed by many to have lost his edge after Brawl, was the character who claimed first place, proving that there’s so much left to be discovered.

Experience is King
While we had many new faces in top 8, it ultimately ended with a Panda Global Grand Finals. Panda Global sponsored Brawl veterans ESAM and MVD faced off in the final two, both using the characters from back when they started playing the game. All those years of experience, combined with the fancy new tools Snake received, finally paid off when MVD claimed first place after beating ESAM 3-1 in both Winner’s Final and Grand Finals. This seems to be the case across the board, where many Brawl veterans made their triumphant return in Ultimate. We may need to get used to it.

Notable Wins: Rocky, Fiction​
What to Take Away from Melee Top 8

Spud is Criminally Underrated
If you had never heard of Spud before this tournament, you’ve been missing out on one of the best Marths in the game. The New Zealander’s cocky attitude and fast/flashy style make him an obvious crowd favorite and an entertaining player to watch. While his year may have started with a lack-luster 65th place finish at Genesis 5, Spud has shown again and again that he is more than capable of keeping up with top 50 players. Prior to Don’t Park On the Grass, Spud managed to take Bridgetown Hyper Blitz, a Portland Melee tournament that boasted a surprising amount of out of region talent, over players like Aaron “Professor Pro” Thomas, “Moky”, and “n0ne”. At DOPTG, he continued to show his prowess in a variety of matchups - beating Kyle “Kalamazhu” Zhu, Hax$, and 3-0’ing Zachary “SFAT” Cordoni.

Zain and SFAT Fell Short of Expectations
Going into Don’t Park On the Grass, Zain and SFAT were both held as clear favorites to win the tournament. In many ways, Zain and SFAT were also the players with the most to prove this tournament. Zain has been trying to prove that he’s a cut above the rest of the field, and SFAT has been trying to regain a level of consistency in his play that has seemingly been waning during the last half of the year. Both players underperformed this tournament, with Zain failing to overcome his Falcon problem, and SFAT failing to overcome his struggles with Marth. Realistically, this result will barely affect their final placings on the 2018 MPGR rankings, but it will be exciting to see how both players try to tackle these issues going into 2019.

Swedish Still Has the Fire
Swedish Delight’s Sheik is an enigma wrapped in cool ninja clothes. During the most recent iteration of Smash Summit, Swedish struggled with a lot of hand pain and it clearly showed in his play. During winner’s side, it looked like we were going to see more of the same. Swedish looked a little shaky during his set versus n0ne, but he managed to barely clutch out the close game 5 set. In losers, however, we saw a much more confident, put together Swedish. Swedish started his losers run with a dominant showing against Hax$, and he managed to use that momentum for the rest of the tournament, powering his way through Losers Semi-Finals and Loser Finals to meet S2J in grands. Swedish managed to take S2J to last game, last stock for the tournament, and while he lost this time around, this won’t be the last great run we’ll see from the Tristate Sheik.

S2J is Surprisingly Consistent
S2J is surprisingly consistent. I went into this tournament thinking that S2J was a dark horse contender for victory. Sure he had great odds against Zain and SFAT, sure he had some great showings this year, but when I actually went to check the numbers, I gotta be honest, I was blown away. S2J has finished within the top 8 of 14 out of the 19 major tournaments he’s attended this year. S2J has shown that he’s capable of beating any player outside of the top 6. The only thing that is really holding him back from overtaking players like Wizzrobe, Zain, and Axe is his inability to consistently get “god” wins. All in all, it’s an exciting time to be an S2J fan, but he is going to need to start making some big moves in 2019 to keep up with players ahead of him.

What to Take Away from Rivals Top 8
While all eyes may have been on Ultimate and Melee, Don’t Park on the Grass was also one of Rivals of Aether’s most important events for the year, marking the Rivals Championship Series’ last event before the championship at Genesis 6. With 8 of North America’s top 10 Rivals players in attendance, as well as some notable upsets leading up to top 8, it was quite the event to behold.

Bullets’s Breakout Performance
While he’s historically been slept on due to his inactivity, Bullets’s run at Don’t Park on the Grass has shown just how well he can do when he does show up. After losing to Eli “Dunk” Stein in pools, Bullets made it all the way to top 8, eliminating both Nathan “Jorane” Weir and Isaac “DolphinBrick” Leslie in the process, before kicking off top 8 with a 3-0 victory against Corkxx.

FullStream’s Elliana is Sick as Hell
After making a name for himself with his Wrastor and dominating with Ori throughout late 2017 and early 2018, both of whom have been considered among the best characters in the game at their peak, FullStream spent the entire tournament using Elliana, a character that’s largely been considered underwhelming, and even dysfunctional in some regards. Nevertheless, with victories over MSB and ZeeBee, his performance at Don’t Park on the Grass shows that even low-tier characters in Rivals are a force to be reckoned with in the hands of a top player.

Focusing on Other Games Isn’t Holding Players Back (Yet)
Many of Rivals’ top players - including FullStream, Windows and CakeAssault have been focusing on Ultimate for the past week, so a big question was on everyone’s mind throughout the event: how will this affect their performance in Rivals? And their performance here shows that, at least so far, it hasn’t. Perhaps it’s just because it hasn’t been long enough for any rust to develop, but when three out of the event’s top four have been focusing more on Ultimate than on Rivals, and the winner has expressed an interest in continuing to focus on Ultimate going into Genesis 6, it may be worth seeing where this goes in the future.

Update: Super Smash Bros. Ultimate's results have been extended to include the rest of Top 32, as well as character icons for each player.
Last edited: Dec 19, 2018

I would be nice to see what characters were used.
ESAM and MVD- best buddies and training partners- facing off in both Winner's and Grand Finals.

It didn't really matter whether ESAM won with the widely expected top tier Pikachu or MVD won with the widely slept-on Brawl veteran Snake: it was just awesome watching their matches- and everyone else's for that matter, too (A Dedede, Toon Link, and Young Link main in Top 8!? Man!).

If Smash 4 wasn't already dead, it is now.

Rizen said:
I would be nice to see what characters were used.
Click to expand...

Right? One of the most important pieces of info and they left it out.
Magister's and 2ManyCooks's links don't lead to their Twitters; they lead to KJH's and Luigi Ka-Master's instead, respectively.

Rizen said:
I would be nice to see what characters were used.
Click to expand...

EventHubs had the character listings, but MVD went solely Snake the whole event. a common theory is that since many players came over from Sm4sh to this not many had experience from the Snake Matchup, with the exception of ESAM who has dealt with Snakes for a decade prior.
Spud is f*cking amazing, wtf. The second Zain for sure. I thought it was just a fluke that he beat a bunch of top 100 players a few weeks ago in Bridgetown Hyper Blitz, but extremely impressive performance from the New Zealand Marth!


Also this tournament was ran very well, shoutouts to the TOs, especially https://twitter.com/aidencalvin and https://twitter.com/EndGame_TV.
Last edited: Dec 18, 2018
Oh hey, I remember Spud! There was an article and interview posted here on Smashboards a year or two back IIRC. I should watch this tournament and see.
Added characters.
It's pretty cool to see both Brawl/Smash4 players and Melee players can do well in Ultimate. Although right now we're seeing the former do better, I wouldn't doubt that as more mechanics and uses are found, we'll see that gap bridge closer.
Last edited: Dec 19, 2018
I think its cool to see more rather then in the top 5, Also it was great to see snake take the top of the tournament. so far this game is showing great potential
So cool that the first smash ultimate Tourney just went down
Umm hellooo? Is nobody gonna acknowledge the fact that a Luigi got Top 8 at a relatively large melee tournament? (Not like it's a major or anything, but still...) Luigi mains ftw And congrats to all the people who got some major upsets across multiple games this year!
I knew this game had more balance than 4 could ever dream of, I mean, characters like Pichu in the top 8 at tournaments? Finally, a game where you can main anyone and won’t be demolished because of it.

DeltaSceptile said:
I knew this game had more balance than 4 could ever dream of, I mean, characters like Pichu in the top 8 at tournaments? Finally, a game where you can main anyone and won’t be demolished because of it.
Click to expand...

How is this a surprise? Pichu is a clone of one of the best characters in Ultimate right now.

PhantomShab said:
How is this a surprise? Pichu is a clone of one of the best characters in Ultimate right now.
Click to expand...

Yeah, but by comparison to how he was back in melee, it’s pretty impressive.
Top 8 in Ultimate: At least 8 different characters
Top 8 in Melee: 5 characters (though one of them is Luigi, is that even allowed? Kudos)
You must log in or register to reply here.
Share:
Facebook Twitter Reddit WhatsApp Email Link
Top Bottom