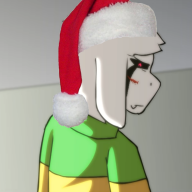 Administrator Premium BRoomer
So much for friendship huh... · From somewhere near Mt. Ebott