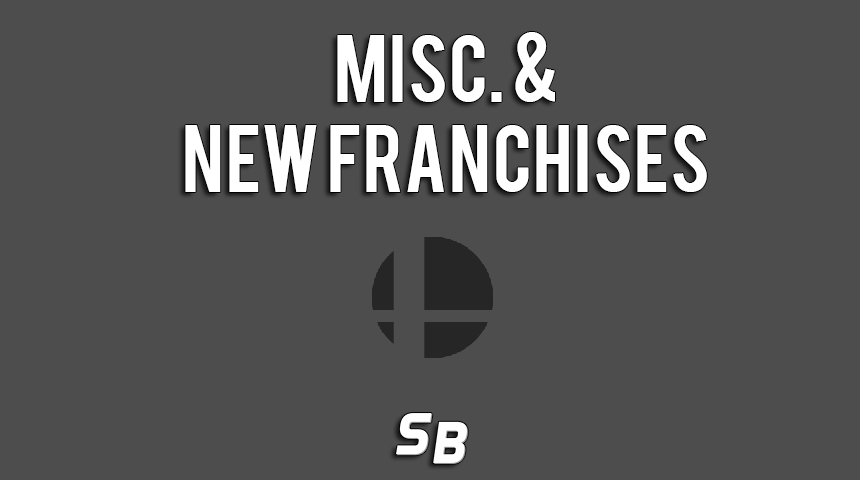 Smash has a history of introducing one-off characters from smaller franchise and to finish this off, we haven't quite covered new franchises yet, but there are plenty of other new characters to look into!


New Characters​
There's quite a few other franchises to look out for. Code Name S.T.E.A.M. seems like a smart choice at first, though it doesn't actually offer much to work with - much of its cast consists of historical figures and public domain characters. Isaac from Golden Sun, and Ray 01 from Custom Robo are fan favorites to make it in. An ARMs character is definitely plausible, and Dillon from the Dillon's Rolling Western games is also not impossible. Beyond that, it really comes down to what Nintendo wants to promote and what the team finds interesting.

For retro characters, it's a bit more difficult to pin down, but Takamaru, Mach Rider, Excitebiker, and Balloon Fighter all seem like good candidates, if we see any.


Returning Stages​
Any new stages with no character don't feel likely but it's hard to tell.


New Stages​
Any new characters that get added for their own franchises will probably get their own stages.

Author's Note: What are your thoughts on Nintendo's newer and lesser known IPs? What new franchises would you like to see in Smash for Switch? Let us know in the comments below!
Last edited: Jun 9, 2018

ARMS is my best bet.

Chibi Robo and Golden Sun are fair game.
I don't know why people want people want other ARMS people besides Spring Man. One is enough!
Last edited: Jun 10, 2018
Arms, Golden Sun, Style Savvy, Dillon’s anything, and a Ballon Fighter character
From the newer franchises, I could see Dillon and maybe someone from ARMS as possible candidates.

As for Retro and lesser known franchises, my possible candidates would be Takamaru, Excitebiker, Ayumi Tachibana and Balloon Fighter.
I would really enjoy excitebiker, I think he would be very unique.
Takamaru would be a really cool retro representative, Issac is like an old outcry wanting to be heard, i dunno how successesful ARMS was or if it's too soon to deserve a spot (but i has cool characters that would be fun to play).
Oh, i still dream of a Advance Wars character too...
Andy from Advance Wars in Smash Bros.

One day, some day...
If ya'll wanna go retro, ya'll need to look at the Kunio-kun series. There's a whole metric lot of games on the Famicom back in Japan, and the few that made it overseas became instant icons, such as River City Ransom/Street Gangs.
But considering Kunio himself got kinda revived, I'm not exactly sure if you can still place him in the same groups as other retros.

As for newer franchises? ARMs, definitely. There's no way that we're not getting an ARMs character unless Sakurai sees it as a bit redundant, but then again he let Ryu in soooo...
You forgot this;

ARMS, Rhythm Heaven, Dillon, and maybe Chibi-Robo
Hoping and praying for Fatal Frame.
My first post!
I doubt characters such as Little Mac will return.
Characters with low-key games can be expected to be given the boot (kicked out).
Fossil Fighters is my hope. ARMS and Dillon's Rolling Western are my predictions.

IntellectualLemon said:
My first post!
I doubt characters such as Little Mac will return.
Characters with low-key games can be expected to be given the boot (kicked out).
Click to expand...

If that was a reason, he wouldn't have made it on the roster in the first place.
Hopefully Qbby from the BOXBOY! series makes an appearance
I WANT TO SEE ISAAC IN SUPER SMASH BROS!!!
I Don't Think Takamaru Won't Make it Because he's not very Popular Enough.
I think he might be in as a Japan Only Character Just Like:
Marth,Roy,and Lucas.

Overall I Like him Better as a Assist Trophy but it Would be very Difficult to put him in.

He has a very low chance.

Hopefully This will Satisfied anyone so Good Day

Kirby Dragons said:
Fossil Fighters is my hope. ARMS and Dillon's Rolling Western are my predictions.

If that was a reason, he wouldn't have made it on the roster in the first place.
Click to expand...

Good point. . .
Well, now the Smash Bros. Ultimate roster has been revealed, we can see for ourselves. . .
Can't wait to give Ridley and Snake a go.
You must log in or register to reply here.
Share:
Facebook Twitter Reddit WhatsApp Email Link
Top Bottom