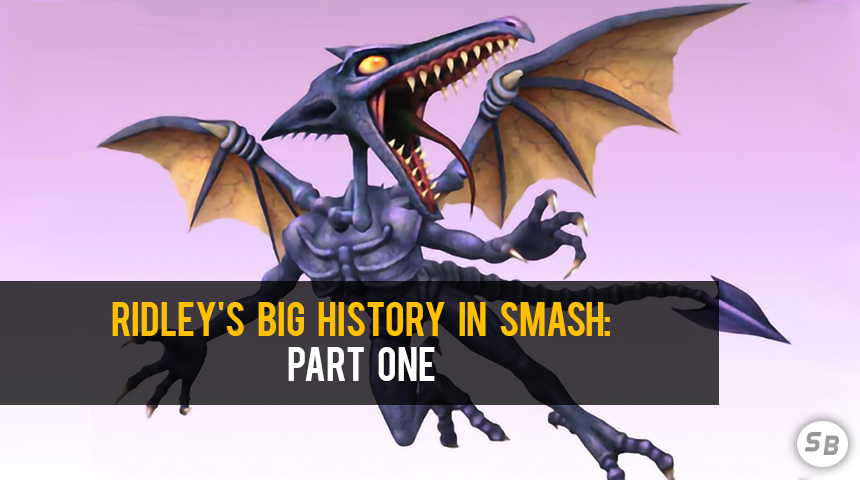 Smash fans are vocal about letting Masahiro Sakurai know who they want on the roster. Before Super Smash Bros. Ultimate, one of the longest-requested characters was the Metroid series antagonist, Ridley. By unveiling the big purple dragon at E3 2018, Sakurai finally answered their prayers. Ridley’s history with the Smash series starts at the beginning.

Ridley originated on the Nintendo Entertainment System’s revolutionary action-adventure game Metroid. Samus Aran, the franchise's protagonist, visits Planet Zebes and ultimately defeats him. Like a leech, he terrorizes his eternal nemesis by repeatedly returning from an apparent death. He is rarely the last battle in a Metroid game, but fans will agree that their fights are among the most memorable. Few Nintendo characters have a more violent rivalry than Samus and Ridley. 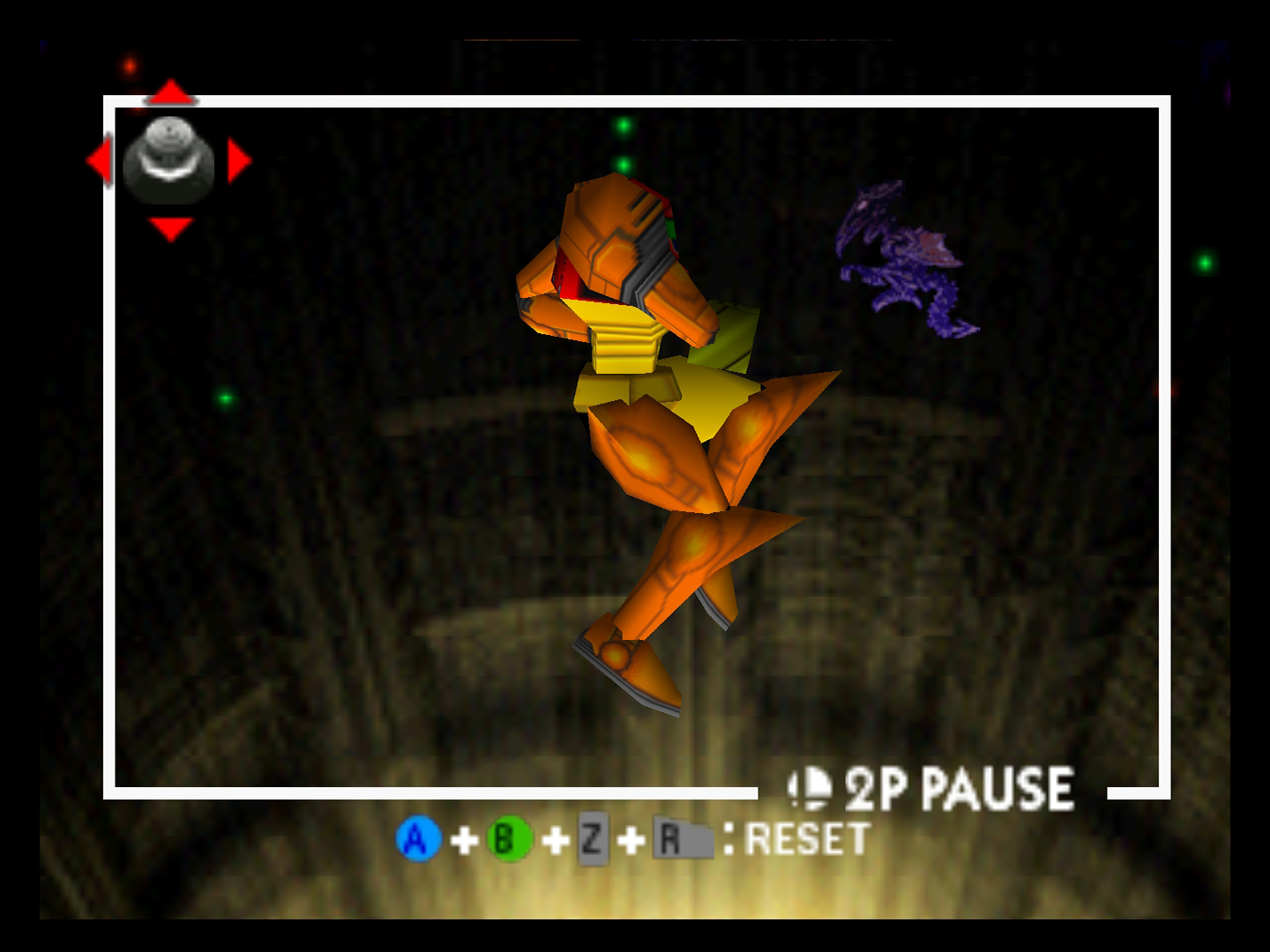 Metroid received two more titles with Metroid II: Return of Samus and Super Metroid before its first hiatus. In 1999, Samus debuted in Super Smash Bros. for the Nintendo 64 as a playable character. Ridley also appeared as a background sprite on the Planet Zebes stage. Appearing in Nintendo's popular crossover games despite Metroid's long hiatus is impressive.

Smash fans anticipated the reveal of Super Smash Bros. Melee for Nintendo Gamecube at E3 2001. During the game’s trailer, Ridley clashed with Samus yet again. People at the conference cheered because they thought this meant he was playable on Melee’s roster. That assumption helped lead to him obtaining a significant fan base that wanted him on the roster. 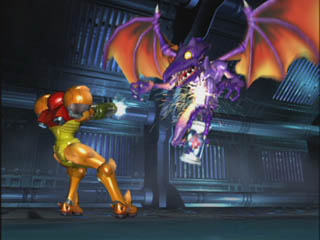 Nintendo also announced Metroid Fusion and Metroid Prime at E3 2001, both being critical and commercially successful games featuring Ridley. This lead to more Metroid games like Metroid Prime 2 and 3, a remake of Metroid in Metroid: Zero Mission and even a pinball game. Due to the franchise’s successful revival, fans came together on popular websites like Smashboards, GameFAQs, and YouTube to discuss Ridley’s potential inclusion for next game. The Internet planted the seed for a devoted character fan base that influenced Ridley’s roles in Smash.

Since the Wii was releasing in November 2006, fans expected a new Smash game unveil at E3 2006. Nintendo unveiled Super Smash Bros. Brawl with a sweeping cinematic trailer confirming five newcomers. One of these was Zero Suit Samus, which foreshadowing Metroid receiving lots of content.

GameFAQs's Rate Their Chances for Brawl thread showed that most participants expected Ridley to be playable. Three polls, two from the defunct Nsider forum, had him among the Top Three requests for Brawl. Only Sonic the Hedgehog and Diddy Kong did better. Ridley had over 16,000 posts across three threads, making him one of the speculation community's most popular characters. These anecdotal evidences illustrate how long fans had pushed for Ridley’s inclusion.

Remember the “Too Big?” argument? Here is the first recorded appearance on Smashboards. =TF=Omega said that Ridley was too big and that, as a dragon, he would not fit in with other playable characters. Xianfeng, who ran the first thread, argued with him and began one of the speculation community’s most contentious debates. The “too big” argument became a meme, resulting in fan art and videos on the Internet for over a decade. No other character arguments were capitalized on by fans or even several times by Sakurai.

In June 2007, Smash Bros. DOJO!!! confirmed an arrangement of Super Metroid's Vs. Ridley, sparking speculation about his role in Brawl. Like earlier Smash Bros. DOJO!! updates, fans agonized over literal words on what it meant for Ridley's fate. Some worried that this was hinting at a boss role because Sakurai had not revealed him as playable. More optimistic people believed that a reveal was inevitable. One thing was for sure—he would make a big appearance. 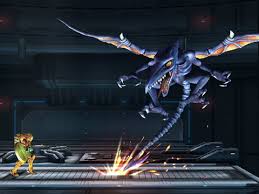 Ridley appeared twice in Brawl’s Subspace Emissary. The first was in his Super Metroid form, where he grinded Samus across the wall until Pikachu shocked him. The second pits Donkey Kong, Diddy Kong, Captain Falcon, Olimar and R.O.B. against Meta-Ridley from Metroid Prime. Ridley, along with Porky and Galleom, is one of the only three characters with two boss fights. According to a The Cutting Room Floor article, Sakurai planned him as an Assist Trophy but upgraded him to a boss. That didn’t stop fans from criticizing Sakurai for not including Ridley. Sakurai responded in May 2008's Nintendo Power that Source Gaming transcribed with:

Interviewer: There was a rumor at one point about Ridley being playable. Was that ever a consideration?

Sakurai: I think that would probably be pretty impossible. [Laughs] If we had put our best efforts into it, we may have been able to do it. But he might have been a little slow. Would that be all right? [laughs]
Click to expand...

Brawl added many popular requests, so Ridley’s exclusion stuck out like a thorn to many fans. While Sakurai didn’t reference his size, he considered him "pretty impossible.” Some considered this proof that he was too big to be playable, and that people should move on. More optimistic people argued that Sakurai didn’t consider Ridley before and would do so next game. Fans marched on, continuing the fight for their beloved Space Pirate leader.

Author's Note: The next part of Ridley’s big history will cover his roles during Super Smash Bros. 3DS & Wii U and Smash Ultimate. What were your memories with Ridley? Did you support him as a potential character during Melee or Brawl? We would love to hear your thoughts.
Last edited by a moderator: May 29, 2019

Still seems surreal that Ridley is in smash after all this time.

Love playing as him to, I was always worried he would never feel right to play as, but they did a good job of doing him justice.
Glad to finally have this out. Really am pumped to see Part 2!
Ridley is kinda like inkling as well as shulk was for me in 4; I’m absolutely thrilled he got in, one of the characters i was most excited to see, but I simply can’t stand their playstyle. Every time I’ve tried to play those characters I simply don’t find it enjoyable.

Still though, just like shulk I love that Ridley is finally in, and hope he stays a regular, even if I’m never gonna use him intentionally.

I also loved some folks reactions to his reveal, some well known smashers were clearly in that “he’s too big” camp, and his reveal seemed to fry their brains a bit.

Never too big for my heart.
I don't think we'll ever see something quite like Ridley's history in Smash speculation again, with so much demand and longevity, so many arguments for and against, and his importance meaning he'd be in the game in some form or another (meaning a guaranteed confirmation or deconfirmation), it was like the perfect cocktail for speculation. I still find it unbelievable that he finally got in, even almost a year later, I'm not sure it'll ever quite settle in and become normal for me that Ridley is in Smash.
Ridley is a big deal

King Sonnn DeDeDoo said:
Still seems surreal that Ridley is in smash after all this time.
Click to expand...

He was my most wanted character, and I actually had the opposite reaction to his reveal; my reaction was pretty much: "About ****ing time". You can only be drug through the mud so many times before becoming salty. Sakurai all but practically deconfirmed him, but the ballot save him.

MasterOfKnees said:
I don't think we'll ever see something quite like Ridley's history in Smash speculation again, with so much demand and longevity, so many arguments for and against, and his importance meaning he'd be in the game in some form or another (meaning a guaranteed confirmation or deconfirmation), it was like the perfect cocktail for speculation. I still find it unbelievable that he finally got in, even almost a year later, I'm not sure it'll ever quite settle in and become normal for me that Ridley is in Smash.
Click to expand...

Agreed. That’s why Ridley is such a fascinating character to discuss his speculation history. No character has been so prominent that the biggest argument against him became a popular meme. Ultimately, Ridley serves as a reflection for why the speculation community exist the way it does, because of the flaming passion within Nintendo fans when the biggest gaming crossover series is heading towards another release. Really, only Geno comes close towards approaching the notoriety that Ridley had in speculation and that’s because he’s the original bandwagon character that made a come back when Sakurai brought him up again.
Ridley's legacy in Smash speculation is so cemented. I was originally biased towards the character because I dislike Brawl Ridley. Eventually, I realized how much the character was absent, that juicy A rank and badass Nintendo superstar and jumped on the bandwagon. I wanted him in after seeing the official arts of Meta Ridley and Omega Ridley and Super Metroid 2 Ridley's sprite. Other M Ridley's boss fight is actually badass asf. I wasn't a long time supporter. I started supporting Ridley really late.

When Ridley suddenly was confirmed, I still really felt a gap closing, like a missing piece to the puzzle.

Ridley deserved to be in.
I don't actually care about Ridley, or Daisy being playable, but I would want to have Waluigi, Daisy, and Ridley all be playable.
You must log in or register to reply here.
Share:
Facebook Twitter Reddit WhatsApp Email Link
Top Bottom