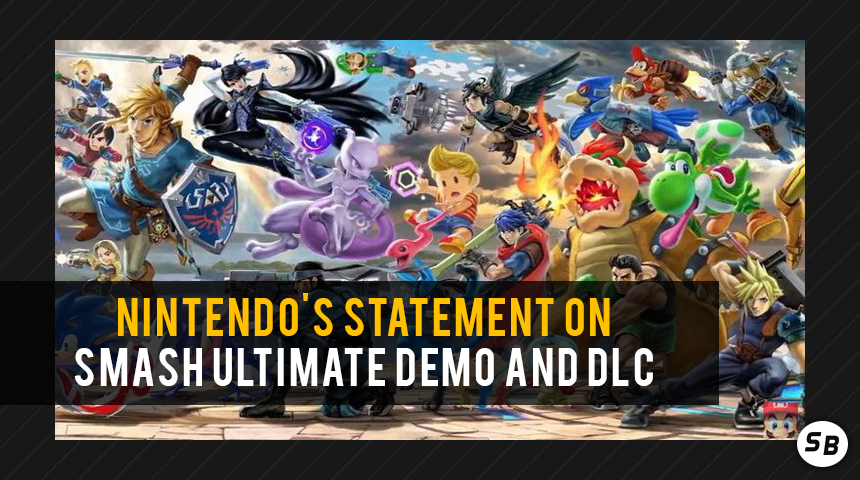 At Comic-Con last weekend, IGN spoke with Nintendo's Bill Trinen about Super Smash Bros. Ultimate - Two answers in particular; the possibility of a demo down the road and DLC.

When asked if we would see a demo before release similar to ARMS Global Testpunch or Splatoon's Global Testfire, Trinen stated:

“Very good question. Right now they’re focused very much on getting the game ready. We have a few other things to talk about down the road between now and when it launches in December. We’ll hopefully have some news on that as we get closer to launch.”
Click to expand...
When asked about Downloadable Content down the line, this was his statement,

“Obviously that was a big part of the Wii U game, but part of Mr. Sakurai’s approach is really focusing on getting the game done, and then once he has the game done, he’ll start to make some decisions about what he want to do. …with other characters or DLC, things like that. Whether or not he decides to do DLC again, or whether or not he decides this is the ultimate edition and there’s nothing more I can fit in there. We’ll have to see as we get closer to launch.”
Click to expand...
You can see the whole interview here,


Author's Note: What are your thoughts? Do you want a Demo and DLC? Are you excited for the thoughts of t hose? Let us know in the comments below!
Last edited: Jul 24, 2018

Well, overall, it's uhh, a pretty non-committal response all around. Guess we'll just have to play the waiting game for a bit longer.
I guess we could get one eventually before release but judging by Bill Trinen's response. It seems to not be a top priority or Sakurai just wants to focus on the game. We could get one but we will have to wait for now.
Its best to finish developing the game first, since we don't want the devs to be sidetracked when making the base game, I noticed that the Mania team also had a similar feelings to DLC they had no plans but they decided on it because of the game's success. I don't want DLC to be a fix for any game...
It's not like Trinen can say anything else. He's only allowed to give non answers.

It's a more polite way of saying "next question, please".

This is the kind of thing they never utter until revealed in a Direct.
There's also his slipup of saying "Xenoblade Characters" in that interview. Though I'm of the opinion he just forgot Shulk's name and wanted to cover his bases by giving a plural.
Give me something to chew on Nintendo... I'm dyin here
Smash is probably something that simply doesn't need a demo. Everyone knows what it's like and it's easily one of their biggest sellers. Smash 4 had a demo on 3DS, most likely so people could see what a hand-held version would be like.
The 3DS demo was to promote 3DS sales. The demo was to bring hype for the early 3DS release so that people would be more likely to buy both versions of the game, instead of just the Wii U version. I think it worked out pretty well. This time there's only a Switch version so I don't see a need for a demo either.
Last edited: Jul 24, 2018
A demo of a new Smash would be like getting a demo for mario kart 8 deluxe before it was released. It really doesn’t make sense.

The 3ds version needed it so people would buy it.
man, getting news for ultimate has really been a slow trickle
the most exciting thing we get are remixes
I hope there is a demo, the stupid thing on 3DS was a lot of fun, probably because it was handled so questionably
I don't think the 3DS version really needed sales help with a demo considering it blew Wii U Smash sales out of the water. Like, doubled its sales, if not more. A "Global Testsmash" would be a nice stress test on the servers and would generate hype/interest. Smash is a big series but you shouldn't take that star power entirely for granted.

It's just smart.
Tbh, Imma cool with waiting it out; A Smash Ultimate demo sounds nice and all, but I would much rather have them focus on getting the game ready. Although, if we DO get one, let's go. If not, whatever.

As for DLC, sure, why not? It can make up the fact that we ain't gonna get too many newcomers in the base roster.
Last edited: Jul 24, 2018
Zapp Branniglenn said:
There's also his slipup of saying "Xenoblade Characters" in that interview. Though I'm of the opinion he just forgot Shulk's name and wanted to cover his bases by giving a plural.
Click to expand...
Or there was a planned character(s) last he knew

I would love a demo but DLC is WAY too early to talk about.
If they say there's going to be DLC before they even finish the game, people will just complain that content should have just been included into the base game.

You can't really get away with announcing DLC until after launch without pissing people off and even then there will be whiners. Understandably so though, given what game companies have been getting away with.

I get the feeling they'll start pumping out a ton of echo fighters as DLC. They'll be relatively easy to make because you really only need to make slight variations of existing moves, like the custom specials in Smash 4. Except instead of hidden away in some mode no one plays, ithose custom variations on moves will just be tied to various echo fighters that can be toggled like costumes. That's my guess anyway.

If they do put out unique characters for DLC I'm guessing it'll be Waluigi for sure, and then something out of left field like Goku or Master Chief.
dangeraaron10 said:
I don't think the 3DS version really needed sales help with a demo considering it blew Wii U Smash sales out of the water. Like, doubled its sales, if not more. A "Global Testsmash" would be a nice stress test on the servers and would generate hype/interest. Smash is a big series but you shouldn't take that star power entirely for granted.

Keep in mind that the 3DS version of Smash 4 was the original version Sakurai wanted to make, but was convinced to put it on the struggling Wii U.