The Even Bigger Balc: Long Live the Kong 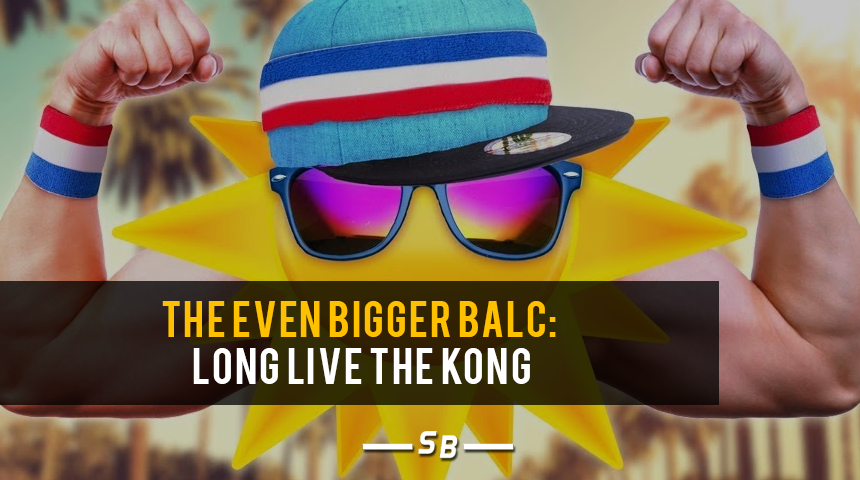 This past weekend we saw the return of one of the greatest Project M tournament series since its development shut down: the Bigger Balc series. With 427 attendees, the tournament marked a new high for the ambitious Super Smash Bros. Brawl mod. It was even streamed on Twitch, a task many other PM tournaments have shied away from in recent years. While the organization and attention it received definitely made a statement on their own, the results had a lot to say as well.

There were several story lines to keep track of going into this tournament. We had Jonathan “Sosa” Sosa trying to solidify his spot as the best PM player for the year, Xayya Thomas “ThundeRzReiGN” Thammavongsa and Nick “Flipp” Flippides’ return to the scene and a slew of other players who were more than eager to make a name for themselves at the largest PM tournament to date. While many of the story lines played out as viewers expected, there were also a number of upsets that managed to shake up the public perception of the scene.


The Difference between Failed Expectations and Accurate Predictions

Going into the Even Bigger Balc, Sosa and Malachi “Malachi” Covington were considered the two heavy hitters to watch out for. Sosa, the illustrious Wario main, definitely lived up to his number one seed, defeating players like Arjun “Llod” Malhotra, ThundeRzReign and Raseen “BaconPancakes” Khan on his journey to grand finals. While the winners finals between ThundeRz and Sosa was a nail biting game 5 set, the rest of Sosa’s matches were dominant and showcased the very real gap between him and the rest of the playing field. For many watching the tournament, it felt as if Sosa might simply walk through bracket without being pushed to his limit.

In stark contrast to Sosa’s convincing showing, Malachi had a rather lackluster performance overall. Formally the best on the East Coast, Malachi was considered the player most likely to test Sosa’s ability when brackets were first released. Once he made it into top 64, however, Malachi very quickly lost to Giovanny "ilovebagelz" Garcia and Devin “reslived” Gajewski, Luigi and Ness mains respectively. This performance isn’t completely out of character for Malachi, as he suffered a number of major upsets to players like Tyler "Fuzz" Graves, Kyle "Kycse" Carrero, Michael "techboy" Leleniewski and Robert "Bobby Frizz" Fraser in recent performances, but this was still a far cry from the PM legend’s previous heights and a major let down for fans of New York’s famed Sheik and Peach main.


Is ThundeRzReiGN Here Seriously or Not?

Returning from a brief hiatus, viewers and tournament organizers alike weren’t sure what to expect from the ThundeRzReiGN going into this tournament. While the former number one PM player should never be counted out, his insistence that he wasn’t taking the tournament too seriously was definitely cause for apprehension. During pools and early top 64, ThundeRz spent most of his time playing as characters like Ganon and Captain Falcon. While he is considered by many to be the best player of these characters, this did seem par for the course of someone who wasn’t too invested in placing well.

Everything about ThundeRz’s demeanor changed during his match versus Evan "Sothe" Cunningham. After losing the first two matches with his Captain Falcon, ThundeRz seemed frustrated and switched to his Donkey Kong and subsequently reverse 3-0’d the Ivysaur main in a very serious, dominant fashion. This dominance would continue up until winner’s finals, where he would lose to Sosa’s Wario in the previously mentioned game 5, last stock scenario. ThundeRz was back.


The King Returns in a Grand Finale

After losing winner’s finals, the question on everyone’s mind was whether or not ThundeRz would be able to take the tournament from the clutches of Sosa’s large, Wario-like hands. If the winner’s finals match was supposed to be Sosa’s statement on his number one placement, it wasn’t very convincing, and the run back was definitely imminent. While Brian "Blank" Sosa and other top 8 competitors showed potential in their performances, most of them were seemingly bumps in the road attempting to slow down the inevitable rematch between ThundeRz and Sosa. And lord what a match it was.

Grand finals was filled with back to back zero-to-deaths and neutral tense enough to cut with a knife. While the first set was a tight showing between two great players, the second set was a presentation about the perseverance of a champion. ThundeRzReiGN rounded out Even Bigger Balc by showing us why he was considered the best for so long, 3-0’ing Sosa and claiming the title of first as his own. If Sosa wants to escape the shadow of the former Project M champ, there’s still a bit of a ways to go.


Wrapping Up Even Bigger Balc and Looking Forward to the Future

I could very easily take this time to talk about this tournament’s other entrants and the remaining top 8 players, especially since there’s a lot of material to unpack, like Flipp’s return and other less prominent breakout performances by relatively unknown players. But instead, I think it’s important that we look to the future. The Even Bigger Balc marked a major milestone for the PM community, and it really showed a lot of doubters that the scene is very much still alive, still growing, and getting crazier by the minute. There’s a lot of hope to be garnered from this tournament series.

With that being said, Courtney "Zesty" Coffman, one of the leading organizers of the Even Bigger Balc, recently announced that next year’s Balc will be the last event in the series. This leads us to some very important questions: what are we doing to improve upon its legacy? How are we going to continue this community’s growth, and who is taking up the mantle and trying to continue organizing tournaments of this magnitude? Sure, it’s fun to talk about the players who dominate this game, but it’s equally important to promote the people who actually keep this great game alive.

Here’s the final list for top 8. I hope you guys enjoyed this event, and more importantly, I hope you will be willing to support similar events and tournament organizers in the future. Long live the king, and long live Project M.

Author’s Note: Shoutouts to Cala and Jfyst for repping Florida this weekend. I love all you Florida boys.
Last edited: Jul 10, 2018

God damn those reverse 3-0s by Thunderz were insane.

Such a HYPE tournament! Shout-outs to all the TOs for making EBB possible, the production value was great.

I hope to see more older PM players return to nationals like Flipp and Thunderz
Last edited: Jul 10, 2018
ThunderZ noted in his interview that he felt like Sosa was playing a bit off in the grand finals set, but this is nevertheless a crazy tournament for the mod. So many players that outplaced their seedings.
You must log in or register to reply here.
Share:
Facebook Twitter Reddit WhatsApp Email Link
Top Bottom