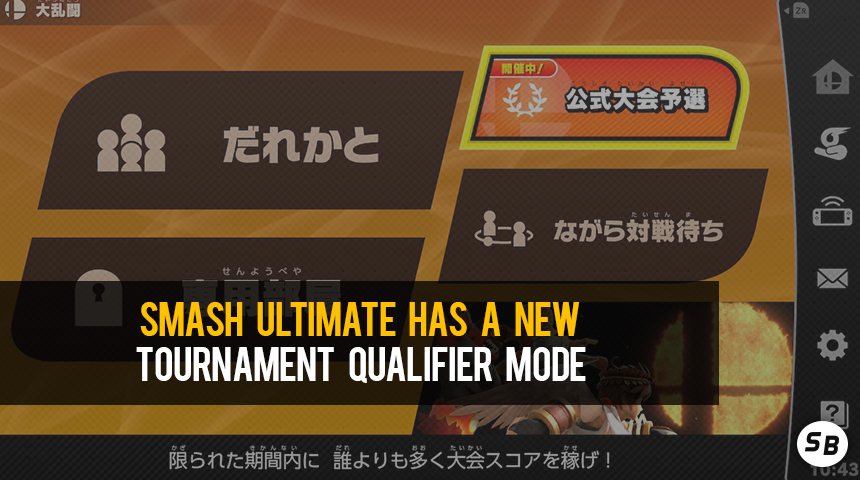 Interestingly enough, this mode was actually datamined and discovered before being officially announced. But what’s the mode about? It’s basically a ladder Smashers can sign up for and then compete against other Smashers on in 1v1 matches. The ruleset for it is pretty odd, it’s got all items on, smash meter is enabled, there’s 3 stocks, the stages are all random in battlefield form and the timer is set to 5 minutes. Any player who managed to score within the Top 8 will be invited to participate in a special tournament on February 24th in Tokyo, Japan.

Unfortunately though, the mode was only available in Japan. On top of that, time is up if you wanted to play. The period it was available for began on February 1st at 7 PM and ended at 9 PM Japan Standard Time. However, we can be pretty sure that this won’t be the last time we’ll be seeing this, given that Nintendo calls it the first online challenge. It’s very possible that there’ll be more of these in the future, and hopefully there’ll be some for every region.

Author’s Note: Personally, even if we got one in North America with a ruleset better suited to competitive play, I wouldn't be interested in playing because I absolutely hate Ultimate's online play and lag. However, I think it'd be a pretty great thing for everyone who likes online play. But what do you think? Would you be interested in playing this mode if it was available for you? Please let us know in the comments below!

That’s what that unused file was for

But I, a terry main, is scared of jigglypuffs cuz he’s so easy to gimp

But wait didn’t sakuria say there would be no more modes?

And I’m not super exited for the mode because the closest Nintendo has gotten to a good competitive rule set was with some items. People could argue that it’s more steered toward casual players, but a lot of people would think that a tournament, especially an OFFICIAL NINTENDO TOURNAMENT, lots of competitive players would be really disappointed
Last edited by a moderator: Feb 3, 2020
You must log in or register to reply here.
Share:
Facebook Twitter Reddit WhatsApp Email Link
Top Bottom