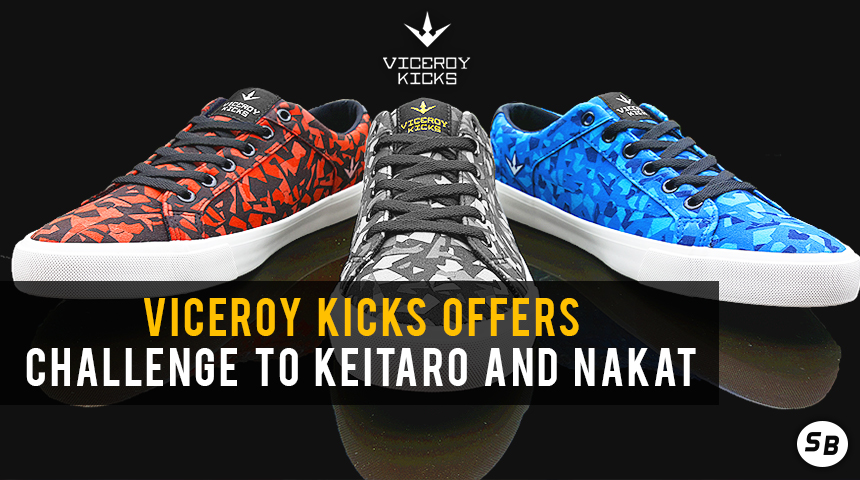 Title Graphic: @SB_K0KE​
Viceroy Kicks, a brand running a Kickstarter for gaming-centric shoes, brought on two prominent names within the Smash community, Richard “Keitaro” King, Jr. and Tyrell “Nakat” Coleman, to help promote their brand by completing a challenge to win a pair of Viceroy Kicks for themselves.

“Viceroy Kicks is an achievement brand for gamers,” said Ian Nelson, founder of Viceroy Kicks. “We unite gamers to stand up for the good that gaming has done in our lives. Our message is simple: Gamers should have pride in who they are.”

Their way of expressing that idea comes in a business model that is quite unique. They sell shoes that come with conditions that allow buyers to unlock different variations. While there will be models available for regular purchase, the exclusivity of other styles is dependant on the condition required to acquire them. For example, the Red Black Meta models are only available to those who demonstrate competitive drive. The typical way to unlock these is to achieve a minimum ranking within their game of choice, showing that they have passed a threshold into higher competition, E.g, Gold 1 in League of Legends. All models are available while the Kickstarter is open until August 10th.

Viceroy Kicks’ main source of outreach is to give challenges to influencers within the gaming sphere, and rewarding the victorious challengers with a pair of their shoes. “One thing that has always been fun, as part of gaming, is to do challenges,” says Ian. “We can aid content creators in their content creation process. That’s what we hope to do with these challenges that we’re doing. We’re doing something that’s definitely different.”

They extended that possibility to Keitaro and Nakat. Their challenge, which was mostly decided by the two Smash players, was to do an IRL stream on Twitch while in Mexico. The winning conditions were if they could acquire 5 phone numbers from local women. Upon completing the challenge, their reward would be a pair of Black Meta, Black Grey Gold Meta, or Blue Meta Viceroy Kicks. “It should be really fun. I’m really excited to see what they’re going to do with it.” said Ian.

Viceroy Kicks started their Kickstarter campaign on July 6th, but they’ve been active in the scene before that. They’ve contributed to several streamers and tournaments in Utah. Most notably, they challenged GrayKitsune, a local Utah streamer, to complete a Pokemon Ultra Sun randomized Nuzlocke run. On July 12th, he completed the challenge and was rewarded with a pair of the Black Grey Gold Meta Viceroy Kicks. They also rewarded a pair of the Red Black Meta models to the winners of Salt Lake Gaming Con’s brackets for Super Smash Bros. Melee, Super Smash Bros. for Wii U, and Dragonball FighterZ.

There was also a point where they attempted to hold a more traditional sponsorship with Cruz “OkayP.” Peterson. However, the team wasn’t ready to sustain that style of sponsorship while they were still attempting to get off the ground. Though, when asked about it, Ian was hopeful to attempt something similar in the future. “We would definitely love to sponsor individual players with Viceroy Kicks later, similar to how to Nike would sponsor a basketball player or a football player.”

Viceroy Kicks is certainly a newer player on the field of gaming-centric businesses, and they hold to a very interesting ideal. When asked about the company moving forward, Ian said, “It’s all about the message. We didn’t create this because we thought it would be cool or we would make money and stuff. We honestly want to poise the message that gaming is meaningful and something to be proud of, and we think gamers should be proud of who they are.”

The Kickstarter for Viceroy Kicks can be found here.


oh wait thats me
The spacies are known for their feet after all...