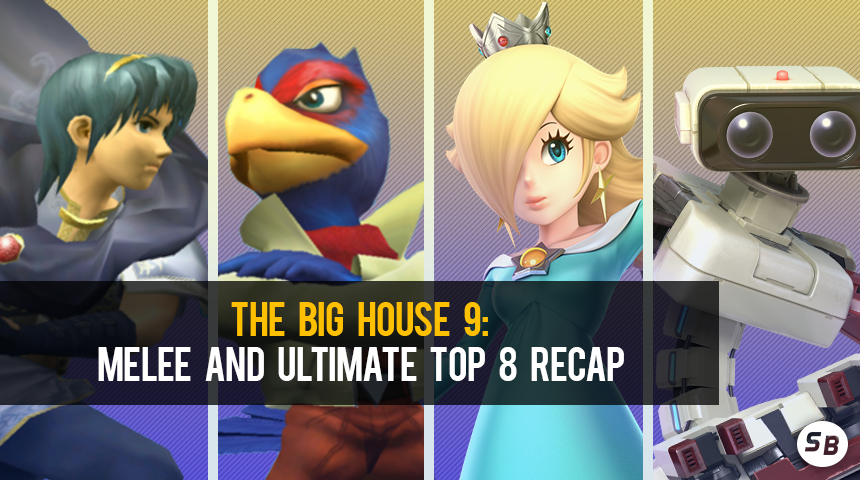 The Big House 9 boasted a massive 1,017 entrants in Super Smash Bros. Ultimate singles and 909 in Super Smash Bros. Melee singles. With so many players at the famous event, it showed us some of the best gameplay Ultimate and Melee have to offer. This time the all-stars who made it all the way to Top 8 were:
Melee Top 8 Recap:

Kicking off Loser’s round 1 we had iBDW squaring off against Fiction, who had pulled off a massive upset earlier against Justin “Wizzrobe” Hallet. This Fox ditto was neck-and-neck with Fiction barely taking the win 3-2. Next was Lucky, who also beat Wizzrobe earlier in bracket, up against… Hungrybox? Yeah, you read that right, Mew2King defeated Hungrybox in Winner’s before this, so you could say that Lucky vs Hungrybox was a battle of two different upsets. Regardless, Lucky managed to take a single game off Hungrybox but was ultimately bested by him 3-1.

Winner’s Semi-Finals immediately started off hot with Mew2King vs Zain. Game 3 was very close but Zain still ended up taking a clean 3-0 sweep. After that Leffen and Mango clashed, ending with Leffen nabbing a 3-0 win. Loser’s Quarter-Finals began with Fiction facing off against Mew2King. Fiction beat Mew2King 3-1 and advanced to fight the winner of the next match, Hungrybox vs Mango. Mango ended up being the winner and took it 3-1.

It was time for Winner’s Finals to begin, and Zain was up against Leffen. Zain notably kept all 4 of his stocks during Game 1 and ended up defeating Leffen 3-0. Mango then fought against Fiction in an extremely close set during Loser’s Semis, with Mango emerging as the victor 3-2. Afterwards Mango got his rematch against Leffen in Loser’s Finals, and this time Mango won 3-2.


Finally, Grand Finals arrived, and it was between Mango and Zain. The past three sets Zain and Mango had played against each other had all ended with Zain winning, so you might assume that Zain had this in the bag. That just wasn’t the case though, because Mango secured a bracket reset by winning the first set with a close 3-2 victory. Then, Mango did it again, he won the second set with another 3-2 victory to become The Big House 9’s Melee Champion!

Loser’s round 1 began with a showdown between Samsora and RFang, RFang’s Pichu put up a good fight but Samsora won 3-1. The next and final match of Loser’s round 1 was Tweek versus Shuton. Tweek ended up winning the set 3-2 and advancing onwards. The first match of Winner’s Semis featured Nairo clashing with Dabuz in which Dabuz barely outshined Nairo 3-2. Then Zackray went up against Maister, and surprisingly Zackray used Corrin instead of his usual characters for the first two games before switching to Joker on Game 3. Regardless, Maister won the set 3-0.

Next up was Nairo vs Samsora in Loser’s, and much like the previous set it featured a surprising character choice, this time being Nairo’s Donkey Kong during Game 1. Nairo’s Donkey Kong lost the only game it was in but he ultimately won and defeated Samsora 3-2. After that came another very close set, Zackray against Tweek where the former emerged as the victor and took the set 3-2. Then the Winner’s Finals set between Dabuz and Maister came along and further continued the trend of close sets with Dabuz beating Maister 3-2, which won Dabuz an invitation to Smash Ultimate Summit 2.

Loser’s Semis was between Nairo and Zackray, and was yet another really close set, this time ending with Zackray winning 3-2 over Nairo. Next was Loser’s Finals, where Zackray got his rematch against Maister and whoever won this would win an invitation to Smash Ultimate Summit 2. It started off similar to their last set, Zackray used Sonic, a character that he normally doesn’t use for the first two games, lost those games, and then swapped over to Joker for Game 3. This time though, Zackray’s Joker managed to win Game 3 and then win the rest of the set 3-2.


Grand Finals began with Zackray’s Wolf up against Dabuz’s Olimar. Interestingly enough this marked the third time we’ve seen the Wolf vs Olimar match-up during this top 8, the first two times being in the Tweek vs Shuton and Nairo vs Dabuz sets. Zackray’s Wolf proved to be too much for Dabuz’s Olimar to handle and secured a bracket reset with a 3-0 win. Dabuz and Zackray then swapped over to Rosalina and R.O.B. respectively for the next set. In the end Zackray prevailed over Dabuz 3-1 and became The Big House 9’s Ultimate champion!

Author's Note: Personally, I really enjoyed watching all the Top 8 sets from The Big House 9. Did you? Please let us know in the comments below!

I can't even remember the last time M2K was in a Melee tournament, but man I need to give some of these Top 8's a whirl.
we not gonna talk about "The Lost Stocks"
You must log in or register to reply here.
Share:
Facebook Twitter Reddit WhatsApp Email Link
Top Bottom