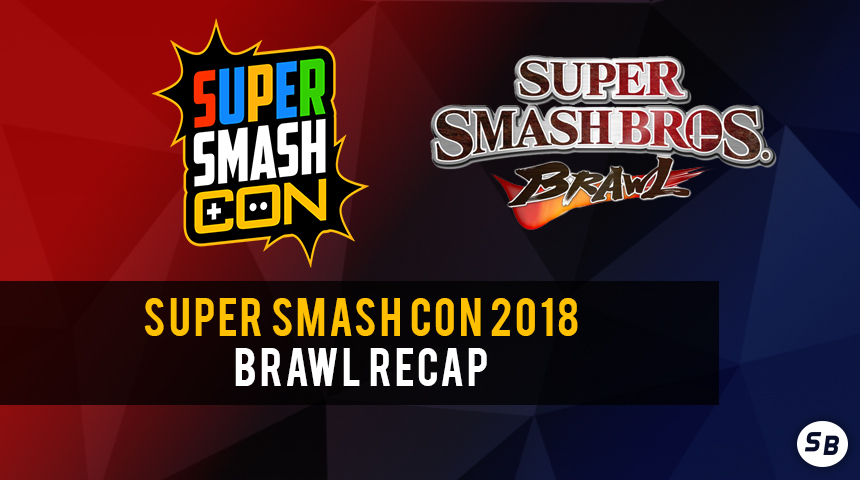 Another Super Smash Con is on the books.

When I predicted how the Super Smash Bros. Brawl tournament at SSC 2018 would go in my last article, I predicted that Nairoby “Nairo” Quezada would take it and that Cody “Cody” D. would go on a run, but I couldn’t have possibly guessed the rest of the bracket. It was set to be unusual given that Jason “Anti” Bates and Trevor “Atomsk” Hirschen, two top seeds, both dropped out of Brawl singles. The most unexpected result was Mike “Mikeray” Ray going out at 17th with successive losses to Peter “Poyo” M. and Brandon “Luigisama” Carbajal. To lose to even one of these players would have been a massive upset; for Mikeray to lose to both of them was ridiculous. Unfortunately, Mikeray vs. Poyo was not recorded, but Luigisama captured his match against Mikeray.

The unanticipated star of the tournament was Joshua “Pelca” Bedoya, a New England Falco main who stated on Twitter earlier this year that he was retiring from Brawl. I kept this in mind when I wrote the predictions article and didn’t say much about him, but Pelca made quite the run in the winners bracket. After taking down Tanner “Figy” Trzepacz 2-1 to make it out of pools, Pelca beat Hunter “Player-1” Rogers and Jestise “MVD” Negron to make it to top 8 winners’ side. After losing to Cody, Pelca beat Joseph “Seagull Joe” Rauscher and won the rematch against Player-1 in two consecutive game-five sets before Cody finally eliminated him. As the saying goes, it’s impossible to retire from Smash, but maybe a retirement is just what Pelca needed to stay on top. Pelca sent Player-1 home at 5th place, his third 5th place at SSC in a row. Maybe next year Player-1 will be able to break his 5th place curse.

This is the first year at SSC where top 8 was dominated by active Brawl players rather than Brawl retirees. Out of the top 8, the only player who doesn’t currently grind Brawl over other games is Nairo. Players like Joe “Toronto Joe” Cribari, Zeyan “Zan” Nizami, Kyle “Gunnermaniac” Runnels and the aforementioned Seagull Joe all made great showings and took out currently SSBBRanked players on their way to top 8. As the Brawl scene has diverged somewhat from the Smash 4 scene, we’ve seen players rise up to the challenge and work to optimize the game despite its relative inactivity.

In doubles, we saw Nairo and Anti take 1st place. While both players are Meta Knight mains, double Meta Knight is banned, so Anti played a mix of Wario and Snake. Brawl doubles top 4 was certainly very high level this year, but it’s hard to compete with two Brawl legends.

It’s also important to mention Smash Masters. The event was the first time in years that Larry “Larry Lurr” Holland has played Brawl, which many Falco fans looked forward to. In addition, we got to see Daniel “ChuDat” Rodriguez’s famous Kirby and Jason “Mew2King” Zimmerman’s oppressive Meta Knight. Both ChuDat and Mew2King did not enter Brawl this year, although Mew2King tweeted that he wish he had. Adam “Armada” Lindgren’s Sheik, which he used to get 17th at Genesis in 2009, as well as Daniel “Superboomfan” Hoyt’s sleeper Snake also made appearances.

Sets from the tournament can be found on The Brawl Community’s channel, VGBootcamp’s channel, and SSB64 League’s channel. Any Brawl from the event is worth watching for the novelty, but especially top 8 and Luigisama’s win over Mikeray.

Author’s Note: What did you think of Brawl at SSC this year? Share your thoughts in the comments!

Happens2u didn't realize you were a writer on the site! Good stuff.
A Falco main and a Wolf main getting 3rd and 4th, respectively, is pretty big overall.

I checked the bracket and saw surprising results. The biggest one is that:
A Luigi player called Luigisama got 13th at the tournament, despite his poor matchup against MK. The Elegant of Brawl?

The_Bookworm said:
A Falco main and a Wolf main getting 3rd and 4th, respectively, is pretty big overall.

I checked the bracket and saw surprising results. The biggest one is that:
A Luigi player called Luigisama got 13th at the tournament, despite his poor matchup against MK. The Elegant of Brawl?
Click to expand...

Luigisama is one of the most dedicated Brawl players on the scene right now and it's no surprise to see him do well. What's surprising is that he was able to beat Mikeray, who is one of the other people who really grinds the game.
You must log in or register to reply here.
Share:
Facebook Twitter Reddit WhatsApp Email Link
Top Bottom