Smash World Tour's Next Stop: A Look at Oceania 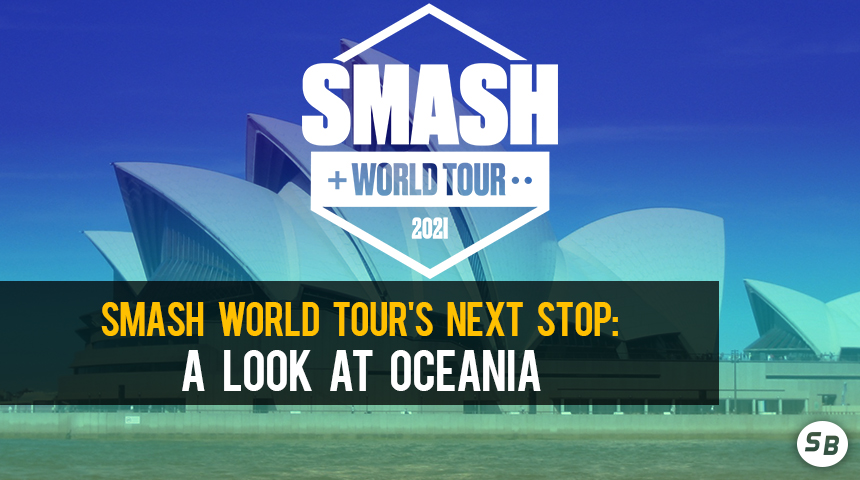 With the Smash World Tour in full swing, things have shifted from the Americas to Oceania for the next stop in Super Smash Bros. Ultimate’s current saga. Uniquely, Australia and New Zealand have been having offline events variably for a while, due to lesser impact from the COVID-19 Pandemic. However, this qualifier is online. In addition, this qualifier is for 16 players, making this the sole qualifying event for Oceania.

Australia, the primary region for Oceania, is a lesser-viewed scene that currently is among the faster growing talent pools. On the truncated OrionRank Pre-Quarantine, Jonathan “Jdizzle” Douglas and Bradley “DD” Kun placed 71st and 88th, respectively. This marked the first time in 6 years that an Australian player was ranked Top 100. Tinaye “Tin Man” Dune was the last Australian to be ranked, on SSBBRank 2014.

Notable performances like Ben Gold during his late 2019 visit to Southern California also stick out. At 2GG: Kongo Saga, he went to game 3 with Ezra “Samsora” Morris and later beat Takuto “Kameme” Uno at the post-major weekly event.

However, Australia suffers from a few problems. It’s heavily isolated, making expensive flights the most effective form of travel. The closest major event - the Umebura series - caps at about 750 yet fills up within 5 minutes of registration opening.

This makes the most attractive locations for reliable registration - Europe and North America - distant. Upon travel abroad, the stakes can be higher, the pressure is higher, and your practice against other top players will inevitably be limited.

As a result, Australia has slowly but progressively built up an impressively large internal scene with high-quality resources & data. Ausmash.com.au is one of the best region-specific resource websites in the world for Smash, and despite their isolation, Australia and New Zealand have a combined player base of nearly 10,000 players.

They’ve built something for themselves, and now they can ensure somebody goes to the most high-stakes event of the year - the Smash World Tour.

Australia has 8 regions, and New Zealand makes 9 - per Ausmash. Northern Territory is seldom worth discussing here, as it’s among the least populated active Smash regions worldwide.

Tomas “Luma” Parish is the best player and sole representative from Tasmania, though he currently resides in Perth. Despite originally being from one of the country’s smallest areas, he has defeated a large number of Australia’s top brass, notably taking a game off of top Bowser David “LeoN” at Oasis and placing 5th at Australian national CouchWarriors Crossup 2, defeating Ben Gold and DD along the way. He mains Palutena.

He is set to fight Victorian R.O.B. main Sebastian “SebPro101” Poli-Tabone in Winners Bracket, making it one of the must-watch sets of the tournament with significant stakes. The winner is automatically going to the Offline Finals later in June, but the loser will have to climb just a bit further.

Working up, the small but strong Australian Capital Territory (ACT) has two players in its top 32, “Kinaji” and “Maplemage”. Kinaji, newly ranked 3rd in region, is a Snake main that will be fighting against Peach player “Xav” in Top 32.

Maplemage, ACT’s second best player, is a Corrin and Zero Suit Samus main set to fight through the losers bracket. He was sent to losers by Victorian R.O.B. “Radio” in one of many notable pools upsets, but the qualification number for the Oceania event makes climbing back less difficult than it was at last week’s Mexican Qualifier.

Distant from the eastern metro areas, Western Australia still retains a respectable scene. While many of its top players are absent, longtime Perth #1 Jordan “Poppt1” Ridley attended and made Top 32. Formerly a Ness main, Poppt1 is now piloting an efficient Lucina that needs to defeat New Zealand’s #2 - Dark Pit main “Ichigo” in order to make finals.

Additionally, unranked Pikachu main “Fryd Ryce” made top 32, and is set to fight against #1 seed Jdizzle. An upset here is unlikely, but it would be a big deal and demonstrate Western Australia retains some depth that contend with the top players in-country.

Of all the regions today, New Zealand - an island nation - has the most to gain. While we occasionally see national crossover, New Zealand has outright put three players on the map for the Top 32 of its Oceanic qualifier.

Previously mentioned, Ichigo - fighting Poppt1 - had to defeat Joshua “Ghost” Francis, a top South Australian Mii Brawler, in order to get in his winner’s position. One more win would ensure New Zealand’s place in an in-person final.

“IcyK”, the country’s best Bowser main, is fighting from the loser's bracket. His first opponent will be “P9”, Australia’s best Villager player.

Lastly, we have Liam “Aluf”, New Zealand’s best player and Oceania’s best Mario. He is set to fight against Nick “Extra” McKenzie, the country’s 2nd best player and the best Mr. Game & Watch player on that side of the world.

Various players from the state of South Australia skipped out this event, but not Ghost - the country’s best Mii Brawler. Despite an early loss, he escaped pools and will be facing off against Isabelle player “Digby Main” in losers round 1.

Additionally, “Q” and “Googlemaps” - 4th and 5th on the South Australian Power Rankings - made top 32 losers side. Q mains several characters, but has opted for Samus, while Googlemaps is one of the country’s top Toon Link players. Both will be fighting against New South Wales players “Kanga” - a Snake main, and “Shaoweater”, a Wolf main.

While the state’s two best players attended, Andrew “Shadrew” Isokangas drowned in pools as one of many early upsets. This left Ben Gold, arguably the best King K. Rool in the world (though he has used Wolf so far at this event) as the sole ranked representative of the state. He sits in the winner's bracket, ready to face off against Victorian Ness main “Khami” for a chance at the Top 16 Offline Regional Final.

Elsewhere, the remaining Queensland players will variably be contending in losers. This includes the aforementioned Digby Main, but includes top Wii Fit main “Dags” and South African Luigi main “Juice Goose”, who is staying in Australia, and also has the current distinction of best African result worldwide at a Smash event.

New South Wales (NSW), which houses the powerful Sydney scene, had a general lack of presence at this event. While five players ultimately made it to the top cut, none are currently ranked in NSW. Despite this, Dark Samus main “chizzL” made a significant upset over DD to escape loser’s bracket.

While two players from NSW were mentioned in tandem with South Australia, the final two NSW players are “Andrew Lin” and “Coleman”, an Inkling & Wario main respectively, who will be facing off against each other in round 1 of loser’s top 32.

Many of Victoria’s players thus far have been noted as a result of bringing up the matches set to occur in top 32. Extra, DD, and Jdizzle - Australia’s top 3 - all hail from here, and two made the Top 32 cut. Melbourne’s powerful scene has enabled the region to get 12 players into the top 32, a far more lopsided number for a region compared to Mexico’s mixed bag from last week.

The favorites to make it to finals are Jdizzle and Extra, but Extra faces a solid challenge from New Zealand’s #1, and Ben Gold could potentially upset Jdizzle in Winner’s Quarters. Nonetheless, the latter isn’t a big deal since both players will have qualified by that point. Still - it should be a set worth watching.

I’ve yet to mention “Danklin”, an unexpected presence in Top 32 winner’s side. He benefitted from Shadrew’s early bracket loss, but is one of the few active Mii Swordfighter mains, and the most successful one in quite some time. He’d have to beat “Dura”, a previously ranked Roy main from Victoria.

In an interesting turn of events, “RaZe” - the country’s top Pit - makes for two Pit players in Top 32 winners side. As a result of the abundance of Victorian players, he’ll be fighting the aforementioned R.O.B. main Radio for a spot in the offline final.

As mentioned before, top Victorian R.O.B. SebPro101 will be facing off against Tasmania in a critical set that is near the top of the “must watch” list for the event.

Lastly, Mega Man main “Daikou” will be competing against JuiceGoose, and Roy main “MAST” will be fighting against Mapemage.

The Top 32 of this event proved to be unexpected. Early pool losses such as DD and Shadrew can make it back through the Last Chance Qualifier, but that is undoubtedly a difficult task even four making it. Australia’s skill is spread throughout the continent, making a prospective top 6 LCQ very difficult.

This seems to be something of a reflection of Ultimate’s online, as these players - widely successful offline - had to switch to an online format despite Australia running offline events for quite a while. This was due to the lesser effects of the COVID-19 Pandemic in parts of the Asia-Pacific region.

Despite a messy pools section, the remaining sets have potential to be exciting, with a lot on the line for smaller regions within Oceania and a very high-stakes LCQ that could revive the efforts of some of Australia's top players.

The endgame: The offline Oceania regional finals, managed by stellar in-region group CouchWarriors. This will take place from June 25th to June 27th, making it the first of the offline finals.

Where to Watch & Resources

only names I recognize from this assortment is Poppt1 and Kanga

I'm subbed to Poppt1's Youtube channel for his "The Mind of..." videos he did awhile back, though his win or Dare series he sometimes does with Little Z is charming at least.

I've heard Kanga's name mentioned once or twice in discussions among friends after majors. dunno much beyond hearing their name, though...

I wonder if there's any notable major events in that region to watch for... perhaps see what kind of playstyles these contenders have to offer.
You must log in or register to reply here.
Share:
Facebook Twitter Reddit WhatsApp Email Link
Top Bottom