Pre-release: How Ultimate Compares to Brawl 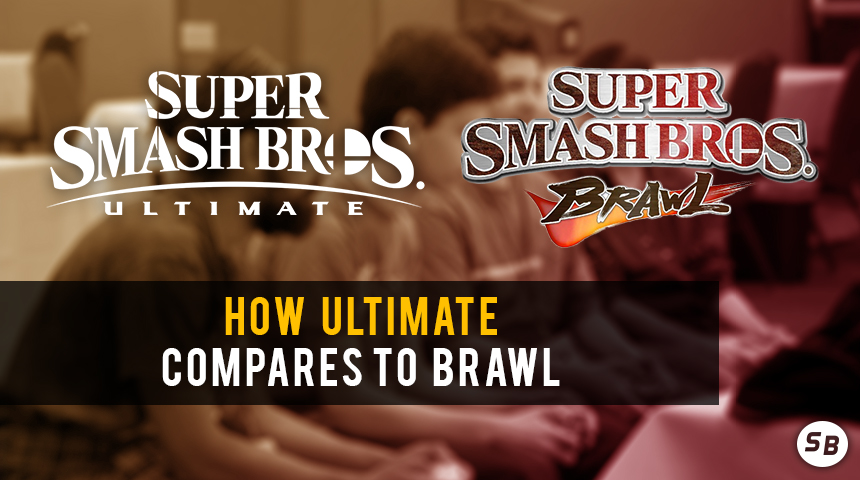 With every new Smash game, rumors abound, some from reputable sources and some not. Smash fans are quick to have debates over pre-release footage of each new game and what it could mean for its competitive potential. While today places like YouTube, Reddit, and Twitter blow up with all sorts of gameplay footage, this wasn’t the case in 2007-8 leading up to Super Smash Bros. Brawl’s release.

Google Super Smash Bros. Ultimate gameplay, and you’ll find that, in addition to videos from Nintendo’s own invitational, many top players already have recorded matches from the Smash Ultimate demos. In the pre-Brawl era, such videos were much harder to come by. One of the few players with early access to Brawl was Tony “Gimpyfish” Dennis, who was one of the premier Bowser mains in Super Smash Bros. Melee. He had a series called “Brawl Talk” in which he answered questions about the new game. Apparently, this version differed somewhat from the final iteration (1). Among the highlights are that L-cancelling still existed but was performed by simply doing an aerial after a fastfall, that dash dancing was more effective than in Melee, that crouch cancelling was performed identically to Melee, and that wavelanding was still in the game. People couldn’t wait to get their hands onto Japanese Brawl when it came out, to see if what Gimpyfish said was true.

Brawl’s Japanese release still didn’t answer many questions for most Westerners. The game was obviously very different from Melee, but to what degree? What kind of tech was in the game? DACUS was discovered almost immediately and later became a defining part of Snake’s metagame (2). People soon discovered DeDeDe’s chaingrab but were unsure if it was escapable or not (3). We would later find out that DeDeDe’s down throw has set knockback, so it’s inescapable. Three stocks became the competitive standard almost immediately, since people noticed how much longer stocks lasted in Brawl (4). The longer stock length is due to a variety of reasons, such as momentum cancelling, the input buffer and new airdodge making it harder to SD, and the general buff of recoveries across the board. Lots of new techniques were being discovered, and it was a race to find new, impactful techniques that would shape the metagame (5).

The fundamental mechanics of the game were initially a mystery much as with most fighting games. This is a crucial difference in Brawl’s release compared to Smash Ultimate’s. For Smash Ultimate, representatives of Nintendo explained some of the new changes to the game on stream, whereas in 2007 Twitch didn’t even exist. One of the first things people noticed about Brawl was tripping, but nobody knew what caused it. Some said it was random, while others argued it was not (6). We now know that it is a 1% chance for every dash and a 1.25% chance for every run turnaround (7).

There were also rumors of a DLC channel, or a way that Brawl might be updated later (8, 9). In 2008, Xbox Live was routinely releasing patches for games, although Nintendo was a bit behind on this front. While Brawl was the first Smash game to have online play, it wasn’t the best system. Online matches frequently devolved into taunt parties in Basic Brawl, but the emergence of Allisbrawl’s ladder (comparable to Anther’s today) allowed for online games with friend code sharing.

Like with any Smash game, old or new, everyone had their thoughts on the tier list. From the little video footage of the game, it was speculated that Fox, Falco, Wolf, Zero Suit Samus, and Meta Knight would be among the best, given their fast speeds and great combo abilities. Yoshi and Olimar were predicted to be among the bottom characters, due to the removal of double jump cancelling and Olimar’s extremely poor recovery (10). Olimar’s recovery remained a weakness throughout Brawl, but nobody in 2008 could have predicted his insane camping ability. Once the game came out, it was much more clear who the best characters were. Ankoku kept a statistical tier list going based on tournament results and which characters were used, which put Snake as #1 and Meta Knight as #2 (11). This tier list was updated through 2010 (12).

And of course, much like today there was some deliberate trolling. One of the best parts of browsing old forum threads is seeing the trolling and flame wars, and there were no shortage during the beginning of Brawl. Brawl felt much slower than Melee, so one helpful Smashboards user decided to help prepare people who didn’t import Japanese Brawl, by playing Melee at half speed (13). Another user decided upon a clever way to get people to open his thread by announcing that Brawl was delayed until April 6th. Samurai Panda had none of this and quickly locked the thread (14).

The numerous demos and recorded matches of Ultimate are game-changers in terms of how much we know about its mechanics. The fact that CEO had an official Nintendo demo says something about how far competitive Smash has come since 2008. The invitational showed off many mechanics intended to balance the game around competitive play, such as aerials doing less damage from a short hop (15) and the damage multiplier being different in 1v1 matches than in 2v2 (16). Some players are already predicting that Ridley is top tier and that Fox is low tier (17). Whenever you see new Smash Ultimate news or gameplay, step back for a minute and think about how crazy it is that we can know so many things about a game that isn’t even out yet.

Author’s Note: If you’ve been around for a Smash game pre-release, what did you think? Or if you played Brawl early (you dinosaur), did I get it bang on? Let us know in the comments.
Last edited: Jul 31, 2018

I remember seeing the Pokémon Trainer’s reveal (in Brawl) from a hotel computer in Surin, Thailand and squeeing
HECK Yeah. It's honestly so interesting to see, especially because both Brawl and Smash Ult's hype cycle feel so similar.
I can’t talk about technical stuff, but aesthetically Ultimate does remind slightly of Brawl with its more subtle color palette compared to Smash 4’s more vivid look.
Seeing old threads about "Ink Dropping", a supposed tech that forced a trip in order to abuse the invincibility on wakeup (????) really shows how far we've come.
Wow, I had no idea about a lot of this stuff, I never would have guessed that in early versions of Brawl there'd be a alternative to L-canceling (or perhaps he was auto-canceling and not realizing it somehow? Eh, probably not.) or that Wavelanding was in it at one point. Also, that statistical tier list is crazy, I get why it's that way but it's crazy to think that there was actually a time and place where Meta Knight wasn't perceived as this clear-cut number 1 character and that Yoshi was seen as worse than Zelda, Jigglypuff and Ganondorf, it's really interesting stuff.
Nice article, I like all the sources.
Predicting ridley will be top tier? I'd be reaaally suprised. I'm really excited for him, and i think he'll be good, but high tier at very best.
Yeah, I think Ridley is going to be at best low high. Top tier is a stretch when you have a nerfed witch showcasing how much of a combo food character he is.
It’s incredible how different things are from a decade ago. Brawl’s online was almost an afterthought compared to now and back before Brawl’s release, all I saw for videos were a few trailers. Compare that to Ultimate where we know most of the game already.
You must log in or register to reply here.
Share:
Facebook Twitter Reddit WhatsApp Email Link
Top Bottom