Is 1-Stock Smash the Future? 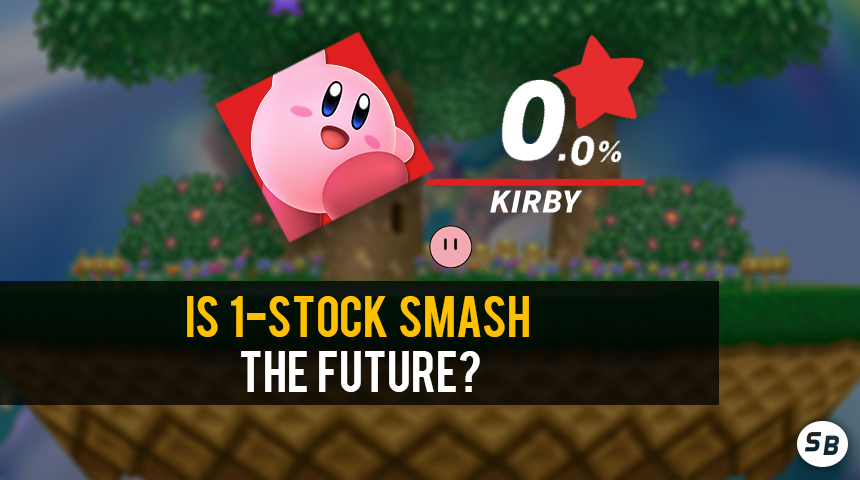 Death, taxes, Super Smash Bros. ruleset overhauls: the constants of life. While there is often talk of making sweeping changes to the rules of a Smash game, relatively few see use in tournament play, much less widespread adoption. Examples of “successful” ruleset changes in Melee recently include wobbling bans and ledgegrab limits. Both have seen regional adoption, which is better than a 6 minute timer or frozen Pokémon Stadium, for example, have ever done.

These examples of ruleset changes aren’t all that impactful to the average player, though. They don’t fundamentally change the way Melee is played, which hasn’t changed since the MLG era. Players strike to a single stage from a defined set of “neutral” or “starter” stages, after which the losing player can choose the next stage, with the winner sometimes being allowed to ban a stage. Players have 4 stocks and 8 minutes per game, and a set is either best of 3 games and best of 5 games. This paradigm can broadly be described as Melee’s format. A wobbling ban or ledgegrab limit doesn’t by itself change Melee’s format.

It’s hard to imagine a total paradigm shift, but that hasn’t stopped players from looking for new ways to play Melee. Recently, a tweet by Sami “Druggedfox” Muhanna made the rounds on Twitter with a radical redesign of Melee’s format.

I'm grinding 1 stock 1 minute melee on yoshis, bo9 and it feels amazing. Solves everything I dislike about the game, is insanely hype, better player wins consistently, and it buffs low tiers a LOT. In case of time out, 40 second airtime auto loses.

While this might sound insane, it’s not coming from a nobody. Druggedfox has been ranked as high as 12th in 2017 with wins over Mango, Leffen, and Axe over his career. He’s well known for his theoretical understanding of Melee and ability to play many characters at a high level, in addition to being a popular coach. He coaches players such as Avery “Ginger” Wilson, James “Swedish Delight” Liu, Kalindi “KJH” Henderson, Zaid “Spark” Ali, Kyle “Kalamazhu” Zhu, and many more. Let’s break it down.

What Druggedfox is proposing is for a best of 9 set, one stock per game, with a 1 minute timer, all games played on Yoshi’s Story. In case of a timeout, going over 40 seconds of airtime is an automatic game loss. This format removes other stages which have elements that promote defensive play or have random elements. Yoshi’s is arguably the “most balanced” stage. It is the smallest stage and its platforms aren’t high enough to prevent any character from approaching safely. Battlefield has a high top platform that some characters have trouble reaching, and Dreamland is huge. Fountain of Dreams has random side platforms and Pokémon has transformations. Final Destination has no platforms.

Why 1 stock? According to Druggedfox, the interactions that occur with a stock disparity necessitate one stock games. Currently, attempting to level a stock lead requires the losing player to make risky approaches, while the timer incentivizes waiting given how long a player has to make something happen. In addition, players have to play defensively at the beginning of a stock because their opponent will come back with invincibility. The one minute timer ensures that interaction will happen in a timely fashion.

Believe it or not, this isn’t a wholly original idea. Remember one stock Brawl? Probably not, and there’s a reason for that. Despite being a popular format and even used at larger tournaments like GOML 2014, it never saw widespread adoption. At major Brawl tournaments today, the 3 stock 8 minute ruleset is used because top players didn’t like one stock.

Read what top players thought in this thread from 2014

Of course, Brawl is not Melee, but it always seems that today’s problems in Melee were yesterday’s problems in Brawl. Banning infinites, changing the timer, ledge grab limits, and now 1 stock. Perhaps Melee’s format has some learning to do from Brawl’s history.

In his 1962 book “The Structure of Scientific Revolutions,” Thomas Kuhn broke up scientific development into two periods: normal science, followed by a paradigm shift which throws out all previous knowledge except what fits the new paradigm. It has been a long time since Melee has seen such a paradigm shift in its ruleset, and it’s not exactly clear what that would look like. Perhaps with the growth of the community since 2013, a paradigm shift to bring Melee in line with modern tastes could be in order.

I, uh, legit never thought about 1 stocks. That can be helpful in SmUsh to prevent free kills from Wario or rage boosted quicker kills.
Ok, that's an idea, but how about 5 minute time battles instead?
I'm actually relieved that 3 stock has returned from Brawl for Ultimate. Both Smash 4 and Ultimate have a far bigger percentage of their casts than 64/Melee/Brawl of characters who can kill on stage under 40%. Smash 4 matches were too heavily defined on such "hype" early kills rather than high-level execution, and Ultimate applies higher damage output for all moves in 1-on-1s than other modes or past games. A theoretical 1-stock for Ultimate would catapult Hero even further into the realm of "cheap" because getting hit by whack means the match is over. No chance to come back with actual skill. Just a match won by whack.

Hell, 64 is still 5 stock and there are no complaints coming from its playerbase.

(edit: I didn't catch that the post was mostly about Melee. But even then, I still think 1-stock could be extremely frustrating for any fox/falco that lets Hungrybox UpThrow>Rest them on Battlefield)
Last edited: Jan 15, 2020
One Stock against high level Jiggies with spacing mastery and SAS setups would be murder.
My personal opinion on one stock matches in Melee is that it wouldn’t work as good as having the normal tourney ruleset of 4 stocks and 8 minutes. The reason behind why it wouldn’t work is that there wouldn’t be enough playing matter for a player to adapt to their opponent with just one stock. Being put in an aspect of having a ruleset of one stock and limited time places too much restrain on a player, and can prevent them from getting the necessary time to adapt to their opponents, and grow as a player. Sure, it can help people overcome tight endgame situations where each player has one stock with little time left, but it is better to play longer to improve as a player. Not to forget that playing in tournaments is stressful enough with the atmosphere and the crowd watching, where players will have to deal with as well, especially if they are new to the scene.

With one stock, a match won’t give enough information on mistakes that a player makes to allow them to learn and overcome from them. I don’t really think it’s fair to lose a match just because of one wrong input before the match ends, on a ruleset of one singular stock. You should be able to have the chance to try again, and learn from your previous mistakes to improve as a player on your next following stock. Singular one stock matches won’t be enough to help.
Last edited: Jan 15, 2020
GASP! Uh, how DARE you post the Ultimate percent gauge and not have this be related to Ult?!

This is a very Intredasting (C) way to go about the future of Melee and Brawl...

Happens2u said:
At major Brawl tournaments today, the 3 stock 8 minute ruleset is used because top players didn’t like one stock.
Click to expand...

Why?
I feel like playing on just Yoshi's would make playing v. Marth really frustrating. Maybe loser picks one out of Yoshi's, Battlefield, and Dreamland (so we get variety in the stage size), then you can't pick that stage again until every stage is picked (so if it goes to game 9, you would have played on each of the stages thrice)? I also feel like one-stock games would allow more game wins based off of a fluke, which would be the only reason I'd imagine it'd make low-tiers better. I also feel like it'd break up momentum a little too much.

With that said, I wouldn't be opposed to people trying it out as a side bracket and then switching over if they like it more. I just don't think it'd change the standard after we give it some playtesting.
You must log in or register to reply here.
Share:
Facebook Twitter Reddit WhatsApp Email Link
Top Bottom