Get On My Level 2019 was a hype event, an explosive kick-start to 2019’s summer of Smash. The tournament was the setting for several astonishing upsets by Michael “Riddles” Kim (over Jason “ANTi” Bates and Demise’s fresh sponsee Eric “Mr. E” Weber), Bryan “BryanZ” Medina and James “Shoyo James” Wade; prominent placings by relatively uncommon characters; and insane, lengthy losers’ runs by players including Eric “ESAM” Lew, Alan “Gen” Soriano and Robert “Myran” Herrin. GOML 2019 was also notably Canada’s largest Smash tournament ever, a promising first window into the epic stories remaining to unfold in these next months.

Sunday morning, as Super Smash Bros. Ultimate’s fans and players were gearing up for Top 16, the matches ahead might have prolonged mild controversies about Snake and Olimar’s impending dominance of the meta, with two players for each character poised to occupy half of Top 8. Elliot “Ally” Carroza-Oyarce was knocked out 3-0 by TSM’s Gavin “Tweek” Dempsey and then eliminated by Panda Global’s ESAM to take 9th. Jestise “MVD” Negron was thwarted by fellow Panda Global rep Brian “Cosmos” Kalu, Olimar-main Samuel “Dabuz” Buzby eliminated by Ezra “Samsora” Morris then Cosmos, and Myran was taken out at 9th by Shoyo James in a considerable upset. James “VoiD” Makekau-Tyson beat Landon “Captain L” Trybuch but then lost in a close set to Leonardo “MKLeo” Lopez Perez, marking another tournament where Pichu was outplaced by her commonly perceived-to-be-inferior if infinitely iconic evolution.

Winner’s Semis saw Nairo launch into a 0-death of Marss’ Zero Suit Samus but nevertheless flail as soon as Marss adjusted in the next games, as Marss even achieved a 0-death of his own. Marss was ultimately able to take Games 4 and 5 with his signature mixed-up, unpredictable flurry-of-options style, cementing himself in Winner’s Finals. On the other side of Semis, Tweek dominated Samsora 3-0, promising viewers and audiences a certain-to-be fire culmination of the Winner’s Bracket. Finding themselves suddenly in Loser’s, Nairo found himself flattened 3-0 by ESAM’s famously busted Pikachu, and meanwhile Samsora was straightforwardly outgunned 3-1 by MKLeo’s new Joker. Those victors now forced to fight each other, ESAM dominated Game 1 only to be in return overwhelmed by MKLeo in Game 2, including a crazy read shieldbreaker by Leo’s Lucina. As the Loser’s Semis culminated in a ferocious Game 5 scenario, ESAM able to clean up with an unrelenting aerial onslaught, propelling him into Loser’s Finals.

Meanwhile Marss awaited the brave Pika after a titanic Winner’s Finals against Tweek culminating in Tweek’s victory after being down 0-2 and fatefully switching to Roy to bombastic applause, and for all Marss’ keeping each match perilously close with Booster Kicks and Flip Jump gimps, now Loser’s Finals ignited with Marss switching to his memorable Ike against ESAM. Ike’s heft proved an invaluable resource, as the Ragnell-wielding swordsman refused to die after being sent flying across the screen countless times throughout the set. Two repeat usmash kills in Game 2 from Marss put the set solidly 2-0 in his favor, and going into Game 3, viewers could note that ESAM appeared visibly flustered. With measured adjustments and honed mentality, however, ESAM successfully carried the set to Game 5, where ESAM nearly 0-to-deathed Marss from the beginning if not for a minutely misspaced fsmash that nearly interrupted Ike’s Aether. In the end Marss managed to catch ESAM getting off the ledge with a ftilt to seal the set and advance to Grands, where Tweek remained imperiously undefeated.

Grand Finals rocketed from the very start with Marss attempting a flurry of attacks to carry the pair over to the right off-stage, Tweek making it back and pressuring Marss on the ledge, and Marss taking the first lead with a succession of Plasma Whips to send Tweek’s Roy falling into the bottom blast-zone. In Game 2, Marss tried to compensate for Tweek’s subtly growing lead by going in deep for an off-stage kill, inadvertently SDing for it and allowing Tweek to eventually win. In Game 3, though Marss very nearly gimped Tweek with a well-placed mid-air stun-gun shot below the ledge, Tweek clutched out a victory with continual usage of perfectly positioned jabs and bair to wall out Marss’ repeated attempts to return to stage, and he was able to carry his gaining momentum into and through the final game of the set, netting a hard fought 1st placing in Get on My Level 2019, an achievement attained having never dropped a set the whole tournament, incidentally reestablishing himself as a very tip-top threat in the meta, perhaps even resurging back into the dialogue for who is the number one player in Smash Bros. Ultimate.

With MomoCon now nearly arrived, we can look forward to the developments of all these otherworldly players and for what awaits Smash Bros. Ultimate and Melee this summer!
Author’s Note: What do you think? Let us know in the comments below!
Last edited: May 25, 2019 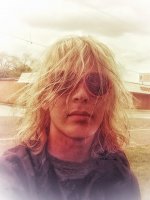 Tanner "uhmuzing" Davenport
Contributor
uhmuzing is an avid Marth and G&W main since Brawl’s debut. His myriad creative passions lie ultimately in writing poetry, fiction and music. He has produced an unpolished garage-rock EP and published a collection of poems, and in 2019 has taken up abstract painting and is working on his beatnik-style first novel.

Samora lol
11 different characters in top 8. Not a single repeat. Great to see.
Last edited: May 25, 2019
This tournament was amazing. My favorite tournament in Ultimate so far. Esam’s losers run was insane!
You must log in or register to reply here.
Share:
Facebook Twitter Reddit WhatsApp Email Link
Top Bottom