​
Happy New Years to all Smashers worldwide! 2015 was definitely a historic year for Super Smash Bros Melee. We saw some of the best SSBM ever as the game experienced one of it's craziest years thus far and now it's time to revisit all the hype! EMG is highlighting the Top 30 SSBM plays of the past year in a 3 part series today starting with plays 30-21. The video includes 4 Falcon punches and two 2v1 comebacks, just to list a few!

Take the opportunity to let us know in the comments after watching part 1 what you think will be next and what your favorite moments of 2015 were!


If you have any submissions for future EMG videos, you can also send us clips using this form and let us know what you want to see next!
---------​
To support the team, you can check out Even Matchup Gaming's YouTube channel for more hype Smash Bros content and follow us on Facebook, Twitter and Twitch. 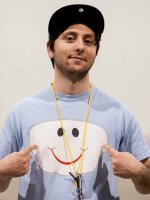 EMG Toronto Joe
Smash Bros. Enthusiast
Toronto Joe is a competitive smasher, content creator, and event organizer who actively works in the Smash scene. When not creating highlight reels for Even Matchup Gaming (including the Smash Bros Play Of The Week series) he can be found at tournaments across North America or eating poutine.

that Hbox 4 stock though. O_O
That misfire from Luigi that Abate pulls off never gets old.

And the head bang, can't forget that.
Last edited: Jan 2, 2016
The falcon punch four stocks in a row looks like it HURT!

Great video, can't wait to see part two.
That was sick, looking forward to part 2!
One word, incredible.
hope to see all the parts instead of like *cough* vgbc top 100 xanadu moments *cough*
Last edited: Jan 1, 2016
I think that the Armada meditiation four-stock on Leffen from B.E.A.S.T 5 should be featured
When m2k dunked armada with Mr Saturn was awesome. Can't wait for part 2
Always feels so satisfying to see and hear a good rest on someone...
21 was the manliest 4-stock of the year. 4 Falcon Punches? Dang.
Guys you have to include this sick scar jump shine back air by Ice https://www.youtube.com/watch?v=PKkvzk_HjzY at 20:49
You must log in or register to reply here.
Share:
Facebook Twitter Reddit WhatsApp Email Link
Top Bottom