Menu
Log in
Register
It appears that you are using ad block :'(
Hey, we get it. However this website is run by and for the community... and it needs ads in order to keep running.
Please disable your adblock on Smashboards, or go premium to hide all advertisements and this notice.
Alternatively, this ad may have just failed to load. Woops!
Resource icon

How to Fight Pac-Man

So you keep fighting Pac-Man and keep losing? He's too good right? Wrong. You just don't know how to fight him. This guide will be a general guide on what to do and what not to do against certain things Pac-Man does. Here's a list:

Pac-Man's Neutral? Ugh. It's terrible right? You can get in. Hydrants and trampolines everywhere. And to make things worse, Pac-Man is always smiling at you like he knows you can't do nothing about it.

Well the bad news is, Pac-Man usually doesn't need to approach so you need to get through that. The neutral can navigated though in a variety of ways and it is partially dependent on what character you are. But as a general rule, ignore the hydrant, don't jump on the trampoline, negate the fruit. You'll be fine. Also important note. Don't leave Pac-Man alone. Pac-Man is that weird kid that plays by himself on the playground and gives everyone the creeps. Then he brings an unsuspecting kid over and then it's too late. So never let Pac-Man set up.

Now let's get into the specifics. 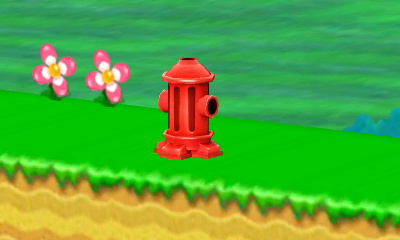 Behold Pac-Man's Hydrant. It's so red, so majestic, so UPSMASH-ABLE! It must be upsmashed! Well hold on there Slugger. I know it looks so tantalizingly upsmash-able but first we must check to see if it should be upsmashed.

First, if you are any of these characters do NOT run up to a full health hydrant and upsmash it:

Man that list was actually a lot longer than I thought. So why do you all keep doing it? OK next is a list of people that should always upsmash the hydrant

No one
Why? Because it makes you predictable. If you always upsmashed the hydrant, then Pac-Man knows what you are going to do. This isn't good. He can punish it. So read the situation. If Pac-Man isn't anywhere near the hydrant, why are you upsmashing it? If Pac-Man keeps punishing your hydrant launching attempts, why do you keep trying upsmash? Stop it with the upsmash. The exception to this is if Pac-Man is near the ledge with the hydrant in front, then he is probably avoiding a grab from certain characters. Up smashing the hydrant here is usually fine, if the upsmash isn't laggy.

Want to know what to do if the hydrant is on the field. Ignore it. By launching it, you give Pac-Man the opportunity to use it again. By leaving it there, he can't use it. Be careful though as Pac-Man can use the hydrant to his advantage.

Also when using the hydrant water for your own gain, remember that it does it twice. Also any non-projectile hitbox and shield negates all damage to you from a launched hydrant. 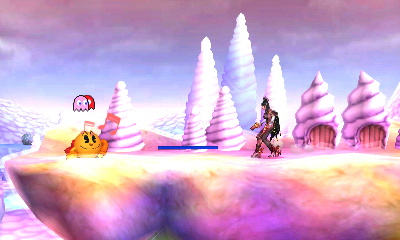 Look at him. He's just siting there, mocking you. Let's get him! Hold on there, Champ. Have you thought about what would happen if you did that? If you land on that trampoline, you go into the air. So what do you? Do you jump? That will put you in the same spot. Well you can throw projectiles. But what's that you say, you're Captain Falcon? Hmm. Well waiting him out is a valid option. You can also mixup your approach. Airdodging prevents Pac-Man from hitting you in the air. Using an aerial attack can trade or beat Pac-Man's aerials since they are short-ranged. Some Characters, like Little Mac, have moves that go over or under the trampoline and it's like it isn't even there. Other Characters like Jigglypuff are usually in the air anyway and aren't really affected by it. Just keep in mind when attempting to cross a trampoline that Pac-Man knows where you will be. 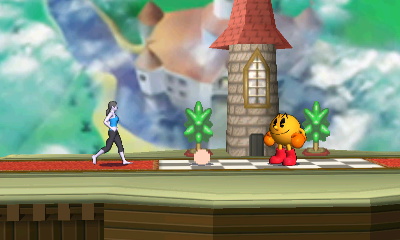 Doesn't that look tasty? It heals you by a whole 2%. Quick, make a beeline for it! Get it before Pac-Man gets it! Wait a minute. Seeing a theme here? Pac-Man left something on the ground and now you're focused on it. What's Pac-Man doing? Who cares, free health! So you run in and dash attack to get it and... you got it! Yay. Congratulations, you got 2% health back. But hold on. What's this? You dash attacked into Pac-Man and shielded it? I hope you weren't playing a character like Dedede because here comes the pain train and that pellet was ticket. Woo, woo. This is yet another case of Pac-Man knowing what you're going to do. However this is easy to get around. Run past the pellet and grab Pac-Man and throw him away. Now grab the pellet. Problem solved. Don't do that too often though or else Pac-Man will expect it. Another option is to let it go. 2% isn't that great anyway. If it was, Wii Fit Trainer would be amazing.

The most used projectiles in Pac-Man's arsenal are his Bonus Fruits. I won't get into what each one does, look it up if you really care, but I will say how to deal with them as a whole.

You can reflect fruits if you have a reflector. Knock them back in Pac-Man's face. The exception to this is Pit and Dark Pit because their reflectors, for some reason, are real bad about reflecting the fruit back at Pac-Man. Now, what fruit to reflect? If you think the answer is all of them, then you are wrong. You can reflect almost all of them. Don't reflect back the Melon. Why? 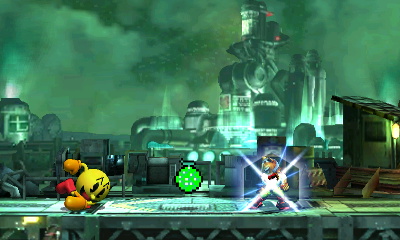 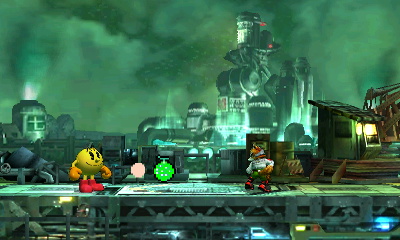 Now there's a pellet on the ground and now you have a pellet situation. Congratulations.

But what if you are playing a character that doesn't have a reflector? Fruits are annoying and dangerous. Keys hurt a lot. But there is good news. Barring projectiles, fruits lose to every hitbox, no matter how weak. Want proof? Block keys with Marth's jab, I don't know if it's fun for Marth but it isn't fun for me. On the projectile end, there are usually 3 fruit you need to look at when using projectiles.
There is a bit of gray area but that's for you to learn on your own.

Whenever a fruit hits something it bounces up and disappears. Galaxian, Bell, and Key are a little special. They keep going but lose their hitbox making them super safe to pick up. Galaxian can hit again if it hits a shield or someone though so watch out.

But catching fruit is hard, you might say. Well you're wrong. It easy to do, but maybe not online. Key can be hard though and if you miss, it'll hurt. There are 3 ways to catch fruit:
Some characters have other ways of grabbing the fruit with their specials and Link and Toon Link have an easier time catching keys with their Hylian shield.

Anyway, congratulations, you caught the fruit. Pac-Man is mad, he wants it back so what do you do? It's quiz time! Do you:

A. Keep it forever
B. Throw it back
C. Z-Drop it
D. Chuck it at the ground
​
Well the good news is, there is no wrong answer unless you picked D. D is wrong. Why do people do this? I don't understand it. They get the key after I keep Z-dropping it on their head, and they're like, "I don't want it. I'll chuck it down on the ground where it won't do squat." Makes no sense. Now let's look at each option.

You grabbed Pac-Man's Fruit. It's yours. How could Pac-Man chuck away these fruit? It's so pixilated. He doesn't understand this fruit the way you do. He doesn't deserve this fruit. This fruit is your soul-mate. He's only getting this fruit if he pries it from your cold, dead hands.

This strategy is good an all if you have the special moves to do it. This is great on characters that rely on their specials anyway as the fruit won't be much of a hindrance. On characters that are not fortunate enough to have these specials, then I'm sorry. Your soul-mate has got to go. It's either the fruit or your limit, Cloud. 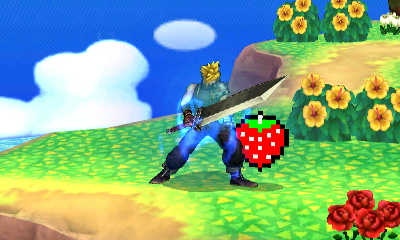 (Every time I see this, it is both sad and hilarious)

Fruit? What is this? You don't want fruit. How dare that Pac-Man. You'll throw it back. That'll show him.

This is a viable tactic for every character but all too often I see people immediately toss it back. Hold on to it for a bit, make Pac-Man jealous. Then Pac-Man tries to get it back, WHAM!

Aha! Now you have the fruit. Now you can Z-Drop it and combine it with your own moves. It'll be great. Again this falls under the "Keeping it forever" mentality of not everyone can do it that well. Most of this comes down to lack of Z-dropping experience and playing a character that doesn't move much and doesn't have moves that compliment the fruit. This is highly character-specific and as such, I will not go into detail. Try it out if you are interested though.

Chucking it on the ground

It's unfair. You hit Pac-Man offstage and he makes it back, while you get thrown off and don't make it back because you decided to play Little Mac. Well the good news is, Pac-Man's recovery isn't as good as you think. He has two ways to recover, Power Pellet and Trampoline. Power Pellet marks where Pac-Man will go. Easiest Counter ever. No counter? Spike him. No counter or Spike? Punish that horrendous endlag. Trampoline blocks spikes unless it's like at 200%. Then Pac-Man will go through it. But if you are good and challenge it, Pac-Man will never be able to recover from a height that requires the third jump on the trampoline because you stole it. 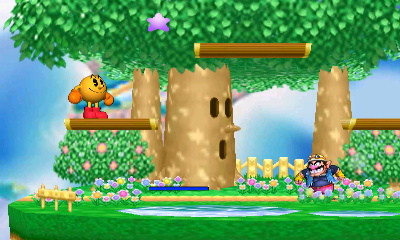 Wario can wait out the trampoline or he can go up top. That will tip off Pac-Man. Or, you know, you can just charge ahead. What's the worst that can happen? 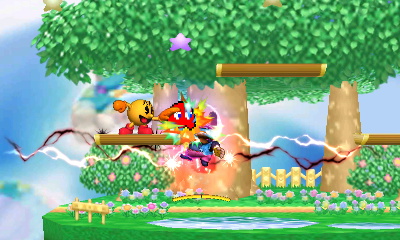 Wario's just being a baby. Walk it off Wario.
Likes: alexfang452, MercenaryOfPie, MeatOfJustice and 5 others

As a Dedede main and secondary Wario, Pac-man is a struggle. Thanks for the tips!
Read more…
Top Bottom