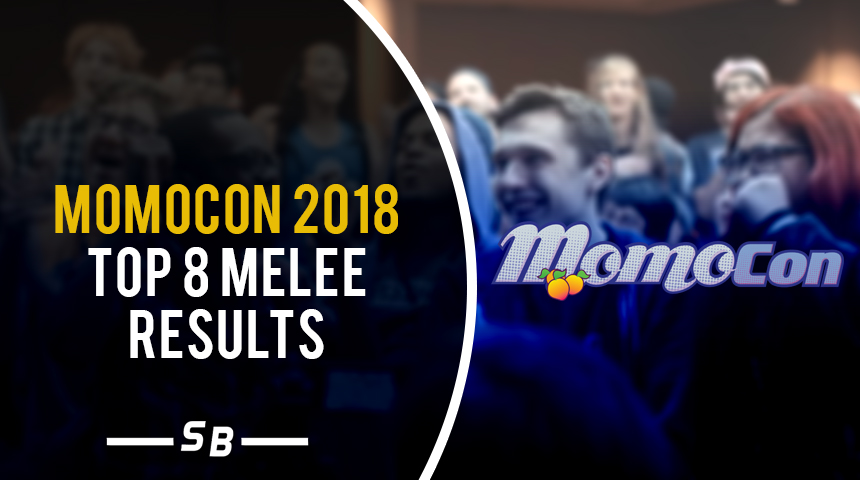 Momocon is one of the biggest geek culture events in the Southeast region of the United States, and it returned for its second year as host to another exciting bracket for Super Smash Bros. Melee. Momocon 2018 had some of the world’s best players in attendance, mixed with a strong showing from the Southeast. Here, we will take a look through the Top 8 finishers, and the journeys they took through Top 48.


Coming out on top was Liquid’s Juan “Hungrybox” DeBiedma. While there were several potential obstacles in his way, Hungrybox showed another dominating performance. With his record in 2018, very few seem to be able to challenge him, and even less have been able to topple him. For Top 48, he made an incredible run and only dropped one game throughout the entire bracket. He defeated TheRocketInYourPocket(2-0), Ridz(2-0), iiwii(3-0), La Luna(3-0), Mew2King in Winner’s Finals(3-1), and Wizzrobe in Grand Finals(3-0). While Hungrybox stumbled at Smash Summit 6, it’s being made clear again just how powerful he is. With Evo 2018 just over two months away, the question is whether anybody can close the gap in time.


Coming out at second was Fry’s Electronics’ Justin “Wizzrobe” Hallett. Over the past year, Wizzrobe has knocked on the door of Godslayers, and he continues to do so with his performance at Momocon 2018. For Top 48, he ran through paintman(2-0) and Arakune(2-0) before falling to Colbol in the Top 8 qualifiers(1-3). Picking himself back up, Wizzrobe made a huge run towards the end. He eliminated Crunch(3-0), HTwa(3-0), La Luna(3-0), got the runback on Colbol(3-1), and defeated Mew2King in Loser’s Finals(3-0) to earn a spot in Grand Finals. With a strong victory over Mew2King, he faced the biggest obstacle yet in Hungrybox, and his run was put to an end(0-3). While second is likely not Wizzrobe’s ideal placing, he was able to pull together better than his performance at Momocon 2017. The two who eliminated him last year were Colbol and Mew2King, who he managed to defeat this time around. Growth is still showing for Wizzrobe, but it seems he’s still got some more distance to cross.


Coming out at third was Most Valuable Gaming and Echo Fox’s Jason “Mew2King” Zimmerman. As the returning champion of Momocon 2017, Mew2King was looking to put a second championship under his belt. His journey through Winner’s Bracket was smooth going, as he defeated RJW(2-0), Crunch(3-0), HEwa(3-0), and Colbol(3-1) to qualify for Winner’s Finals. There, he was stopped by his biggest obstacle, Hungrybox(1-3). In Loser’s Finals, he was given his second loss by Wizzrobe(0-3), and eliminated from the tournament. Mew2King still seems to struggle with securing a first place finish in the presence of other Top 5 players. Yet, Smash Summit 6 showed us that he can pull through, despite the odds. We will have to see how he manages in the months lead in up to Evo 2018.


Coming out at fourth was Smash Studios’ Colin “Colbol” Green. Colbol had an explosive Q4 performance for 2017, but his 2018 year has been quiet so far. Yet, he exploded back into the spotlight with an impressive performance at Momocon. His journey through Winner’s Bracket had him go through Timebones(2-0), Sharkz(2-0), Wizzrobe(3-0), and HTwa(3-0) to qualify for Top 8 Winner’s side. In Winner’s Semi-Finals, he met one of his demons, Mew2King, and lost(1-3). In Loser’s Quarter-Finals, he defeated n0ne convincingly(3-0), and made his way to Loser’s Semi-Finals. Yet, his tournament run was put to an end by Wizzrobe, who came back with a vengeance(1-3). While fourth is lower than Colbol’s second place at Momocon 2017, this is not a sign of him slipping. Rather, the only players to defeat him were Top 10 ranks, of which he took a set off of one.


Coming out as one of the fifth place finishers was Allegiance’s Edgard “n0ne” Sheleby. UCF or not, n0ne continues to push himself in Melee. His journey through Winner’s Bracket had him defeat Austintacious(2-0) and Tubesssbm(2-0), before losing to La Luna in the Top 8 qualifier(0-3). For Loser’s Bracket, he defeated King Momo to make Top 8(3-0) and continued by beating Yort(3-0). His tournament run was put to an end when he met Colbol in Loser’s Quarter-Finals(0-3). n0ne finished out in an interesting manner for Momocon, as every one of his games was a shutout. He was either well ahead or behind his opponents, making him a Gatekeeper of the tournament. Though, this will likely change by the end of the year.


Coming out as the other fifth place finisher was Misfits’ Ryan “La Luna” Coker-Welch. La Luna has had an on-again, off-again 2018, and it seems this was one of his better performances. His run through Winner’s Bracket had him defeat It’sOgre~(2-0), SmashBob SquarePants(2-0), and n0ne(3-0) to qualify for Top 8. There, he was hit with back-to-back loses against Hungrybox(0-3) and Wizzrobe(0-3). Like n0ne, La Luna had only shutouts for results, and like Colbol, he only lost to Top 10 players. If there was a missed opportunity at Momocon 2018, it was to see him face off against Colbol. Regardless, La Luna is poised to have an explosive 2018.


Coming out as one of the seventh place finishers was Troy “Yort” Hancock. Along with HTwa, Yort was one of the Georgia natives to make it to Top 8 at Momocon 2018. He's been on and off the Georgia Power Rankings throughout his career, and thus was among his better performances. His run through Top 48 looked to be in trouble when his first round was a loss against iiwii(1-2). Yet, Yort picked himself up, and earned the longest run through Loser’s Bracket for the tournament. He defeated t2j(2-0), FullMetal(2-0), SmashBob SquarePants(2-1), Tubesssbm(2-1), and got the run back on iiwii(3-1) to qualify for Top 8. There, his run was put to an end by n0ne(0-3). With impressive wins over both ranked players of his own state and neighboring states, Yort may be a growing presence. We will certainly need to keep an eye on him for the future.


Coming out as the other seventh place finisher was Harriet “HTwa” Turner. HTwa, like Yort, was one of the hometown heroes to push all the way through to place within the Top 8. On the latest Georgia Power Rankings, he was placed second behind Druggedfox. His run through Winner’s Bracket had him beat SDeems(2-0) and Een!(2-0) before losing to Mew2King(0-3). In the Top 8 Qualifier, he won a nail biting set against the highest ranked Tampa, FL player, Arakune(3-2). His tournament life was put to an end by Wizzrobe(0-3) in Loser’s Eighths. HTwa exists in an odd spot for placement. The only losses he had were against Top 10 players, and we never got a chance to see how he would do against other members of SSBMRank. Perhaps we will get that chance in the future.


Momocon 2018 was a fantastic follow-up to the previous year’s Melee tournament. Unfortunately for it, it ran on the same weekend as Eden at Combo Breaker, which likely hurt its ability to attract more players. Hopefully, it returns next year without overlapping another tournament. Regardless, the tournament was still a success, and the chance to watch local talent engage top players is always worth a watch.

If any of you out there have never watched Hungrybox play, he is unbelievably amazing. It's no wonder he is the top Melee player in the world.
You must log in or register to reply here.
Share:
Facebook Twitter Reddit WhatsApp Email Link
Top Bottom