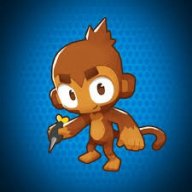 Hey everyone! I'm extremely new here so sorry if there's something wrong with this thread

Anyways, here's my explanation of who Dart Monkey is, what his series is about, and why he should be in Smash

First, what is the Bloons series? The first game in the series, Bloons, was released on March 27, 2007, developed by Ninja Kiwi Games. It featured a monkey throwing a limited number of darts at balloons, named Bloons. It was inspired off of carnival games of the same premise.

There was a level creator website called Bloons World which was shut down in 2014 due to inactivity, bullying and malicious ads. Some of the levels are still available to play in the Bloons Player Pack series, which were fan-made levels

There were also some official level packs to the game: More Bloons, Even More Bloons and Bloons Insanity Pack

The sequel to Bloons, named Bloons 2 was released on September 24, 2010 to celebrate 1 billion plays of the original game It also received 2 official level packs: Spring Fling and Christmas Expansion

There weren’t anymore Bloons games released after that though because of the success of one of the spinoff series: Bloons Tower Defence

The first Bloons Tower Defence (Bloons TD) game was released in mid 2007, with a sequel later that year. They were revolutionary in the Tower Defence genre

Arguably the most popular game in the series, Bloons TD3, was released on September 2, 2008. It was very popular with children in school because it was on one of the few gaming websites that weren’t blocked on school internet, CoolMathGames

The later games weren’t released on the website due to having features such as optional purchasable in-game currency and a Ninja Kiwi account, which could be used for basically every other Ninja Kiwi game

Although the TD series isn’t as popular as it was back then, it’s still going strong with a 6th game and even a crossover with Cartoon Network’s Adventure Time show

Now, with that history lesson out of the way here are some reasons that Dart Monkey would be great in Smash

2. Dart Monkey is one of the best choices for a mobile game character, although I do recognize that there are a few more likely choices such as a Granblue or Dragalia Lost character

3. Bloons TD’s upgrade mechanic could be a very unique gimmick

4. Flash games were a big part of gaming, it would be cool to have a character to represent them, especially with Flash ending support this year

5. Bloons TD6 is one of the highest selling mobile games next to the likes of Minecraft and Geometry Dash

6. Dart Monkey could be considered a “Zoomer character”, something that Smash is really lacking in

7. There are Bloons games on Nintendo consoles (this doesn’t really help Dart Monkey’s chances, but it does show that Ninja Kiwi and Nintendo have worked together in the past)

Now, the only thing really holding Dart Monkey back is Bloons’ lack of popularity in Japan, not even being in the top 50 games on the App Store or Google Play

Here’s a question I’ve seen a few times. “Why Dart Monkey in particular?” Dart Monkey is the face of the series and has been around the longest. Also, most of the other monkey characters are just Dart Monkey with a different hat/weapons

I also created a moveset for Dart Monkey, its VERY projectile heavy because of how Bloons TD has nearly 0 characters with melee attacks so please, take a look

-Jab-
⁃ Throws a dart, if held, it becomes a charge shot like the original Bloons games, he can also throw items with the charge shot

-Floor Attack (Getup)-
⁃ Dart Monkey slams a Flash Bomb on the ground, stunning anyone right beside him, then gets up

-Dash-
⁃ Dart Monkey trips and drops a pile of Road Spikes, there can be only one per Dart Monkey
⁃ An indicator appears if there are multiple Dart Monkeys

-Tilts-
Up
⁃ Dart Monkey throws an alchemist potion which deals damage, then has lingering damage
Forward
⁃ Dart Monkey shoots Glue from the Glue Gun forwards, if it hits, the opponent takes lingering damage and decreased ground speed, if it lands on the ground, it stays there for a while, the same effect happens when someone walks on it
⁃ An indicator appears if there are multiple Dart Monkeys
Down
⁃ Dart Monkey places down a Engineer Turret, it attacks over a short range with very light damage
⁃ The Turret can be destroyed
⁃ It can only damage, not launch
⁃ One Turret per Dart Monkey
⁃ An indicator appears if there are multiple Dart Monkeys

-Final Smash: Late Game-
⁃ A Super Monkey Storm swoops down in front of Dart Monkey, if no one is hit, they swoop once more
⁃ Then, a cutscene plays which has a group of Monkey Subs, Ninja Monkeys, Heli Pilots and Super Monkeys attacking the opponent, then, to top it all off, a blast from the True Sun God
⁃ If the attack is going to finish an opponent, an additional part plays which is just Dart Monkey throwing one more dart