Hey dudes! I've been snooping around the Mewtwo boards and noticed quite a bit of activity recently. It's great to see people pooling together time and resources to build up this awesome character. I've been playing Mewtwo as a low tier main since 2008, and now I'm really interested in furthering his development as a character. We all have to do our part as fellow Mewtwo players right? There is optimization to be done, and whether or not his tier placement changes as a result, it's going to be blast exploring Mewtwo's possibilities along the way. To that end:

I played a few friendlies on stream (weekly practice sesh with Kirbykaze) and whipped out Mewtwo. At one point I got a dthrow (opponent Fox d.i.ed in) and because of the trajectory + his %, I was able to cover every single tech option with a fully charged shadowball. I always thought this was possible but I never could get the shadowball recoil to move me far enough to cover tech inwards. So now the ball catches missed tech, in place, and away. If they tech in you can turnaround grab like I do in that match (which means usmash / dtilt / maybe even dsmash are possible). Pretty sick! The full match link is in the comment section. Check the option coverage!

Also something I haven't seen done too much is Mewtwo's ledge-attack (under 100%). It beats spacies UpB clean at angles that may be awkward to cover, and sets up easy offstage edge-guards. This is demonstrated immediately after the shadowball interaction
Last edited: Nov 23, 2015
I

Yo that SB techchase was suave. How much of the recent activity have you read? There's one thread that has an absurd amount of posts with % data and dthrow techchase theorycrafting.
Last edited: Nov 23, 2015 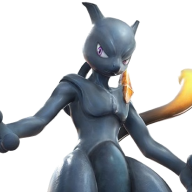 As was already said you should read this thread specifically: http://smashboards.com/threads/advancing-the-mewtwo-meta-game.398111/
It holds everything mentioned before and more. The knowledge is still freeform in nature right now, though but some things like the tech chase guide are priceless.
D

Melee Mewtwo said:
Sadly, the SB full option coverage is pretty much dependent on your opponent screwing up and DIing in (maybe no Di too) on the dthrow.
Click to expand...

I think this perception is problematic. You shouldn't take tools out of your toolbox just because they are 'bad on paper' or counter-intuitive to proper play within the competitive meta. Marth's ken combo only works if your opponent d.i.s the fair inwards to allow the dair, and the same can be said for uair > knee as Falcon, or nair to usmash as Fox, or dthrow to usmash as Ganon on floaties. Do we stop doing these things because they only work with improper d.i.? No we don't, because there is a human element to account for. Fear, positioning, inability to react in time, etc etc. I think dthrow shadowball is perfectly viable under the right circumstances, especially if you sense a particular d.i. intuitively.


The ledge-attack edge-guarding is not new at all. M2k has been doing this for years as Marth, the spacies can do it, and so can many others. It's effectiveness for each character heavily depends on the hitbox of the ledge-attack itself, and I noticed that Mewtwo's hitbox on it is particularly wide and sweeping. If you ninja cookies to the ledge + ledge-attack you have enough invul to go through UpBs (even Marth's), and it also functions as a ledgehog (against illusions) AND it punishes airdodge recoveries if you time it well (it hits them after the airdodge and knocks them offstage with no jump). Again, this is a universal tactic that is more a fundamental technique than a Mewtwo specific trick. But it helps him cover some holes in his edge game.
Last edited: Nov 24, 2015
D

No need to apologize so formally dude. You did nothing wrong. I'm just elaborating on the techniques and why I think they're good. I like when you said "I just wouldn't rely on that occasion occurring". That's exactly how we should view d.i. in on dthrow.
J

This is probably my first post ever on this smashboards. I say this because this might be the wrong thread to post this. Anyway, I am a falco main BUT I recently started to mess around with mewtwo. Practicing tech and comboing fox (etc.)
I NEED to know if anyone can replicate what just occured in my 20XX 4.05

Why is this? Can somebody assist in explaining what happened?
I am assuming it was either inputs during the throw or before..
J

okay sooo it worked with fthrow and im pretty sure the only inputs that are involved is by the joystick..
D

Melee Mewtwo said:
Its probably from you practicing with the savestates command, it'll do that a lot if you reload during your dj for example. Just wait for the full throw animation to finish before reloading again if it happens, kind of an annoying bug.
Click to expand...

Hmm. You're probably right... So, you're saying impossible to replicate this w/o save states?
D