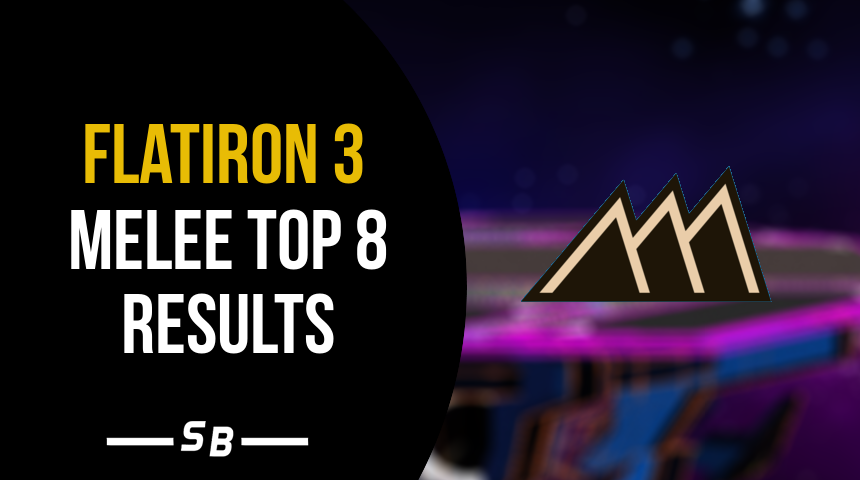 Flatiron 3 was the latest installment of the Flatiron series of Melee events, run by the CU Boulder Esports team. 2018 was a huge boost to the series, as Flatiron 3 was the first iteration to be categorized as a major. More impressive, the organizers were able to run Melee singles and doubles and Wii U singles and doubles for over 400 players within a single day. With close, pulse-pounding sets, great management, and a large amount of out of region players, Flatiron 3 was a rousing success. Here, we will look at the Top 8 finishers for Super Smash Bros. Melee, and look over their journeys within Top 48.

Coming out on top was Team SoloMid’s William “Leffen” Hjelte. Leffen has had a strong 2018, with multiple appearances stateside and strong placings for most appearances. At Flatiron, he came out with everything he had, and showed that his placing was not to be questioned. His run through Upper Bracket had him face and defeat Rishi(2-0), HugS(3-1), KJH(2-0), and Axe(3-0) to qualify for Grand Finals. From there began the toughest sets he had to face in the entire tournament. Axe came from Lower Bracket with a vengeance, earning a bracket reset(2-3) for the second set of Grand Finals. A tough back and forth later, Leffen emerged victorious to earn the title of victor(3-2). Leffen is still going strong for 2018, and the second quarter has just begun. By the time Evo rolls around, he will likely be stronger still.

Coming out at a close second was Tempo Storm’s Jeffery “Axe” Williamson. Axe has been a consistent Top 10 player since 2014, and has stood as both an obstacle and a threat to almost all players. With his performance at Flatiron, Axe has reinforced this placing once again. His run through Upper Bracket saw straight shutouts of Bladewise(2-0), Lucky(3-0), and PewPewU(3-0) to qualify for Upper Finals. There, he met Leffen, who was at the peak of his game, and fell to Lower Bracket(0-3). With a strong rematch against PewPewU(3-1), Axe got his second chance to swing at Leffen. With some effort, he managed to earn the first set of Grand Finals in an amazing comeback(3-2). One close set later, Axe finally fell to Leffen(2-3). Axe has always been nipping at the heels of those at the top, but his growth in 2018 is pushing him even further. This may be the year we see him rise above some of Melee’s biggest names.

Coming out at third was Counter Logic Gaming’s Kevin “PewPewU” Toy. Since 2013, PewPewU was a regular Top 8 finisher, and positioned himself as a threat to anybody in bracket. However, his 2017 saw a bit of a dip in performance, as a result of multiple factors. At Flatiron, PewPewU was at a peak in his play, and came out swinging on many players who had troubled him for the past year. He gained wins over Zain(2-1) and Captain Smuckers(3-1) before falling to Axe in Upper Semis(0-3). In Lower Bracket, PewPewU didn’t stop pushing himself, as he earned wins over Swedish Delight(3-1) and Crush(3-1). In Lower Finals, he once again met Axe, and his journey was put to an end(1-3). Flatiron was one of PewPewU’s best performances in awhile. Whether this means a return to the true threat he once was, or an even greater one, will be seen in the coming months.

Coming out at fourth was Jack “Crush” Hoyt. One of the rising stars of the Melee scene, Crush has become something of a pop icon. As part of his popularity, he has increased his play into a truly threatening one over the course of the past year. At Flatiron, he showed how that trend was not showing any signs of slowing. For his first round of Upper Bracket, he hit a snag as he fell to KJH(0-2). Yet, he only just got started. His run through Lower Bracket was the longest of Top 48, as he met and defeated Bobby Frizz(2-1), Captain Faceroll(3-2), Lucky(3-1), and Rishi(3-0) before getting the runback against KJH(3-1). Yet, in Lower Semis, he met PewPewU, and his journey was put to an end(1-3). Crush had a rising career in 2017, and his 2018 is looking to continue that trend. As of this writing, he is still unsponsored. Hopefully, that changes soon.

Coming out as one of the fifth place finishers was Balance Gaming’s Kalindi “KJH” Henderson. KJH, being a player since 2013, had his breakout in 2015 as a ranked player. From there, he has continued the slow, constant grind towards the top. So far, 2018 has been his best year yet, and Flatiron continues that trend with a strong Top 8 finish. Though his run seems short, KJH was a definitive threat as he defeated Crush(2-0) and lloD(3-1) to qualify for Top 8 from Upper Bracket. Yet, he was hit was some strong contenders, as he fell to Leffen(0-3) and, coming off of a hot Lower Bracket run, Crush(1-3). While this may seem underwhelming with only four sets, both of his Upper Bracket victories were on higher ranked players. KJH may be just be a dark horse for tournaments to come, if he continues the trend of 2018 upset victories.

Coming out as the other fifth place finisher was James “Swedish Delight” Liu. Swedish Delight has been a slowly climbing threat since 2013, and has seen a fair amount of Top 8 finishes the past few years. At Flatiron, he kept that ball rolling. In the first round of Upper Bracket, he was defeated by Lucky(0-2), putting his tournament life at risk. Yet, Swedish Delight found his second wind, and had an amazing run. He defeated Spark(2-1), Kalamazhu(3-0), lloD(3-2), and Zain(3-1) to make it to Lower Quarters. Yet, there he met and fell to PewPewU(1-3), putting an end to his tournament run. Swedish Delight had a shaky 2018 so far, but he is not to be dismissed. His ability to adapt to high-level change will likely see him pushing even further come year’s end.

Coming out as one of the seventh place finishers was VGBootcamp’s Rishi Malhotra. Since 2015, Rishi has had a focus on improving himself in Melee, and the results show. He kept himself within the top 32 of several major tournaments in 2017, and 2018 is shaping up even stronger for him. At Flatiron, he pushed himself through several tough matches and came out on top. In Upper Bracket round one, he fell to Leffen(0-2). Yet, in Lower Bracket, he decided to pick himself up and run. He defeated Zoso(2-0), Ka-Master(3-2), and Captain Smuckers(3-2) to qualify for Top 8. Yet, in Lower Eighths, he met Crush, who was on a serious hot streak, and fell(0-3). While not as far as he hoped, a Top 8 finish for Rishi at Flatiron is still one worth keeping on his belt. Time will tell if he continues the trend for the rest of 2018.

Coming out as the other seventh place finisher was Panda Global’s Zain Naghmi. Zain was an explosive 2017, and is quickly placing himself as part of the new generation to pay attention to. For Flatiron, he had quite the tough bracket to go through. In round one of Upper Bracket, he fell to PewPewU(1-2). From there, Zain had possibly one of the tougher runs to pull through. To qualify for Top 8, he had to face and defeat Army(2-0), SFAT(3-2), and HugS(3-2). In Lower Eighths, he fell to Swedish Delight(1-3), ending his tournament run. With some big names on that list, Zain proved that he is willing to push through as far as he can. With his current trajectory, we can expect Zain to make Top 8 at more tournaments by the end of 2018.

Flatiron 3 was the biggest of the series yet, and had one of the most explosive Grand Finals sets of the year. While we covered the Top 8 here, many impressive wins took place throughout Top 48. With twists and turns along the way, and some rising stars pushing through, Flatiron was exactly the tournament to showcase where Melee is headed in the next few months. With its impressive management, high-level play, and location, we look forward to Flatiron 4 come 2019, and just how different the Melee scene will be by then.
Last edited: Apr 25, 2018

GreenBread said:
except he lost game 1 and made a 3 stock comeback to win game 3 vs bobbyfrizz
Click to expand...