A (Sorta) In-Depth Analysis of (The) Hero's Moveset

With 2 new characters on the way, it seems like a good idea to try and figure out which moves are which for them. While Banjo's moves are rather easy to identify, it is The Hero or Hero (I'm not sure what we've decided to call them yet) who's moves are a bit harder to decipher. Well, I'm going to attempt to explain what we are seeing. Here are my thoughts on (The) Hero's moves and which moves are which. I'd like to here what other people think too, so please feel free to comment your thoughts about the character as well as what I have to say about them. Also, sorry in advance if my terminology is a bit off. I've never actually played Dragon Quest before, so I'll be using more general terms to describe the characters attributes.

Overall, (The) Hero seems like an interesting character. The magic they use seems to work in a similar way to Robin's, and their use of the sword looks like a slower version of Marth. This does mean we have yet another sword fighter, but at least they aren't just a sword fighter. They also appear to have the same mechanic as Link with their shield where when they stand still, the shield blocks incoming projectiles (Bowser's Fire counts as a projectile). It is the magic which defines this character, and that's where (The) Hero's moveset gets hard to define.

It would appear as if all of (The) Hero's special moves are able to be swapped with one another, like the Miis. The Neutral B appears to be the master of customization though. I believe that the Neutral B is when (The) Hero pulls up the bar listing spells, and I believe I have found all the moves which could be assigned to it. The way I figured out this was by what (The) Hero does when this "move" is used. When used, they strike a pose as if they were thinking, and once a move is picked, 3 see through rings appear around them. Of course, I could be wrong here, as many most of the magic moves shown have those rings. Anyway, due to those hints, I have reason to believe that the moves which can be assigned to the Neutral B are as follows (Refer to the reveal trailer for timestamps): Sizzle (2:26), Psych Up (2:26), Oomph (2:26), Snooze (2:26), Bounce (2:30)(More on this move later), Kaclang (2:35)(More on this move later), Kamikazee (2:39)(More on this move later), A strange punch move performed on Snake at 2:42 (This could be Oomph, but that can't be confirmed), A jump which produces tornadoes at 1:26 (More on this move later), and the lightning shot which is performed at 1:29 (More on this move later). I believe Sizzle is the fireball move we see at 1:16 and at 1:18 as well, and if that is the case, then that move can be charged up.

The charged fireball we see at 1:18 could be something different, though, and that leads us into the Side B. The Side B consist of these 3 options: Kacrackle Slash (2:33), The charged up fireball at 1:18, and the lightning shot at 1:29. The reason I believe this is similar to the Neutral B. These attacks have long range, which is something most Side Bs in the game have. The casting of these moves also doesn't require the thinking pose from the looks of things.

For the Up B, you may have the choice between either Zoom (2:36) and the tornado-producing jump at 1:26. Both provide great vertical movement, but they differ from each other on one major factor: the see through rings. This leads me to believe that Zoom will not require magic to perform. The same goes for Kacrackle Slash. No see through rings are produced during this move, so it may be that these 2 move do not require magic to perform.

Now on to the Down B. I believe that this move may have the choice between Kaclang (2:35) and Kamikazee (2:39). Bounce (2:30) may be an option, though it is hard to tell. Once again, we need to look at the poses. Both Kaclang and Kamikazee make (The) Hero perform a pose with their arms across their chest. This can be easily seen in Kaclang and Kamikazee, but Bounce is hard to tell. I slowed down the footage to 0.25 playback speed, but (The) Hero is mostly obscured by the see through rings and the purple circle during this move, preventing me from seeing the pose clearly.

Another way this character could function is that each spell is specific to each costume. This is unlikely, though, as this would mean that each costume for (The) Hero is technically an echo fighter of the other 3. It would be cool to see, but I doubt that's how this character will turn out.

There is one last way that (The) Hero could function, though I see this option as unlikely. Maybe each input gives you a pop-up, like what I believe is the Neutral B, listing the moves you can use. If this is indeed the case, then this could mean that (The) Hero has 16 different special moves at once. I do see a problem with this idea, though. If this is the case, it would require at 1-4 extra inputs to select which move you want to perform. This would cause this character to be a slow attacker, and would make (The) Hero almost totally impractical to use in a competitive match and would leave the character stuck in Wi-Fi battles doing magic shenanigans.

Summary:
(The) Hero is the strange love child of Robin, Marth, and Matt from Wii Sports who stole Link's shield who goes to Comic con as an anime protagonist from some nondescript show. In all seriousness, they're going to be a interesting character. I doubt I'll play them, as sword characters really aren't my type, but they'll make a good addition to the roster. While they may indeed be a amalgamation of multiple other fighters that we have, (The) Hero will still bring their own unique style to Smash, and will most likely require skill to play.

Anyway, that's a wrap for me. Once again, feel free to comment on what you believe which moves will be which, what you think about my assessment, and if I missed anything. I've included the character reveal trailer so you can easily view my timestamps. Let's see if this thread holds true once we get more information on them. 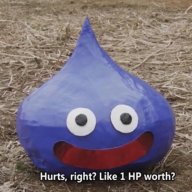 I'm leaning in favor of each special pulling up a menu, that just feels far more faithful to Dragon Quest than the sort of customizing your load out type thing. Also, a little detail I noticed that makes me believe that even more is that, very very briefly after casting Zoom in the reveal trailer, Eight strikes the same thinking pose, and then casts zoom. To me this shows there's options when it comes to each special move, but that there's also way to sort of "hot key" a certain special move for each one, maybe by shielding out once you highlight the special move, like hovering over snooze then quickly pulling up the menu and releasing again very fast once you need to use it. That would make the special moves far simpler to pull off while still having as big of a variety as 16 to choose from.
You must log in or register to reply here.
Share:
Facebook Twitter Reddit WhatsApp Email Link
Top Bottom