What's new New posts Latest Articles New resources New profile posts Latest activity
I never got why frame rate and other graphical things are used to advertise games. Who looks at a game's store description and thinks "ooh goody, 60FPS and ray tracing!" and not y'know... "ooh goody, high difficulty and tight controls!" or something actually substantial like that?
Sometimes it can come off like a company is hiding some dark secret when in reality they just have a super incompetent and clueless PR department.
One thing I like about fighting games is combos. My technical skill sucks but I do execute several of them successfully. For that reason, I prefer doing beginner and intermediate combos.

My opinion of the night--Tekken series rates #1 for having the coolest-looking combos! Smash comes in close second.
Reminder: Catscratch was based on a dramatic mecha comic.
When you find out Circle of Life's Zulu lyrics translate literally to
"There comes a lion, oh yes it's a lion (x2),
lion, we're going to conquer, lion,
it's a lion and tiger (x9)"
it becomes a lot less epic and powerful.
Okay, WTF just happened in Battlebots?
As a Brit I am not at all offended by lots of movie villains having British accents - what offends me is the specific accents they choose. The stereotypical "posh British villain" accent is nowhere near as threatening and confrontational as a cockney accent.
The sun is a deadly lazer.
Will Bales, please never change.
In The Big Bang Theory, Leanord is the protagonist and Sheldon is the deuteragonist/comic relief.
your music taste is Rockin'
Remember when people were unironically comparing SpongeBob Rehydrated to Last of Us Part 2? what a cursed time period.
I wrote this as a message earlier but I removed it as it got pretty personal. Basically, my grandma and mom are in the hospital with COVID. My dad also has it and is “quarantining” from home (he’s been going out on motorcycle rides every so often). My grandma isn’t doing so well but there hasn’t been any changes since the beginning of this week so that’s good news I suppose. My mom has improved slightly but still has a high fever and trouble breathing. My sister and her husband got checked as they had thanksgiving with my parents but they tested negative. One of my mom’s bible study friends that came over over Friday also now has it but the twelve other women either tested negative or haven’t taken the test. I wish I could help or do something but I can’t do much from Japan. Most of my family also thinks this virus is a hoax and still maintain this line even though they contracted it. They often call it the Wuflu, Kung-flu, and the China Virus and they fully believe this was a NWO/Deep State scheme to remove Trump. Regardless, I still love them and I hope we can get through it.
When you're younger and search up Character X Character cause you think X is just a cooler version of Vs:
I know this is really annoying and nitpicky, but it always kinda bugs me when people refer to Coronavirus as a plague. It’s not.

Edit: All I’m saying here is that plagues are caused by bacteria, not a virus. I’m not trying to downplay the severity of the Coronavirus at all

Released onto the Discovery Twitter page, a sneak peek into the new season! Airing December 3rd, how far will these bots get?! Please do share these videos, ...

An exclusive preview into the next season of battlebots. In Episode 4 of Season 2 of Josh Gates Tonight, Josh visited the set of Battlebots and had a whirl a...

m.youtube.com
“Hmm, what’s MK Ultra? Sounds like the name of a streamer. I’ll have to look it up... WHAT THE FU-“
TF2 Smissmass Update with new maps POG
Crono is a character I definitely would want in Smash more if he was less bland and design wasn’t so bad

I love how Klinklang randomly just has like 3 signature moves (Shift Gear, which later became a move learnable by Toxtricity and Magearna, Gear Up, which it shared with Magearna in Gen 7, and Gear Grind, which it still has.)
My father just came to me sending me threads and menaces over my desire of dropping out of college for a year.

And that, my dear profile post readers, is why I developed a fear to take risky choices throught the years.
AAAAAAAaaaaaAAAAAAAAAAAAAAAaaaaaHHHHHHHhhhhhHhHhhhHhHh
Would you be content with this pass?

6. Min Min.
7. Steve.
8. Dante.
9. Crash Bandicoot.
10. Geno.
11. Rex & Pyra/Mythra.
I'm so ready to not watch the Game Awards, catch up with the news the day after and see all the drama from both the games which won and the reveals themselves.
Hopefully, we never get an Undertale live action movie. I don't want to imagine the final neutral run boss in real life.
hands you a Dreepy pog?
Ever sneeze so hard that tiny pieces of food come out? That happens to me sometimes.
Best birthday present ever:

I love when videogame composers go above and beyond in games that probably don't deserve such amazing music.

(And no these are not fake Silvagunner rips)

I hate that quote so darn much.

Strength is not an illusion. Anyone with eyes and a brain can see how laughably unbalanced Pokemon is as a game. That's not selfishness. That's just a fact.

You can try to win with your favorites, but that's only going to work ingame, where the game is designed to be so easy and thoughtless, a 6 year old can beat it by just pressing the A button enough times. Of course anyone can win with their favorites there.

Funny how Karen only says that after losing. Beforehand, she says "Dark Pokemon are so strong!" What was that again about a "selfish perception"?

Also there's this one NPC in the Battle Chateau of ORAS that says the exact opposite.

You know, the Battle Chateau. The area in postgame exclusive to Trainers STRONGER than the Elite Four. I'd say someone clearly above the Elite Four has a better idea of what they're talking about. 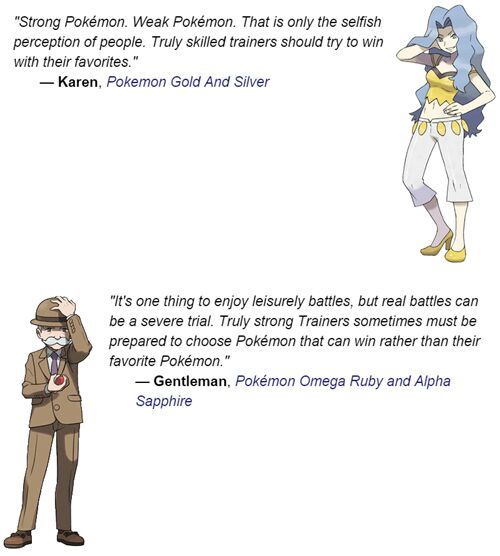 I could only imagine what Wii versions of the Danganronpa games would be like. It would be fun going through the class trials with a Wii Zapper, kind of as if it were one of those rail shooters or "light gun" games at the local arcades.
I need to play Splatoon 2 again, I haven't played it since the final Splatfest. It's a fantastic game that I totally did not sink 400+ hours into.
One of the dumber things I've heard someone say is how "Pokemon spoils its fans." That's a real kicker.
This really was a weird year for Nintendo. I mean, their only real two holiday titles are:

1. Not even Nintendo’s idea

2. A translation of a game from 1990, and it’s not even a holiday title if you live in Japan
So the Nintendo Switch has a pretty big problem: sometimes users under the age of 18 can’t look at any M rated games on the e-shop, even if there isn’t any parental controls at all. I’ve been trying to download Doom, but it’s not working for me
I miss the old days when the Male Protags in Pokemon didn't look super boring.


And even then there are literally zero interesting customization choices.
Top Bottom