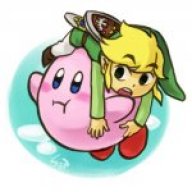 As I'm sure many Kirby users in Smash Ultimate are already away of, Kirby's Forward Throw in this game puts him much higher than in previous games. While this on paper should make followups at higher percents more feasible, it has come with the unfortunate side effect of putting Kirby RIGHT ON platforms with the same height as Battlefield's lower ones which really screws with his throw combo game there. I have been told that it's possible to fast fall through the platform after the throw so that you can hit a F-Air 1 and combo unimpeded, but I have yet to do this and it was said the timing is very strict.

Thus I am here to tell you of 2 main workarounds to this should you find yourself getting a grab beneath a super low level platform:

This method will work when your opponent is at a midish enough percent that they'll land on the platform with you. Since you'll be on your feet and they'll be plopping onto the platform you have a couple options. You can attempt to Jab Lock them with moves like Jab or D Tilt. Once locked they'll be opened for a nice punish. But you can also anticipate a tech or getup, and tech chase them for a punish. Find when various characters tumble off F Throw onto the platform. This will generally happen in the 30-50% range.

For a more consistent combo option, there's Final Cutter. When the opponent has about give or take 30%, (for reference this will start comboing on Mario at 34%), you can do F Throw and then mash out Final Cutter after the throw. Final Cutter will start before you hit the platform and it combined with F Throw will give you more damage than a mere D Throw. And since at higher percents, F Throw becomes less reliable to get aerials off of, you'll generally be going for this anyway.


Later I'll update with the list of stages that this happens on but this is here to serve as an easy reference to get around this annoying issue. Hopefully it's addressed in the future.
You must log in or register to reply here.
Share: Facebook Twitter Reddit WhatsApp Email Link
Top