Trying to use Mupen64k on Ubuntu with Wine

So, I'm a Ubuntu user who wants to finally start playing SSB64 online, and I'm having trouble getting Mupen64k to work correctly. I tried Project64k, and ran into problems there too, but I've heard the general consensus is that Mupen64k is better, so for now I'm going to focus on trying to use M64k, though if that ultimately fails then I'll try P64k again. I don't have a Windows OS, and I will get one if it turns out to be absolutely necessary, but that's my last resort. I want to do this with Ubuntu if at all possible.

I'm using version 0.8 of Mupen64k, and Ubuntu 11.04. The main problem I'm having is that the picture is messed up. I've tried the three video plugins that came with M64k, and none of them give good results, though they all give different results. I'll summarize them:
Jabo's Direct3D8 1.6: When I load the rom, I can hear the opening music of the game, but all that shows is a black screen. When I try to click any menu bar option, it freezes and I must force the program to quit.
Jabo's Direct3D7 1.40: What's weird about this one is that when I have it selected as my video plugin, I can't configure it. Clicking "Configure" or "Video options" has no effect. When I load the rom, the screen goes black for a moment, then the M64k window resizes and goes to the top-left corner of the screen, like this: 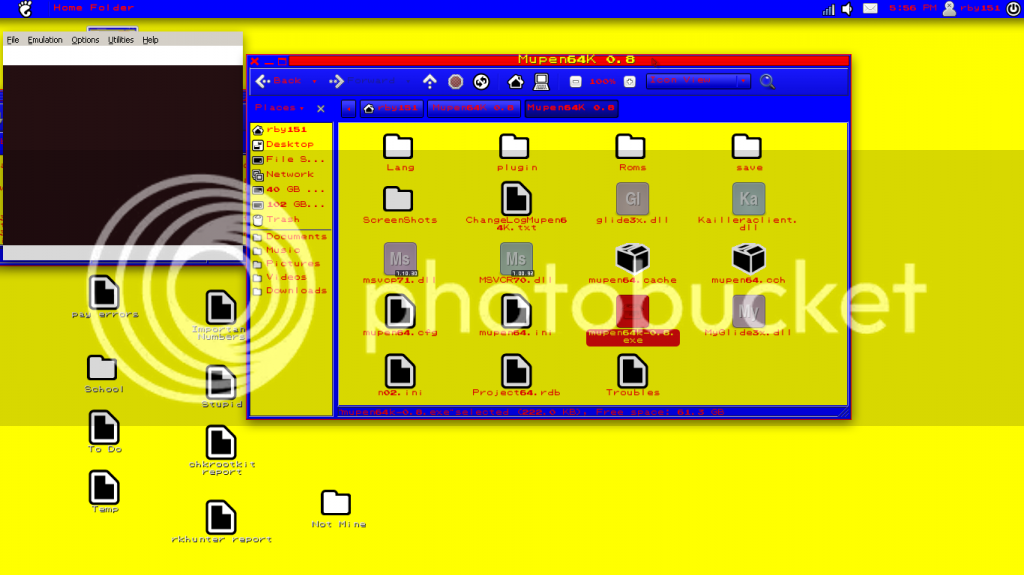 The M64k window becomes darker, then it returns to normal brightness as I hear the opening music of the game, but the window just shows a solid black screen, flickering to other solid colors like white and grey and reddish brown. I put it in fullscreen mode, and I can actually see the game, but the graphics are messed up; a lot of them are absent or just black where there should be color. Also, some of the moving graphics create weird tracers, and other stuff on my computer screen shows a little bit near the edges; it's hard to explain so here's a picture: 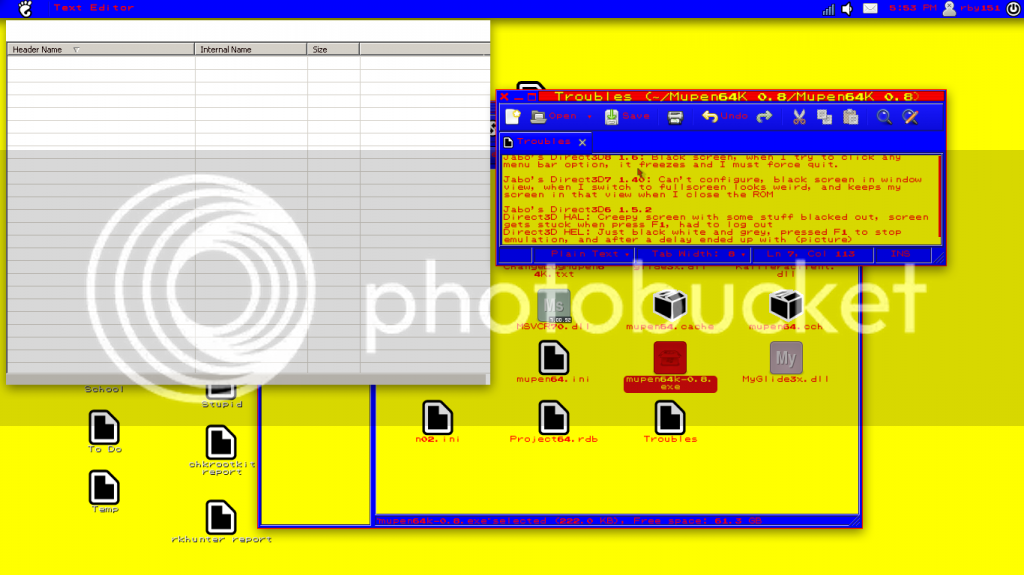 I have to right-click the Wine icon in the launcher and select Quit.
I really wonder what is preventing this from working. Do I just need to change some other settings within M64k, do I need to download a different video plugin, or is some compatibility deficiency with Wine causing this? Or some combination thereof? By the way my video card is an Intel HD Graphics 4000.

There's also one other issue I happened to notice: The emulation was laggy at times. I didn't expect it to lag on my computer; my processor is a 3rd generation Intel Core i5-3210M (2.50 GHz 3MB L3 Cache - 2 cores plus hyperthreading), and I have 8GB of RAM. Is that not good enough to run M64k smoothly?