The Smash World Tour's first stop: An Analysis of Mexico 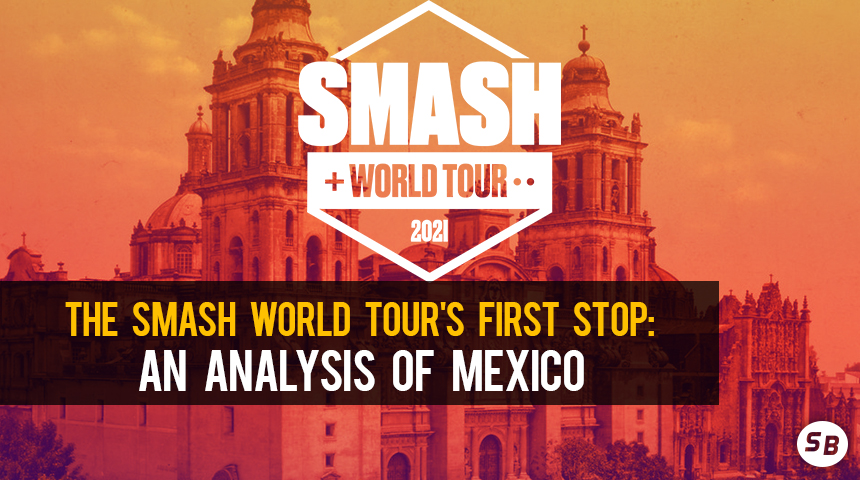 While Mexico has been a very powerful region for years, many of their best players have been unable to attend major events in the United States. Visa issues and lack of nearby major events for the bulk of Mexico’s talent have only heightened issues.

Despite the immense flaws in Super Smash Bros. Ultimate’s online, it has exposed the world to many players - and a lot of them hail from Mexico. The top 50 of the WWRv6 (Wifi Warrior Ranking) lists 6 Mexican players from varying regions, with 4 of them in the top 11.

While Leonardo “MKLeo” Perez is no stranger to rankings, it’s here we see more wifi oriented players such as Edgar “Sparg0” Valdez take the helm. The two are accompanied by familiar faces such as Enrique “Maister” Solis and Santiago “Chag” Perez. The former is a top 10 PGR (Panda Global Rankings) player, and the latter is a longtime Central Mexican player who has variably been a top 100 player since 2018 on rankings such as the PGR (Area 51) and OrionRank.

While not every top Mexican player is among the 300+ attendees - with Hector “Meme” Ochoa and Arturo “Joker” Ochoa among the absentees - many of Mexico’s top players from Northwest and Central Mexico will be participating.

-West Mexico, which is headlined by Guadalajara. This region has long been a den of hidden boss players, most notably Mr. Game & Watch main Alejandro “Regi Shikimi” Martinez and Edgar “Bedgar” Sahagun. The latter won’t be attending, but long-time veteran Regi will be there, as well as top Shulk main Luis “FuerzaDON” Morales.

Recent WWR inductee Luis “Nery” Flores will also be in attendance. He is currently considered the best Isabelle player in the world. Both he and top Toon Link main Oscar “Ang” Anguiano are likely the best Northeastern Mexican players attending, both ranked in Saltillo, one of Mexico’s strongest subregions.

-Northwest Mexico is likely to be the second-most-familiar region, as it has the city of Tijuana, located in Baja California. Sparg0 is their best, but others in attendance at this event include Snake main “AlanDiss”, Luigi main Mario “WaKa” Cervantes, and R.O.B. main Eric “Ez” Z. “Andrik”, a Captain Falcon main from Mexicali, will also be in attendance.

Additionally, this region includes states of Sonora and Chihuahua. Hector “CK” Soto, a R.O.B. main ranked 2nd in Sonora, will be attending.

-Southeast Mexico is the least well-known of Mexico’s regions, but R.O.B. main “Bonilla” and Luigi main Said “Who” Mena are the region’s top players in attendance.

Per the Smash World Tour’s website, the top 8 placing players at this event will qualify for the Smash Factor in-person regional finals. This covers “Central America”, which includes the larger areas of Mexico, the Carribean, and the traditionally defined Central America between South America and Mexico.

This tournament will be sending 8 players to Smash Factor’s regional finals, and we will ultimately see 6 from this broader area in the finals this year, making it among the most competitive regions to watch this year.

The top 16 seeds leading into the event:

It seems fairly certain that the first four will qualify, as they are all ranked near the top of the WWR. After this, things become more uncertain.


A Fight for Smash Factor - Eight Early Sets to Watch

Some of the most significant matches in the tournament will occur in Phases 2 and 3, where top seeds meet and cross-country talents fight.

Bonilla vs. Nair^ - While the following projected match of Chag vs. Nair^ is definitely one to watch, Bonilla is one the event’s main wildcards. Hailing from the obscure Chiapas region, he is a potential hidden boss that could break up the projected bracket.

AlanDiss vs. Daige - In a match that pits Northwest Mexico against Northeast Mexico, Daige’s skills as a Sonic player could be tested significantly. AlanDiss is a Tijuana native with experience versus “AlexDisC”, Tijuana’s top Sonic player. AlanDiss is seeded to win, but Daige upsetting him could position a rematch between Daige and Maister, who have a 1-1 offline record.

Maister vs. Axem Chriz - Axem Chriz, formerly Chrizer0, is one of Northwest Mexico’s most significant hidden boss players. He has been successful at events at least as far back as Smash Factor 4 (2015), and rarely travels out of region. This hidden boss player could present an unexpected challenge to Maister, making it a set to watch.

MKLeo vs. Rinku - Rinku went unmentioned until the seeding section, but he is a top Robin that could pose a serious threat to MKLeo depending on who he plays at this event.

Andrik vs. Nery - While Nery is a ranked & well accomplished player, he is seeded just one spot below Mexicali player Andrik. Most of Baja California’s talent resides in Tijuana, but Andrik - hailing from the state capital - may explode onto the scene with a post-buff Captain Falcon. This crucial set is among the most potentially competitive.

Skyjay vs. Leaf - Leaf, seeded relatively low, has defeated many top Mexican players both on and offline, and could present a serious threat for Skyjay - particularly due to Mexico’s high number of Incineroar mains.

BigBoss vs. FuerzaDON - Central Mexico’s best R.O.B. will face off against the country’s best Shulk player in Phase 2, giving West Mexico a chance to force their way into Sunday’s Top 32. BigBoss is favored here, but FuerzaDON is a long-time Wifi player with a solid amount of experience in the R.O.B. matchup.


Where to Watch & Other Resources

y'know, if this pandemic ends anytime soon here, perhaps we in the states should reach out to these other communities around the world. best way to get more coverage on these players as well.

I mean, imagine where the Melee players here in the states would be if Ken never went to Japan and seen what the japanese community, not just Bomb Soldier, had to offer in ideas...