The Climax of Crews: How We Escalated to Civil War 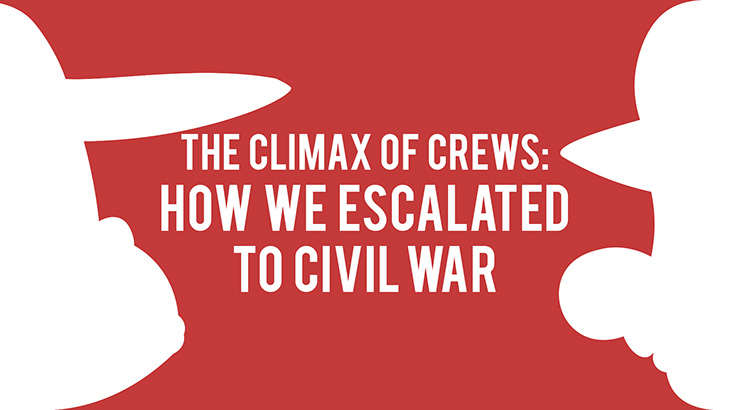 With the conclusion of 2GGaming’s grandest event to date, 2GGC: Civil War Saga has set the bar for any and all Super Smash Bros. events. The focus of this event was none other than the eponymous Civil War event, a crew battle consisting of a ten-versus-ten being helmed by Gonzalo “ZeRo” Barrios and Elliot “Ally” Caroza-Oyarce in settling a year-long rivalry that had developed over the course of the 2016 competitive year of Super Smash Bros. for Wii U. Crew battles are far from a recent innovation in event organizing with Civil War being the latest and greatest of recent events, and with good reason it may be a while before any crew battle challenges what Civil War has brought to Smash Wii U.


The History of Crews​
Crew battles themselves date back to the early years of Super Smash Bros. Melee, with the first national crew battle taking place at MELEE-FC1 in 2004. While the format became less prominent in later years, it remained a staple side event at Smash majors, and with the advent of Super Smash Bros. for Wii U, it has become a main attraction once more.

Flash forward a year later, and crew battles have become a main attraction at most Smash Wii U majors, to the point of saturation. The past four Smash Wii U majors - The Big House 6, 2GGT: ZeRo Saga, Genesis 4 and Frostbite 2016 have all featured crew battles in close proximity, and all but the former have heavily promoted them as main attractions.

As crew battles have become more frequent, they’ve begun to lose their luster not just for spectators, but for the players themselves. As crew sizes have increased, crew battles themselves have grown longer and more mentally taxing on players. For players who are still in the main bracket, focusing on crews could potentially have an adverse effect on their performance. This holds especially true for events like Genesis 4, which featured multiple crews with ten players each in a round-robin format that led up to a final twelve-vs-twelve crew battle. Crew battles were beginning to become more of a test of stamina than a performance of pride and skill. Team ZeRo vs. Team Ally, on the other hand, was more than just another crew battle. It was the culmination of ZeRo and Ally’s nearly year-long rivalry, one of Smash Wii U’s most prominent storylines, and a celebration of the way it’s shaped the community.


A Rivalry a Year in the Making​
ZeRo and Ally’s rivalry goes back to spring of 2016, sparked by Ally’s wins against ZeRo at both Get On My Level 2016 and Smash ‘N’ Splash 2 and the ensuing trash talk between the players. The community’s reaction, particularly among top players, prompted a tweet from Larry “Larry Lurr” Holland comparing the rivalry to Marvel’s Civil War event, asking which side other top players would take in a crew battle between the two.

If there was a civil war in Smash 4 with ZeRo and Ally leading the opposing sides who do you think each top player would side with?

Shortly after Larry’s tweet blew up, 2GGaming responded with a tweet of their own, teasing what would eventually become 2GGC Civil War.

In the ensuing months, ZeRo and Ally’s rivalry remained at the front of many Smashers’ minds as the two went back and forth, both in tournaments and on social media. Over time, other top players began taking clear sides, with speculation abound as to when the fabled Civil War Saga would be formally announced. Months passed with little word from 2GGaming. ZeRo and Ally’s rivalry had become another routine aspect of Smash Wii U. Just as the community seemed to be moving on, 2GGC: Civil War was finally announced at ZeRo Saga. As the day of the event drew closer, it was revealed that Team ZeRo vs. Team Ally wouldn’t just be a side event, but the main attraction and grand finale of the whole event.


Aftermath of War​
Now as community moves on from the aftermath of Civil War, the storyline and friendly feud has become more than just a crew battle. It’s the culmination of Smash Wii U’s most prominent rivalry, of a year worth of buildup. It also comes at a time when many tournament and event organizers agree that crew battles are getting stale, and some, such as Panda Global’s Bassem “Bear” Dahdouh, have even discussed the idea of replacing them with other side events. Now more than ever it was important to see that Civil War was treated as a grand spectacle and theme of one of the biggest Smash for Wii U events ever. In the context of the events leading up to it, Civil War crews’ significance becomes readily apparent. It’s the grand finale of an era in Smash Wii U’s history, the be all end all, the crew battle to end all crew battles. The climax of crew battles.

you are a gift to this world
Awesome article and it was all worth the hype watching.
When neither leaders won singles XD
Y'all know what comes after Civil War...
2GGC: Secret Invasion confirmed?

Everyone reveals themselves to be a Zelda main.

Afaik they're going by the movies, so Infinity War is next.

ShadesSSB said:
Afaik they're going by the movies, so Infinity War is next.
Click to expand...

Frick, I wanted a 2GGC: Avengers vs X-Men saga

Drunkle Qrow said:
Everyone reveals themselves to be a Zelda main.

Also, Zinoto and Anti....Civil War 2 perhaps?
I love melee crew battles, but I can understand people getting bored of smash4. I love both games, but tbh its a little bit slower paced and that could take forever. Just my thoughts...
You must log in or register to reply here.
Share:
Facebook Twitter Reddit WhatsApp Email Link
Top Bottom