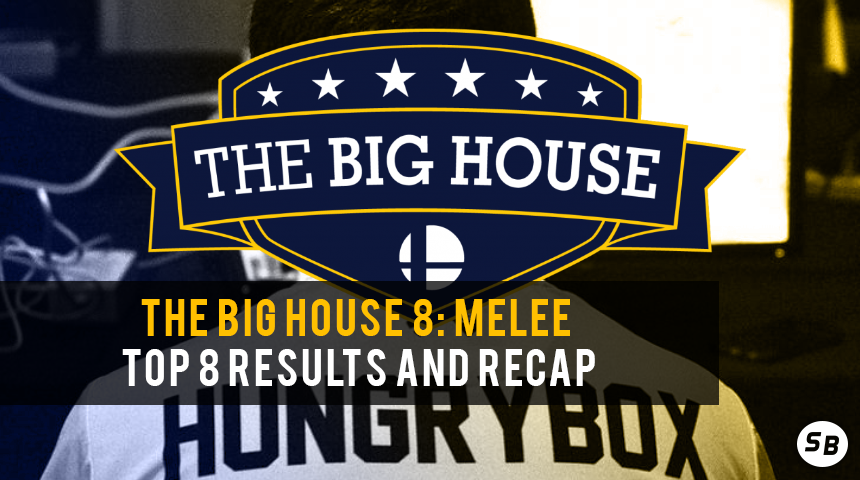 After beating Plup, HugS and Fiction to secure one of the two Summit wild card invites, Bananas faced off with Hungrybox for the first set of top 8. While the games themselves were relatively one sided, it’s hard to look at Bananas winners brackets as anything other than a massive success for the aspiring Ice Climbers. On the other side of things, Hungrybox showed a dominance in the Ice Climbers matchup that we haven’t seen since his near loss to ChuDat at Dreamhack Austin 2017.

Reasons to watch: This set really showcases how well Jigglypuff can zone out, and straight up beat, Ice Climbers’ dominant ground game. While Bananas lost the set, he also displayed a lot of interesting uses for IC’s anti-air moves. If you’re a fan of floaty matchups, or if you play either of the characters used, I highly recommend you watch this game.

Going into The Big House 8, Leffen was looking hot. With a potential argument for number #1 in the world, and a renewed passion for competition, there were a lot of reasons to bet on Leffen during this set. Mang0, however, decided to surprise everyone with an insane 3-1 victory. The set itself was filled with a lot execution tests, high-level mix ups, and Hail Mary setups from both sides. Avery "Ginger" Wilson recently did a great, in-depth analysis of the set on his stream that I highly recommend watching. Unfortunately, Leffen’s play just wasn’t on the same level as Mang0’s this set and it shows in the results.

Reasons to watch: It’s no secret that Leffen/Mang0 sets are some of the most entertaining and historic matches in the history of the game, and this set is no different. It has everything you would expect from a great Melee set, high paced gameplay, high level techniques and spacing, and combos that make Bobak’s **** harder than it’s ever been before.

While Mang0 and Leffen’s rivalry is constantly at the forefront of the Melee zeitgeist, Plup versus Leffen is an easily forgotten, but just as exciting, clash. Throughout 2017, it seemed like Plup was going maintain his dominance over Leffen, but with 2018 came the winds of change, with Leffen beating Plup at both Summit 6 and EVO 2018. Leffen and Plup’s battle at the Big House was an emotional charged, fast-paced, that Plup seemed wholly dominant during. He consistently controlled the pacing for each match, seeming both more consistent and reserved throughout. This would ultimately lead to Plup taking the set with a solid 3-1 victory. The tension after the match was palpable, as Leffen spiked his controller on the main stage.

Reasons to watch: Melee is an emotional game. From the 0-2 pot fillers, to the number one player in the world, everyone at a tournament has goals and something to prove. You would be hard pressed to find a set in 2018 that illustrates this more than this losers quarters match… except for maybe Zain vs Rishi "Rishi" Malhotra. Seriously go watch this set and that set and revel in this great game.

Fresh off of his win versus Leffen, the crowd was ready to see what Plup was going to bring to table against Zain. It was, frankly, surprising how back-and-forth sets between the two players had been since late 2017, and the reality of the situation was that this set could realistically go to either player. Zain and Plup had both lost early on at the Big House, both had dominated the competition to make it to this point, and that desire to win was apparent in both players play. Zain kept each game close, but in the end he managed to win only one game on Marth’s best counter pick, Final Destination, after losing their first game on the stage. While it was great seeing Plup perform at his true potential, many viewers that were hoping Zain would repeat his performance from Shine 2018 were disappointed.

Reasons to watch: Marth vs Sheik was long thought to be a losing matchup, but Zain brings a lot of tools to the table that other Marth’s simply don’t have. His pivot f-smashes and consistent edge-cancels open up a variety of punishes that skew the matchup in a direction most players, let alone viewers, aren’t used to seeing. Watching Zain and Plup go at each other felt just as new and exciting at The Big House 8, as it did last year. While there was a noticeable lack of nail biting sets in Big Houses Top 8, this set was one of the more exciting matches on stream.

When you think of Mang0/Plup sets, a lot of tight, insane sets come to mind. Whether you’re imagining Smash Con 2017, Shine 2018, or Genesis 5, there are any number of moments you could pick and choose from those sets that, if they went in a different direction, would have changed the entire set. This set is completely different. Plup demonstrated a level of oppression against Falco that we haven’t seen in a very, very long time. Sure, Mang0 looked great on winner’s side, but against Plup in Losers Finals, he might as well have been Bobby Big Balls or King Momo. While Plup would go onto lose, pretty decisively I might add, to Hungrybox, this set was a reminder that Plup is not getting complacent in his play. He’s getting better all the time, which is, quite honestly, terrifying.


Author’s Note: Considering these results, who do you think will win the upcoming Smash Summit? And how do you think it will affect the rankings for the end of the year? Let me know in the comments!
Last edited: Nov 1, 2018

Congrats to all who participated and congradulations to Liquid Hungrybox.

Sure it was another awesome and great tournament!
That was an awesome tournament, always love the hype that TBH brings.
Sitting here waiting for Mang0 to win one, eventually.
H Box is prime example of loyalty. He knows his character isn't the best, but he pushes forward and lets no one get in his way. Hbox serves as a example for me not to give up and push even when its tough and not everyone approves of who you play. Mad respect for everyone who played there! Congrats Hbox!!
Last edited by a moderator: Oct 13, 2018

^sudoZELDA^ said:
H Box is prime example of loyalty. He knows his character isn't the best, but he pushes forward and lets no one get in his way. Hbox serves as a example for me not to give up and push even when its tough and not everyone approves of who you play. Mad respect for everyone who played there! Congrats Hbox!!
Click to expand...

It's people like H box who make me want to pick Wii Fit back up, my first main, who I dropped for sonic because of viability

Meritocracy said:
It's people like H box who make me want to pick Wii Fit back up, my first main, who I dropped for sonic because of viability
Click to expand...

Exactly bro. Loyal Zelda here. She is bad, but my goal is to show the smash community who is boss and not let tiers stand in my way. Keep doing your thing man!
Last edited by a moderator: Oct 13, 2018
Man that was a BANANAS Tournament!
Sorry, but there was a mistake here.

Nohbl said:
Sorry, but there was a mistake here.

Don't apologize. It's much appreciated.