I always notice that players who use Lu are capable of performing a lot of stuff in the air. Can someone give me some insight on how the starter, follow ups, and juggles lead into being able to throw an opponent in the air with that Side B spike? is it only certain body weights? Percents? are there certain tilts, or something that can only lead into it? 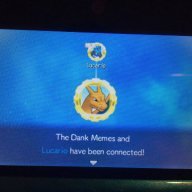 The in-air Force Palm stuff can work against any character at any percent either on its own or after any move/canceled into from an aerial. You simply have to be close enough to the character so that when the command grab of the side-b comes out, it grabs them in the air. Pretty much any moment where you can press side-b in the air in time to grab them it will work, tilts and aerials both.

Now the setups I've used to create it are fair, dair, or a read into which I just jump/fall into the opponent and side-b. Most of the time when setting up a force palm, I position myself directly above the opponent and fair and cancel that immediately into a side-b. I have found that this is guaranteed as low as 40% (even lower with heavies) and can go up to around 80%. At that point I'd experiment with dair. I rarely use dair, but I'd like to more often. If you watch IPK, this is the setup he goes to most often, I'd say you should study him to get a better grasp on that, as I don't use dair enough to truly know its exact workings. Fair is my go-to.

Basically, if you are looking to setup a side-b rather than a nair, you want to combo your opponent so that once they are offstage, you have enough time to get above them and pull off that fair cancel to side-b. There's no exact set-up, just anything that leads to these final two-moves. I have had my fair share of 0-deaths simply by approaching an opponent near the edge and doing dash attack canceled into grounded side-b grab, jump to fair above the opponent, then cancel the fair into another side-b. The final side-b should be charged into a spike.

Remember, side-b uncharged is a meteor, which is viable to kill at high percent or against opponents with bad recovers, while charged (press a after the aerial grab), will spike and guarantee. UNLESS, you are playing a good Luigi, a good Luigi can actually recover from a side-b spike if it is done while Luigi is under 40% (I know from experience, yes, this actually happened to me).

Finally, side-b is also something you just have to feel out. Sometimes I get raw side-b spike simply because a read an opponents movement offstage. Sometimes I read their jump so I jump and side-b, and they jump right into it. As you use it more, these will become instinctual. Other times, you'll be able to successfully set-up into it, and you'll just instinctual do fair-->side-b or dair-->side-b. Just keep practicing it, and the better with it you'll get.

Edit: Also, if you ever drop by a Project M Club at UC Davis event again, find me and I'll be glad to show you what I know. Just ask whoever is hosting the event if they have seen Ghost, they'll know who you are talking about.
Last edited: Dec 10, 2015
You must log in or register to reply here.
Share: Facebook Twitter Reddit WhatsApp Email Link
Top Bottom