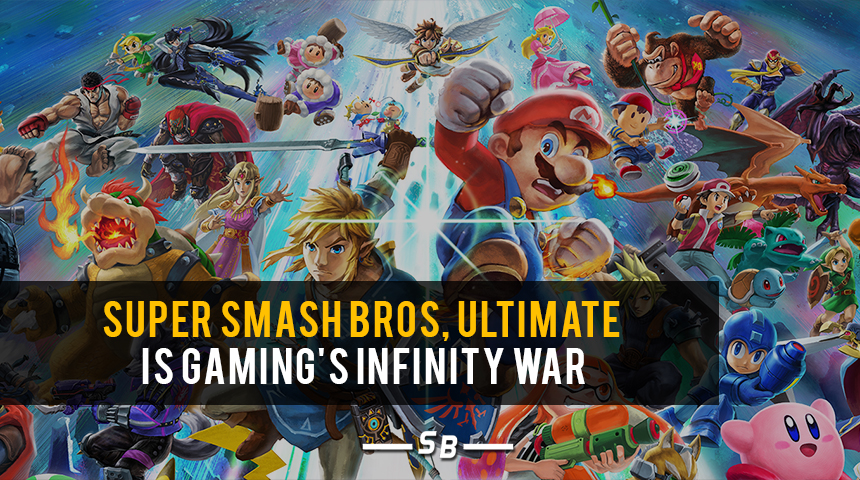 This is a revised cross-post from the original article at The Odyssey Online.

On June 12th, 2018, Nintendo revealed the highly-anticipated E3 Super Smash Bros. Ultimate to the world, coming out on December 7, 2018. Masahiro Sakurai, the director of the Super Smash Bros. series, blew expectations out of the water, breaking the internet as he revealed that 65 characters will be playable, which is uncommon in fighting games. There’s no doubt Nintendo achieved its goal of making Ulitmate gaming's equivalent of Avengers: Infinity War.

Hold on, how does a video game compare to the most popular movie of the year? Simple, by being the biggest crossover ever. Ultimate brings together gaming's most iconic characters, a couple of which go toe-to-toe with Mickey Mouse in terms of brand recognition. After all, in what other games can you play an eight-player match with legends like Mario, Pikachu, Pac-Man, Cloud, Sonic the Hedgehog, Ryu, Snake, and Mega Man? Such has been made possible by nearly two decades of building a prestigious franchise.

That's right; Super Smash Bros. has been around longer than the Marvel Cinematic Universe. The first title, called Super Smash Bros., was released in 1999. Its concept is fans play twelve of their favorite characters, like Mario, Link, Pikachu, Donkey Kong, Samus, and Kirby. The game became an instant hit, selling over five million copies and scoring a glowing reception with gamers and critics.

The following games continue to improve game play, add more iconic characters—like Bowser, Sonic, and Pac-Man—and sell more than their predecessor. Super Smash Bros. Melee sold over seven million copies while Super Smash Bros. Brawl and Super Smash Bros. for Nintendo 3DS and Wii U sold over thirteen and fourteen million respectively, making the latter two the best-selling fighting games ever. Each game continually built players’ confidence in the franchise's ability to deliver great game play with more amazing characters. All of this lead up to what Nintendo affirms is the ultimate Super Smash Bros. game.

Nintendo, not being complacent, topped even its fantastic Smash 3DS and Wii U’s offerings. Advertising itself as "The Biggest Super Smash Bros. game ever," it handsomely delivers by bringing back all sixty-three previously-playable characters from the past games. While most people expected cuts, certainly not everyone to return, Nintendo exceeded expectations by addressing the fans’ concern about characters never coming back to another game.

The two unique newcomers for this game, Inklings and Ridley, are heavily fan requested characters. Inklings star in the massive Splatoon franchise, which has sold a combined ten million copies and generated a huge fan base which allowed it to become an unprecedented success. 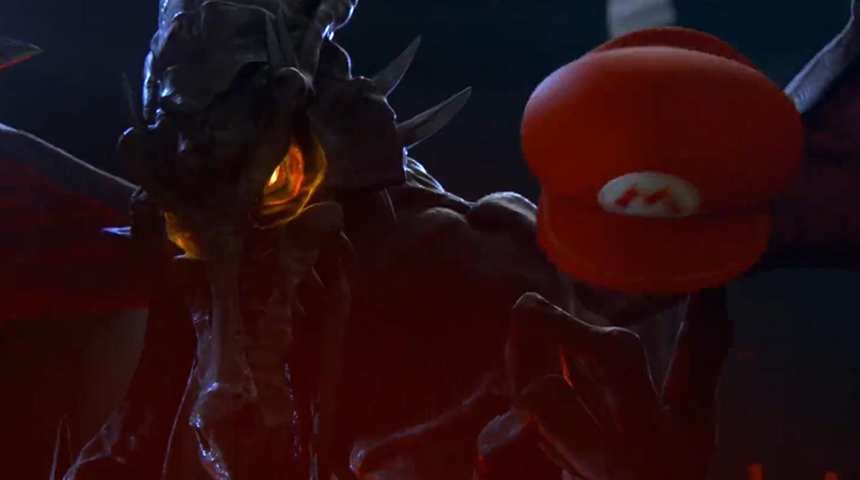 Fittingly called "The Cunning God of Death", Ridley takes out Mega Man and Mario, twirling the latter's hat to taunt his nemesis Samus Aran. ~ Image still from Nintendo's Super Smash Bros. Ultimate trailer on Ridley​
Ridley is the iconic antagonist of the Metroid franchise, his existence being the main driving force behind Samus' adventures throughout the series. Sakurai declined him a playable spot in the last two Smash game, expressing concern regarding whether or not he would work as a character. Yet Ultimate shows that, despite two previous rejections, fan demand finally got Ridley in. His inclusion, along with Snake's return and Ultimate trending on Twitter on the same day as E3, shows the incredible strength of the Super Smash Bros. series and Nintendo brand. To further show how impressive Nintendo’s marketing is, they managed to present clone-like characters in a positive light.

For those who don’t know, clones are characters who share similar move sets with other cast members. For example, Dr. Mario is on the roster in Melee, Smash 3DS and Wii U, and Ultimate but plays mostly like Mario, with only a few key differences. Ever since Melee, many fans have complained that clones prevent the inclusion of unique characters, even though the former take much less time to develop than the latter.

Subsequently, Nintendo has branded Ultimate’s clone characters as “echo fighters,” who are even more similar to their original counterparts than clones were in Melee. In fact, it’s implied that echo fighters share the exact same stats with their counterparts to the point where they occupy the same slot on the character-select screen. For example, Lucina and Dark Pit from Smash 3DS and Wii U are considered echoes of Marth and Pit, respectively. Nintendo even highlighted that Daisy will be Peach’s echo, all the while considering her a newcomer nonetheless. Fans have praised echo fighters and have actually called for more of them to be included in order to increase the number of newcomers. This positive reception is due in part to Sakurai’s new advertising approach, which frames the echo fighters as new features rather than red-headed stepchildren of original characters.

Nintendo’s marketing for Super Smash Bros. Ultimate is putting it on the path to be the best-selling fighting game ever, making both marketers’ and fans’ dreams come true.

So glad to see this posted - As a longtime gaming fan (particularly a lot of Nintendo) I couldn't agree more. Smash Bros is really a culmination of what they've been working on for the past few years.
It's not really infinity war because in this game everybody comes back instead of everybody dying
Now I want fanart of Ganondorf wielding the infinity gauntlet.

Mc.Rad said:
It's not really infinity war because in this game everybody comes back instead of everybody dying
Click to expand...

That had yet to be seen. There isn’t any indication of a story mode so perhaps we might see a mass extinction event with a follow up in Super Smash Bros. Ultimate Part 2?

I’m joking btw
It's a good thing that everyone's in, otherwise we'd all be making "Mr. Sakurai, I don't feel so good..." jokes.
By the time development's done there will be a final patch that removes half of all content at random...
Someone should make an Infinity War style poster with the Smash Bros cast. Obviously, Ganondorf with the Infinity Gauntlet. Or have Master Hand be the Gauntlet himself.
Last edited: Jul 7, 2018
So what you're saying is the Infinity Gauntlet is a Master Hand echo fighter?
A series nearly 20 years in the making for a company nearly 130 years in general.
Yup, it fits.
I am crossing my fingers that Adventure Mode comes back as one of the single-player modes in Ultimate. I enjoyed playing it back in Brawl and was by far my most favorite method for unlocking characters. Seeing how EVERYONE's coming back, we might not get Subspace 2.0, but if they prove me wrong, I will buy the game in a heartbeat.
(Granted, I'll still buy the game anyway because BoTW Link and Young Link, squeeee~)

Thirdkoopa said:
So glad to see this posted - As a longtime gaming fan (particularly a lot of Nintendo) I couldn't agree more. Smash Bros is really a culmination of what they've been working on for the past few years.
Click to expand...

Exactly. This is by far the biggest event Nintendo has ever hosted for a game, probably their most ambitious project outside maybe Breath of the Wild. How does Nintendo top this?

Aetheri said:
By the time development's done there will be a final patch that removes half of all content at random...
Click to expand...

No, half of the world.

But seriously, I would love a good story mode. I would never ask for anything ever again if that happens.
Infinity War + Smash Ultimate = TOO DAMN MUCH FOR THE WORLD TO ****INH G HANDLE IN THE SAME YEAR
Ganondorf in his quest for the Power Glove
People don’t want clones because they changed the name, people want clones because they are desperate for new characters since we aren’t getting as many characters in this installment.
Marvel we have the biggest crossover, in history, Nintendo hold my beer. Anyway besides, the frantic pace, and gameplay faster speed, increased knock back I think the main selling point is the everyone is here line. It's the biggest Smash in history Super Smash Bros. is Nintendo's infinity war. Gaming's for sure.

Mc.Rad said:
It's not really infinity war because in this game everybody comes back instead of everybody dying
Click to expand...

Clearly this is the sequel to Infinity War.
Something tells me none here has heard of Super Robot Taisen-games... 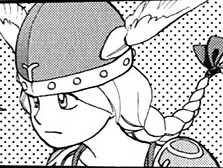 Though I think that's more on the anime-side instead of gaming, specifically for mecha anime - so I digress.
Well, I guess about half the roster's gonna get erased when the next Smash after Smash Ultimate gets announced and like after watching Avengers: Infinity War, it's gonna make me sad as hell.
Can't wait for Crazy Hand to throw someone off a cliff in the name of love.
The Dark Souls of Smash
More like Infinity War is cinema's Smash Bros.

Or not, because Infinity War isn't really a crossover at all. Marvel has been a shared universe since the comics began.
Last edited: Jul 8, 2018

A costume maybe even with gold and blue armor like thanos :D
Ugh... I wish Toad and Meowth could participate in gaming's Infinity War.

Squidward confirmed.
Considering this well be the biggest character roaster in the entire franchise Id say it really compares to Infinity war.
I see Master Hand has the Thanos has he controls all the smashers in the world.

Mrplutoguy112 said:
Considering this well be the biggest character roaster in the entire franchise Id say it really compares to Infinity war.
I see Master Hand has the Thanos has he controls all the smashers in the world.

Honestly, I'd say it even surpasses it given that it has iconic characters from five different third-parties in addition to Nintendo.
Shigesato Itoi is so cool he gets to have his name between the other legendary companies, he's the true winner of this Infinity War.

I'd love to see Master Hand wearing the gauntlet as an outfit.

CardiganBoy said:
Shigesato Itoi is so cool he gets to have his name between the other legendary companies, he's the true winner of this Infinity War.
Click to expand...

Ikr! Itoi is a legend by all means and I love the mother series and he's really talented designer.

Fuzzy Pickles! said:
Honestly, I'd say it even surpasses it given that it has iconic characters from five different third-parties in addition to Nintendo.
Click to expand...

Its quite amazing how Nintendo does there characters to be so Iconic.
Btw FUZZY PICKLES!

GreenKirby said:
Can't wait for Crazy Hand to throw someone off a cliff in the name of love.
Click to expand...

In terms of this being the “most ambitious crossover” though, I’d definitely say it tops IW for that title. I mean we even have a third party AT from a series not represented by a playable fighter in Smash (which is in this case Bomberman)!
Last edited: Jul 12, 2018
Game play: A. Smash has an edge because it literally invented a genre of games called "brawlers" of which it still undeniably owns the market for. It was innovative and still remains unique for game play. It has loads of modes and types of game play and is worth many tens of hours, sometimes hundreds, of gaming. It can be played casually or competitively and the skill ceiling is high enough to have a tournament following. It is hard to discount the successes of this series in terms of the gaming experience.
Super Smash Bros
Infinity War
Last edited: Apr 2, 2020
You must log in or register to reply here.
Share:
Facebook Twitter Reddit WhatsApp Email Link
Top Bottom