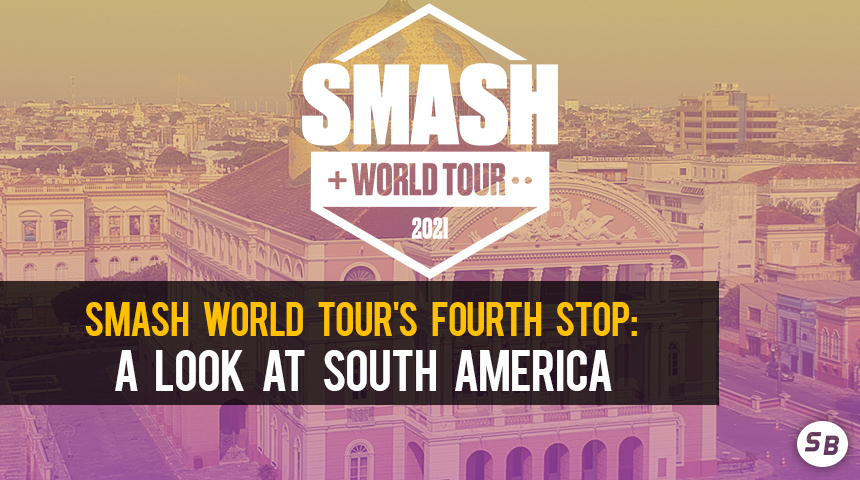 After one month, Super Smash Bros. Ultimate has entered its fourth phase of the Smash World Tour. One week after Central America was featured, South America has now entered the discussion. Unlike Central America, which fights Mexico for 6 slots at the December finals, at least one South American is assured a December spot after the 16 qualifiers from this event compete offline.

South America is a large continent, with potential sets reaching lengths that stretch beyond the distance of the West & East Coast of the United States. This was the subject of some controversy, leading to an unorthodox seeding method being used to avoid high lag sets dominating the bracket.

While most remember Chile’s impact on Smash coming from now-banned former professional Gonalzo “Zero” Barrios, Chile has been relevant in ways many spectators have missed. This goes at least as far back as the mid-2010s, when “Himura” and Franciso “Dragon” Solano performed well at Smash Factor 4, as well as varied performances from “Harlonga” and Jean “CruxisPhantom” Urbina.

The Chilean scene has developed since the early 2010s, and is now better positioned than ever to make a deep, broad impact on the global scene. As recently as GENESIS 7, we saw “Rody” Olivaries put up a good number of regional wins despite being ranked outside of the top 10 in Chile.

This extreme presence can be seen in Winners Top 32, where at least one Chilean player exists in every qualifier set. Because sixteen players move on to the offline regional finals - twelve of those in the initial bracket, 4 in the last chance qualifier - each first winners set is a qualifier set.

Julián “Frido” Bastías, Chile’s best player and South America’s best active player - as well as one of the best Game & Watch players worldwide, will face off against top 2 Brazillian Inkling “Luffyranha”, himself a formidable opponent from one of South America’s stronger regions.

Argentina, like Brazil, is among the strongest areas in South America. Santiago “ZanT” Aguilar and Facundo “Escurridizo” Fernandez each face off against Chilean players “OZN~Tales” and Kenneth “Keen” Hanss.

ZanT is Argentina’s best player and the best Pokemon Trainer remaining in the bracket. His opponent, OZN~Tales, is a long time veteran who recently has made waves in the Thunder Series with Min Min, as well as a top 8 placement as South American Wifi event White Phoenix.

Escurridizo is widely considered South America’s best Pikachu player. He is ranked 2nd in Argentina, while his opponent, Keen, is a similarly formidable Wolf player with offline event wins in Chile. While most sets in the winners side of top 32 will be worth watching, this is one of the most potentially explosive ones.

Jorge “Toon” Farias is an unranked wifi player. At only 14, he’s one of Chile’s fastest upcoming players, and likely the country’s best Ness player. He is set to face off against Brazil’s rank 9, “RevoS”, one of many top Sonic players from South America, and Brazil’s best.

Julio “Anality” Morla is Ecuador’s best player. Having won dozens of wifi events and notably placing 2nd at White Phoenix, he is a serious contender to win the event, and one of the best active Terry mains in the world. He’s set to play against “Wise”, Chile’s best Luigi and the best player in the subregion of Maule. The distance between the two is over 2300 miles, emphasizing the size of the continent.

A similar story plays out with Bruno “Br1 AV” Assemany and Javier “LinkEa” Gonzales - Ecuador to central Chile. LinkEa is a top player from Chile that currently isn’t ranked due to sporadic activity, but he is a formidable enough player to win Royalty 2, one of Chile’s more notable national events.

While LinkEa is possibly the best Link in South America, Br1 AV is a solid contender for best Snake on the continent. He is more well known among North American players, having been ranked as high as 21st on the Wifi Warrior Rankings v4.

Colombia finally gets a mention with “Ghoul979”, an Ike player, facing off against Chilean Young Link player “Ran”. A coinflip set, Ran is an unranked player with a decent depth of wins against fellow Chileans, while Ghoul979 is a less prolific but still strong player who has defeated some of Colombia’s best talent.

Alejandro “Poyo” Incháustegui is a long-time Peruvian Sonic player. Noted for an impressive run at Smash Factor 7 in Super Smash Bros. for Wii U, he’s since taken Griffin “Fatality” Miller to game 5 and generally is considered a potential favorite to go far at this event, having won Thunder Series 5 and having placed 3rd at White Phoenix.

He will face off against Chrom and Roy player “Castle”, who got here by defeating Brandon “Lord” Alvarado. Poyo is likely favored, but Castle’s run thus far has been strong.

This event was, to put it lightly, stacked. Between that and the unorthodox nature of the seeding, the resulting upsets were the largest seen at any Smash World Tour qualifier thus far. Over 500 attendees have been cut to 32, and many good players found themselves in difficult brackets. This resulted in no players from Uruguay, Paraguay, or Bolivia making it.

Venezuela, however, did make it in through one player - Gabriel “GARU” Rivero. Ranked 2nd in Venezuela, he’s part of one of the stronger hidden boss regions in South America, and likely the best Falco on the continent. He faces off against Colombian Samus “jjcat00”, a Wifi warrior with impressive performances under his belt.

Jorge “STARLEE” Calvo is Peru’s top ranked player remaining in bracket, considered 2nd best, only behind “Axel-4J”. After an early loss to Ghoul979, he’s set to face off against “Peppa”, a top Chilean Mario player.

Francisco “Paco” Huidobro has quickly become one of Argentina’s top threats. Having won the offline Back 2 the Stage series a month ago, he is generally considered the best Ridley in South America. He’s set to fight “Lukitu”, a Brazillian Palutena currently ranked 10th in-region.

Finally, we hit one of the highest stakes losers sets - Paulo “Player 7” Ferreira vs. Danniel “Dannckles” Ogava. Player 7 is Brazil’s best player and a top Game & Watch who had a close set with ZanT. Dannckles, despite being ranked 30th offline, is one of Brazil’s current best wifi players, and likely the best Wii Fit Trainer on the continent.

South America has long been an underestimated area in Smash, but this December, one of today’s noted players will make it into a global finals, giving them an opportunity to make upsets on a global stage and take what they learn home. As things stand, it seems like this is just the beginning for South America.


Resources & Where to Watch