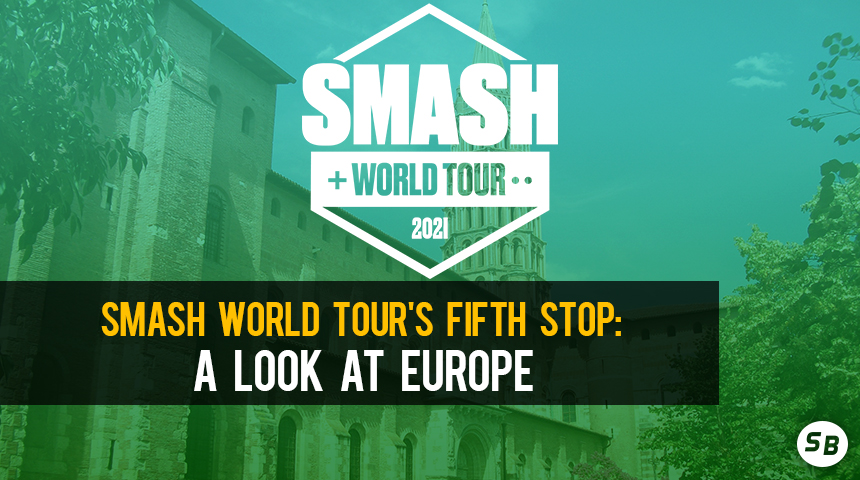 Europe is one of the Super Smash Bros. Ultimate’s largest scenes. Comprising dozens of countries, the top countries of the continent are largely in Western, Southern, and Northern Europe.

Now, after one month, the Smash World Tour will send sixteen people from a near-2000 person online qualifier that stretches from the distant Iceland to Ukraine, to an offline qualifier this summer. Six of those players will attend the December finals.

As it stands, there are 32 players remaining after a deeply chaotic day. Today, we’ll examine things.

Europe has exploded in Smash Ultimate, having hosted multiple offline majors starting in 2019. The biggest of which, Albion 4, was the swan song for the United Kingdom national event series. It featured nearly 1000 players, and was won by William “Glutonny” Belaïd- a top player with over a decade of competitive experience. He is widely agreed to be Europe’s best player.

Glutonny, a French player, represents a region that as of Smash Ultimate has become Europe’s best. As of the Pre-Quarantine period, France is ranked 10th worldwide, and was ranked 5th during the complete 2019 season.

In contrast, the event’s second seed - Dark Samus main Pau “Sisqui” Paire - is unranked on either the official European Smash Rankings or OrionRank Europe. Hailing from Spain, he made significant offline progress just before the Covid-19 Pandemic shut offline events down, having placed second at Spanish event Tizona.

Since then, he’s won 22 out of 36 online events he has attended. Many are smaller regional events, but he’s also won sizable events like EnvySnakes Crew Collab Edition and FCW x GlobalChan: Special Edition #1.

Some of this can be owed to the fact that Spain has a substantial online talent base, but Europe in general has managed to procure a large number of incredibly powerful Wifi Warriors. Due to the distance between the most active wifi events in North America and region locks, Europe is under-represented on the Wifi Warrior Rankings, causing certain players to fly under the radar.

Out of the 85 players represented between both European rankings, 38 attended, but only 11 are present in the Smash World Tour’s top 32. Some of this can admittedly be owed to a lengthy DQ list that included Marcel “quik” Romagnuolo, Alain “Space” Balemba, and Kevin “Rage” B. - among others - but that’s still a large number of top continental players who missed the top 32.

The most interesting piece of data is probably the fact that none of Spain’s Europe-wide ranked players attended this event, yet Spain’s share of the top 32 - 9.4% - is still above their share of a combined ranking presence.

When splitting the percentages based on the 38/85 Europe-wide ranked attendees, we get this interesting data set:

It’s worth noting that many of the players in the top 32 are not the ones represented among the 38 ranked attendees. For instance, Piero “firstbones” Primossi is one of the 38 who did not make the top 32, but Italy still slipped in via Robin main “Shuan”. He sits in losers bracket.

As it stands, half the countries represented performed at parity, two underperformed, two overperformed.

After all the sets that were played, we’re left with just eight countries. In the Winner’s side Top 32, stakes are similar to other single region events - sixteen players qualify, with four of those doing so through a last chance qualifier. This means every Winner’s Round 1 set tomorrow will determine qualified players.

Glutonny will face off against “Vidad,” a Spanish R.O.B. main. While it’s possible Vidad will make an upset, as he’s competitive among other Spanish Wifi Warriors, Glutonny is favored to win and punch his ticket to the Offline qualifier.

The next set is between French players “Noxumbra” and Cedric “Homika” C. The former is a recent upstart Richter main that has gotten a scattered number of wins and solid placements at recent online European events, while the latter is one of the best active Rosalina players in Smash Ultimate and one of France’s current best active players, ranked 10th in Europe.

Homika is favored based on his recent victories at WANTED Online and Kayane Cup, but French depth has proven to be bracket breaking on past occasions.

The next set is another French-only one, this time featuring online-exclusive players. “Neibaf,” a Steve main, will face off against “Freetox_,” a Min Min player. Both players are piloting post-Quarantine characters and have no offline events recorded on smashdata.gg, making this a set that will shape the post-Online era.

Next is upcoming French Snake player Velentin “Tomberry” B. facing off against UK Wifi Warrior and Bayonetta player Oliver “Bloom4eva” Alexander. Tomberry made strides in the French scene during Quarantine, attending and often winning the few number of locals held in the scene.

Bloom4Eva has long been a wifi-oriented hidden boss player from the United Kingdom, and is prolific enough to have made the WWRv6 at 33rd. With frequent wifi event wins and a lengthy set record that tracks from Europe to South America, he is favored, though match-up dynamics could make this a long fight.

Sisqui, the aforementioned second seed, is Spain’s best player left in bracket and highly decorated online. While favored to win, his opponent, “Tarik” Fayazi, is one of Europe’s best Greninja players and was one of Europe’s best out-of-country performers in the pre-Pandemic era. This is almost certainly the highlight set of Winner’s Round 1.

“iRefise”, a Swedish Steve player that emerged in late November of 2020, will compete against German G&W player “Ady”. Another unexpected matchup, iRefuse once again may represent a part of what the post-Online metagame will look like, while Ady rarely attends events and appears to be a hidden boss from Germany residing in the country’s Eastern region.

Sillintor, ranked 6th on the Summer edition of Germany’s 2019 rankings, is likely favored based on his brief but solid tournament records. Rinor, formerly a Roy and Chrom main, seems to prefer Min Min. Despite both hailing from Germany, the two have not yet faced off in bracket in Ultimate.

Lastly, we have “PurpleDebo” vs. Andrés “AndresFN” Fariñas. PurpleDebo is the Netherland’s best Pac-Man main, and has performed well offline at a few events, mostly notably at European major Syndicate 2019.

AndresFN is the last of the three Spanish players to make the top 32. Primarily using Ken (supplemented by Ryu and Terry,) he has competitive records against both sisqui and Vidad, and was on a clear upwards trajectory before the quarantine hit. However, he has a losing record to Debo - standing at 0-2.

This fact makes a set that otherwise would be favorable for AndresFN an immediate contender for a high stakes, five game set.

Past the Winners Side of Top 32, you have a shark pit of a loser’s bracket. While 11 players ranked in Europe made it to the top 32, the majority of those made it through the losers bracket, most notably Ramin “Mr. R” Delshad, a long decorated competitive Smash player. He uses a variety of characters, but has largely opted for Chrom and Snake.

All of these players have been ranked between the two most significant European Rankings. Most are favored in their upcoming sets, though technical United Kingdom R.O.B. main “Lucretio” could present a roadblock for Longo.

Swedish Mii Gunner Elias “Taoudi” (entered as ඞ) has performed well, so he may also be unexpectedly competitive against iStudying. Additionally, German Bowser Jr. player Mertcan “Snormanda” İrdem versus TriM will likely be a close set, though it will not be streamed by VGBootCamp.

Finally, we have Johannes “Sintro” Teufl. Ranked 2nd in Austria, he will face off against top French Ridley “Mezcaul”.

Europe’s size as a continent has presented challenges for the Smash World Tour’s online driven qualifiers. Between the different metagame and heavy presence of new players or wifi only players, we’re going to witness an exceptionally bizarre Top 32 where many of the qualified players will be entirely new to viewers.

It promises to be interesting, but the state of online has continued to draw criticism from players. This was the largest qualifier yet, over three times the size of last week’s highly contested South American Qualifiers, and next week will likely present the largest bracket to date with the Japanese qualifiers.

Resources & Where to Watch