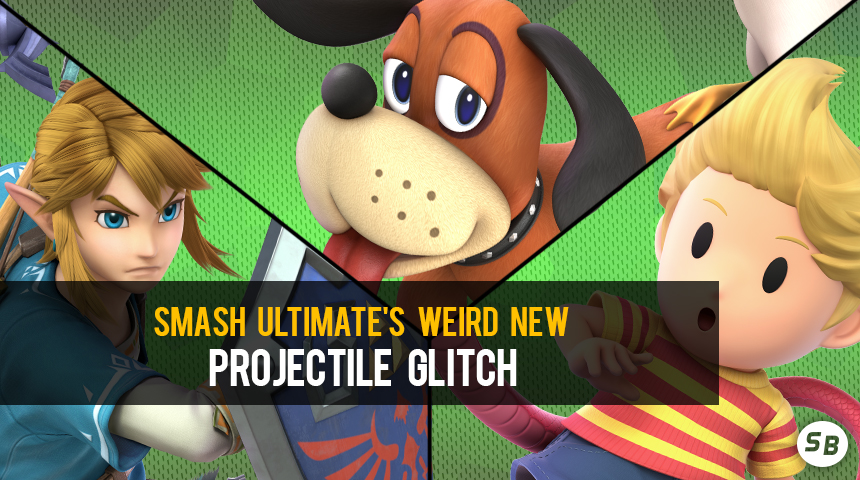 There’s something peculiar about Super Smash Bros. Ultimate’s Ver. 11.0.0 patch that wasn’t listed in the official notes. Projectiles now have a chance of going through character heads without harming them at all.

new bug in 11.0: projectiles sometimes completely ignore specifically head hurtboxes when moving forward (or going from dash to run, im not sure)
i first saw this with byleth's arrow and jigglypuff's head, but it seems to affect any projectile in the game pic.twitter.com/fMVobjX5Sw

Twitter user “angie” tweeted a video showcasing the glitch. In this tweet she noted that projectiles have a chance to bypass hurtboxes on character heads. It’s currently unknown what exactly triggers this glitch. However, it seems to be related to when characters are running and facing the projectile.

Understandably, people are curious as to why this strange happening occurs. There’s quite a few possibilities as to what’s going on behind the scenes here. The first possibility is that this was an intentional change. The developers may have wanted to add a small chance for projectiles to miss head hurtboxes for whatever reason, and it isn’t exactly uncommon for fighting games to go through many small tweaks.

Another possibility is that it’s a mechanic accidentally added earlier than planned given the lack of any announcement for it. Many people have compared it to Grazing, a mechanic used in many Bullet Hell games, perhaps most notably the Touhou Project series. Some have suggested that this might be a sign that a future Smash character is from a game that uses said mechanic.

Thirdly, there’s a possibility this is related to Duck Hunt. Duck Hunt recently received shadow changes, which are changes that aren’t noted in the official changelist.

These shadow changes caused them to lose the Reticle Duplication technique and the ability to use a downed gunman to prevent themselves from being grabbed. This isn’t the only time Duck Hunt’s obtained shadow changes though. In the Ver. 3.0.0 update, Duck Hunt lost a glitch that made it possible for Wild Gunman’s projectile to pass through characters. Sounds pretty similar to the current glitch, doesn't it? Coincidence? Perhaps, but it’s definitely interesting that we get a new glitch closely resembling an old one involving Wild Gunman the moment the move got patched again.

Of course though, it could also be unrelated to all of these options and be the fault of something else. The possibilities are endless!

Author’s Note: I was really curious, so I tried recreating the glitch myself by running into Link’s arrow like 100 times. Unfortunately though, I couldn’t find any difference between the times a projectile would go through my character and when they didn’t. It’s been fun thinking about what on earth causes this though, so I don’t regret that at all! Personally, I think it’s related to the Duck Hunt changes. What do you think though? Please let us know in the comments below!

To me it wouldn't make sense to have a projectile just straight up ignore a characters hurtbox like this. Things like the mechanic introduced in brawl where if just the tip of a move touched a character it did no damage and just made a tiny "clip" sound effect and animation, that made sense. But this? This has a move literally go completely through a characters skull and do nothing. To me that makes zero sense at all. It's also why I can't see it being party of some unreleased mechanic.

Perhaps the shadow change was just that nintendo changed the hitbox size of certain projectiles a little to much, or the hurtbox size of certain characters heads. OR it could be something glitching out due to these characters like lucas having certain moves where their heads are invincible anyway. Mario, Lucas, luigi, and a few others iirc all have this trait when they use something like their up smash or uair.

Regardless I don't think they was some sort of intended mechanic as again, it makes absolutely zero sense for the projectile to go clean through the center of a characters head and still do no damage.
Interesting. Maybe we'll see a minor software update that will fix that oversight? I can't really see how this is intentional.
Phantom projectiles, huh? Will be interesting to see how the competitive community reacts to this, as I assume it will take a few weeks at most for this to get patched.
I wouldn't be surprised if this "glitch" were related to something new that is not yet fully implemented/released -- code that accidentally got mixed in and overlooked. It's hard to think why a glitch like this would otherwise just crop up out of nowhere.

I'm pretty sure this glitch - if it is entirely unintended - will be patched out fairly soon.
Okay, considering new glitches primarily show up because of the Future DLC having something new. Remember, a Projectile Glitch happened with Sephiroth and Pokemon Trainer last patch and Pyra and Mythra were a Stance Change Fighter. Visual Glitch with Bayo led into Min Min, same with a Turnip related Visual Glitch on Daisy leading to Steve's Mining. Or how Mii Swordfighter and Duck Hunt were both had some stuff used for Hero and Banjo, with Menu and Banjo's General Animation Style, so I could see this going towards someone like Reimu, whose games are based around barely avoiding Projectiles, thus potentially leading to her having a Projectile Grazing Mechanic. We'll just have to wait and see.
Last edited: Mar 8, 2021
Not to mention this glitch with Dark Pit that's been found.

THE 6r said:
Not to mention this glitch with Dark Pit that's been found.

lol thats pretty funny. Maybe he's making a fashion statement to stand out in this new patch.
Didn't we have an existing character glitch in the past that hinted at a newcomer would have that mechanic later down the line and we actually got a DLC character like that? I can't remember who it was... but maybe that means that this glitch made its way in while being used to develop another future character? I can only think of one reason why they would develop a system where the arrows would go through hitboxes...? A certain character with no limbs, you might say.

mariofan48 said:
Didn't we have an existing character glitch in the past that hinted at a newcomer would have that mechanic later down the line and we actually got a DLC character like that? I can't remember who it was... but maybe that means that this glitch made its way in while being used to develop another future character? I can only think of one reason why they would develop a system where the arrows would go through hitboxes...? A certain character with no limbs, you might say.
Click to expand...

Yeah, all of them.
Are there more projectiles and heads than just Link's and Lucas's, respectively?
Honestly, it would be kinda nice if this was intentional, since projectiles are a little too strong in Ultimate. But it seems unintentional, so I don't expect it to stay.
With all these new glitches, I think we're due for a Bethesda character.
You must log in or register to reply here.
Share:
Facebook Twitter Reddit WhatsApp Email Link
Top Bottom