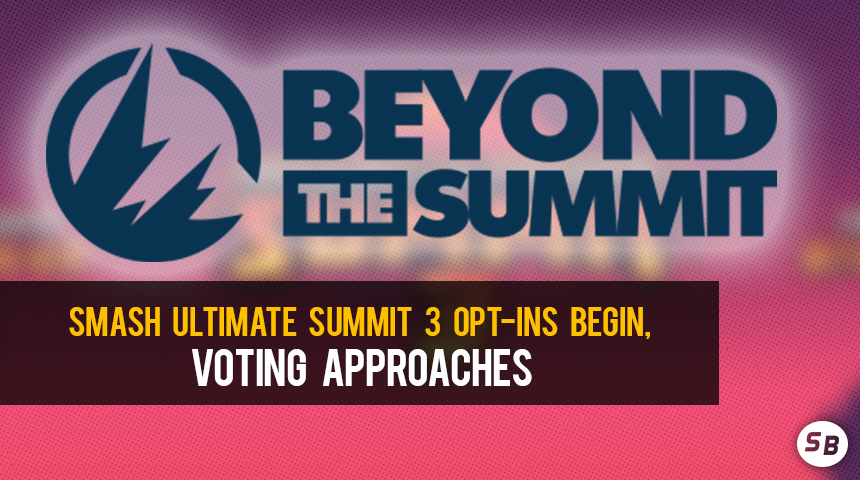 Smash Ultimate Summit 3 is almost here and has opened up opt-ins for voting today!

As the name suggests, Smash Ultimate Summit 3 is the 3rd Beyond The Summit invitational for Super Smash Bros. Ultimate. As usual, some players get invited, some qualify at events and some get in by obtaining enough votes during a voting phase. Currently, only the voting phase isn’t finished yet, and all eligible players can now opt-in for nominations. For a player to be eligible, they need to be a resident of Canada, Mexico or the United States because of current travel restrictions. They also need to have done at least one of these things:
If a player is eligible and has opted in, the next thing they need to pay attention to is the Twitter nominations. On August 3rd, 2021, Twitter users will be able to nominate any player who opted in, and the top 20 most voted players will advance onto the next phase on August 6th, 2021. In the final voting phase, the 3 least voted candidates will be dropped on August 9th, 2021, and then the next 3 on the 10th. On August 12th and the 14th, the current top 2 will be invited, while the next lowest 3 get dropped. Finally, on August 16th, the roster will be decided as the top 2 yet again get invited and the final bottom 2 get dropped. The 6 players who get invited from the voting phase will then attend Smash Ultimate Summit 3 and will join the players who already were invited and/or qualified. These players are:
Smash Ultimate Summit 3 will begin on August 26th, 2021, run till August 29th, 2021, and can be viewed at Twitch.tv/btssmash.

Author’s Note: Personally, I'm pretty excited for Smash Ultimate Summit 3! How about you? Please let us know in the comments below!