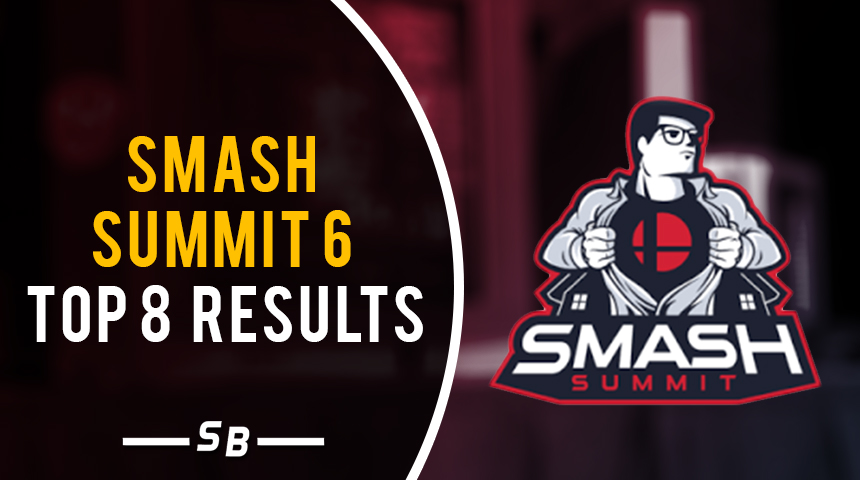 Beyond the Summit returned to present one of Super Smash Bros. Melee’s most anticipated events, Smash Summit 6. With a multitude of brackets, and the biggest names in Melee, Summit 6 proved to be another great iteration of the bi-yearly event. Yet, the point that created the most waves was Singles, where the level of play lifted itself into new heights. Plenty of upsets occurred, and the results were unlike anything before it. Here, we will look over the Top 8 finishers of bracket, and see the journeys they took throughout the weekend.


Taking his first Summit Championship was MVG’s/Echo Fox’s Jason “Mew2King” Zimmerman. Mew2King, one of Melee’s most well known and prolific contenders, was the top of the game in 2007. His surgical neutral and terrifying punishes were unrivaled at the time, and earned him the title King of Smash. It’s been over a decade since then, and many changes have happened. The rise of the Melee gods and godslayers has been a narrative dream for the game, and Mew2King has been a powerful factor in most of it. Yet, he made history at Smash Summit 6, as he took his first ever win for a super-major tournament. It was a difficult journey throughout, but Mew2King managed to take some impressive wins throughout. In pools, he defeated Zain(3-2) and Wizzrobe(3-2) in two close sets. Yet, he lost to Plup, who was the only player to achieve the feat(1-3). This put him in the Upper Bracket on Sunday, where he had an impressive streak of victories. His run consisted of Armada(3-1), Leffen(3-1), Zain(3-1), and Armada once again(3-1) to close out his victory. Mew2King has shown his capability to win super-majors in the past, but he has finally taken that step with Smash Summit 6. It was such a surprise, that even Mew2King showed shock at the outcome. With this victory under his belt, his drive may change in the future, and we may see his career take an interesting turn.


Coming in second place was Alliance’s Adam “Armada” Lindgren. Armada had a dominating run from 2015 through the first half of 2017. If Armada’s name was in the attendee list, it was a fair guess to say that he was going to win the tournament. Yet, the rise of Hungrybox in the later half of 2017 introduced some problems for him. His attendance in North American tournaments has waned since Genesis 5, and anticipation built for his next big tournament appearance. Armada did not disappoint. In pools, he had convincing victories over HugS(3-0) and Axe(3-0), and a close loss against Mang0(2-3). This put him in Upper Bracket, where he met with some initial trouble. His first match was against Mew2King, which resulted in an early drop to Lower Bracket(1-3). Yet, Armada had only begun his run. He ended up going from there to Grand Finals, with an amazing run through SFAT(3-0), aMSa(3-1), Plup(3-0), a close set against Hungrybox(3-2), and Lower Finals against Zain(3-1). From there, he earned one more shot at Mew2King. Unfortunate for him, Armada was not able to overcome this obstacle, and ended up at second place(1-3). Though not as dominating as his past performances, Armada has shown that his time off from the tournament circuit was not wasted time. Given time, there is a chance that he may return to his old position at the top of the stack, and contenders can’t write him off as a falling star yet.


Coming in third place was Panda Global’s Zain Naghmi. Zain has been running towards the top since 2015, and his 2018 saw a decent amount of Top 8 finishes. But Smash Summit 6 was where Zain pushed into a whole new level. He earned the highest placing ever for a vote-in player, and did so by outplacing nine players that were placed higher on SSBMRank 2017. Zain’s journey through bracket started with a strong performance in pools, where he defeated Ginger(3-0) and SFAT(3-1), and had a close loss against Mew2King(2-3), which earned him a spot in Upper Bracket. From there, he had an incredible run, earning two high profile upsets against Mang0(3-2) and Plup(3-2). Yet, he met with the two biggest hurdles of bracket. In Upper Finals, he was defeated by Mew2King(1-3), which put him in Lower Finals and in the path of his other loss, Armada(1-3). Zain was likely to make an upset or two at a major, but Summit may have been a huge catalyst for him. The time spent practicing and growing among Melee’s best may just have turned him from a Top 8 threat to a Top 8 regular, and Zain is not likely to let that slip any time soon.


Coming in fourth was Liquid’s Juan “Hungrybox” Debiedma. Having won the last Smash Summit, and being the highest ranked player, many thought that Hungrybox was a shoe-in for Grand Finals. Yet, several curveballs managed to make his journey more difficult, and resulted in his lowest ranking since Super Smash Con 2017 in August. Yet, this wouldn’t be a reason to believe that he was slipping. Rather, Hungrybox faced a difficult run throughout the tournament, and had quite a few hurdles to defeat. In pools, he defeated 2saint(3-1), but lost to his long time rival Mang0(2-3) and suffered a dark horse loss to aMSa(2-3). This put him in Lower Bracket on Sunday, where he earned some impressive victories. He made quick work of Ginger(3-0) and Axe(3-0), before he got a chance to face Mang0 once again. This time, Hungrybox emerged victorious in a convincing set(3-1). He then had a long, close victory over another rival, Leffen(3-2), in order to earn a shot at Armada in Lower Semi-Finals. Yet, after another close set, Hungrybox was defeated(2-3). While the placing may lead some to believe that Hungrybox could be slipping, he has come back from much more difficult losses. His first place ranking is not just for show, and we may be shown that with his next appearance.


Coming out as one of the fifth place finishers was Panda Global’s/Red Bull’s Justin “Plup” McGrath. In 2017, Plup started pushing through his image as the gatekeeper of Melee, which culminated in an explosive first place finish at Genesis 5. Since then, he’s been keeping pace, with Hungrybox continuing to be his biggest obstacle. At Smash Summit 6, he had to face a number of contenders he hadn’t seen in months, and they had been growing since then. In pools, he defeated Ginger(3-0) and Mew2King(3-1), but lost to Leffen(1-3). With a slot in Upper Bracket, Plup began his journey with a quick victory over Axe(3-0), but fell to Zain in a nailbiter of a set(2-3). Unfortunately for him, Lower Quarters put him up against Armada, who had been improving since Genesis 5, and he was eliminated(0-3). Plup may have been a potential winner of Summit 6, but the rising tide of competition proved to be a bit much for Plup. Still, his performance was impressive, and likely to spurn him further on over these next few months.


Coming out as the other fifth place finisher was Red Bull’s/Team SoloMid’s William “Leffen” Hjelte. Throughout 2018, Leffen has been a regular Top 8 finisher, and his presence in bracket is a threat to anybody he faces. At Smash Summit 6, he had an incredibly strong start in pools, where he defeated Westballz(3-0), SFAT(3-0), and Plup(3-1). This earned him a spot in Upper Bracket, and he was poised to make a serious run. In Round 1, he handily beat aMSa(3-0) and made it to Top 8. Yet, he was placed against two giant roadblocks, when he met and fell to Mew2King(1-3) and Hungrybox(2-3) in succession. While it was a bit anticlimactic, Leffen had a spectacular performance, and he will be returning to Summit soon, as he is one of the invited players for Summit of Power. Melee fans may be interested to see one of Melee’s finest perform among Dragonball Fighterz finest, so keep an eye on that.


Coming out as one of the seventh place finishers was Cloud9’s Joseph “Mang0” Marquez. Always a crowd pleaser, Mang0 is still showing himself to be a player worth fearing in bracket. Though he has had some shakey results over the past year, Mang0 is considered by many to be a true threat to anybody in bracket. For Smash Summit 6, Mang0 made an interesting move. He only played as Falco throughout the main bracket. Though his Fox was a staple part of his play, his performance showed that the move was not just a whim. In pools, he defeated n0ne(3-0), Hungrybox(3-2), and Armada(3-2) earning him a slot in Upper Bracket. Yet, the level of competition was a bit high for Mang0 that day. In Round 1, he fell to Zain(2-3), and had to continue in Lower Bracket. There, he defeated Wizzrobe(3-0) and qualified for Top 8, where he had to face Hungrybox once again. Though he defeated him earlier, Mang0 wasn’t able to pull ahead on his second go, and was eliminated from the tournament(1-3). Though his placing was lower than expected, Mang0’s character choice may be a sign of shifts in future brackets. If Mang0 decides to use Falco more often, it will certainly change the dynamics at high level.


Coming out as the other seventh place finisher was VGBootcamp’s Masaya “aMSa” Chikamoto. The prominent Yoshi player, aMSa has had a good number of North American appearances over the past year, and he has been a Top 8 threat for most of them. The level of technicality he displays has been both a bracket nightmare, and a crowd favorite. At Smash Summit 6, he had to face one of the deepest talent pools once again to prove himself. In pools, Axe proved to be an obstacle for him(1-3), but he brought out impressive victories against HugS(3-1) and Hungrybox(3-2) to earn a spot in Upper Bracket. Yet, his journey proved to be a rough one, as he fell to Leffen in Round 1(0-3). From Lower Bracket, he earned a close victory against n0ne(3-2) to qualify for Top 8. There, he was defeated by Armada(1-3), and was eliminated from bracket. While seventh was lower than what aMSa was hoping for, his performance was quite a shocker. He managed to take his first game off of Armada, and outright beat Hungrybox. His current trajectory is something to look forward to, and he may surprise us again in the future.


Summit could be said to be a strong barometer of Melee’s future. If this is true, then the end result of Singles Bracket could be a powerful message of what is to come. The rise of Zain might be an exciting development for Top 8 brackets throughout 2018. The first super-major victory of Mew2King may ignite a new flame within the King of Smash. The continual improvement of aMSa could be a continual dark horse. We will have to see what the next months hold, and if these threads create a new tapestry of high-level Melee.
Last edited: May 8, 2018

"Mew2King.exe has stopped working". The gist of his own reaction to winning summit, and it fits him strangely well. Congrats to him winning the event.
Last edited: May 9, 2018
You must log in or register to reply here.
Share:
Facebook Twitter Reddit WhatsApp Email Link
Top Bottom