Smack Studio - Make your own dream characters and stages 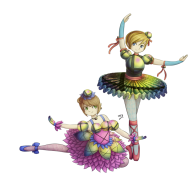 Smack Studio Kickstarter page
I stumbled upon this little game creation studio that makes platform fighters. I felt immediately hooked onto the idea of the platform fighter creator that's easy to make without requiring code.

I backed this project since there is great potential for this to become the next MUGEN of platform fighters, especially since fans are already recreating characters from the Smash Bros roster and other content as well.

The software is currently available on Steam to make your own fighter and stages. There is an active discord community up there for those into making stuff with Smack Studio.

Finally, there is a kickstarter campaign that will finish on February 28th with various perks ranging from discounted copy and T-shirt to having your original character being into the base sample roster plus for more game developer studio-pleasing perks like retaining rights of their character plus some marketing support for the games made by high tier backers involving those characters. Even when their kickstarter campaign is finished, the developers of smack studio are responsive to community feedback.