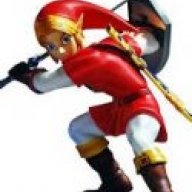 Okay so apparently this is 3 years late haha. I do think it's still worth noting that Falco gets the most mileage out of this since his airtime is kept to a minimum and his landing lag from doing this is also almost nonexistent.

If you shorthop as Falco, Charizard or Captain Falcon, then immediately airdodge and then buffer any attack just before you land, you'll land with much less lag than the normal airdodge landing. Specifically, for some reason, you'll land as if you fastfalled. Captain Falcon and Charizard's fastfalled animations still give them a little landing lag; however, Falco's fastfalled land seems absolutely lagless! You can land as Falco after a shorthop, immediate airdodge and then any A attack just before landing and then immediately do anything afterwards as if you didn't airdodge at all.

It's not great as an approach option since you're vulnerable for some frames before landing, but SHALCing(?) seems incredible as a counter to approaches. This lets Falco pick where he wants to land while he's invulnerable and then immediately act when he lands. Dash attack, block, running grab, any smash attack, roll, SHALC again - everything's on the table afterwards for these three characters, and immediately available to specifically Falco.

I don't know how effective this tech is in IRL matches since I only recently discovered it, but feel free to try it out yourself if you haven't already and share your thoughts. Trashy tech or the real deal?
Last edited: Apr 30, 2017
You must log in or register to reply here.
Share:
Facebook Twitter Reddit WhatsApp Email Link
Top Bottom