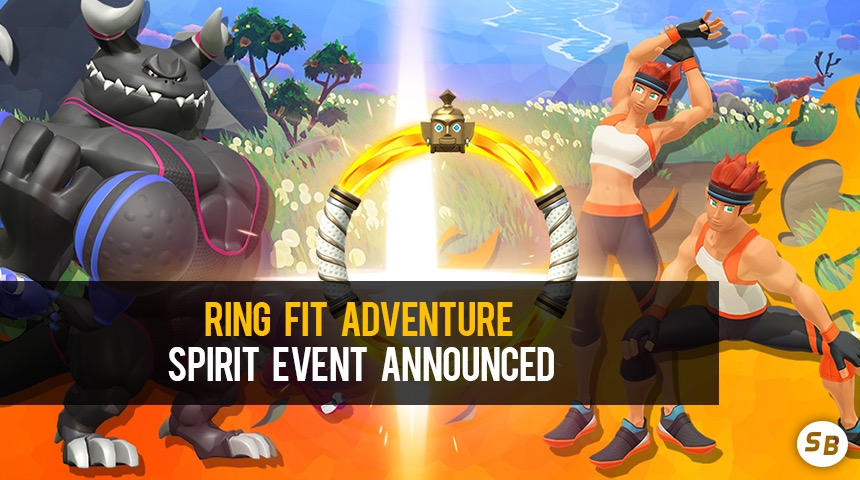 A new Spirit Event has been announced with focuses on the recent Nintendo Switch game, Ring Fit Adventure. This is a more unique take on the typical fitness games Nintendo is known for such as the Wii Fit series and taking a more fantastical approach. This game was released on October 18th, 2019 which makes it a more recent entry but certainly not the most recent.

For 5 days from March 13 (Fri), The Spirit Event "Fight using your body! Ring Fit Adventure" will be held! Three new spirits will appear so be sure to check them out!

The new "Ring Fit Trainee" is the main character of "Ring Fit Adventure".
Click to expand...

These three new Spirits are the male and female Ring Fit Trainees (as a pair), the Ring-Con, and the villain of the game, Dragaux. This evil villain was once sealed within the Ring but managed to convince the Ring Fit Trainee to release him. He is obsessed with exercise, staying fit, and destruction.

With this Spirit Event being announced, it seems fairly unlikely that the Ring Fit Trainee will be joining Fighter’s Pass Vol. 2 as a DLC fighter. However, it’s great to see new and upcoming series being represented in Smash! Make sure you head to the Spirit Board and grab these upcoming healthy and fit Spirits!

Author’s Note: I was kind of on Team RFT as a possible DLC candidate but still happy to see this game represented! What do you think? Are you happy to see this event announced or where you a supporter of the RFT being a playable character? Let us know below!

GAINZ Dragon confirmed for SmUsh.
Time to get in some reps.

By fighting The Ring Fit Adventure Spirits!
In the words of Chrom:
"I suppose I'll get my chance... another day." - Chrom, 2014
Unironically I really would've loved to seen the Ring Fit Adventurer in Smash as a playable fighter. It may sound like a joke yet there's still enough room for a unique moveset for them to stand apart from Wii Fit Trainer.
Welp, they'll get their chance... one day...
oof thatll be a bit of a blow to some fans
This game seems to be surprisinglydeeper then it appears...
from what I've seen so far it looks like Drageux was originally an obese dragon who had insecurity issues but was trained and befriended by Ring, however his obsession with getting a perfect body consumed and got him controlled by a dark energy. So you aren't trying to stop him, but save him.
Or maybe I'm just overthinking this RPG that has you beating up dumbbells by doing squats I dunno.
Last edited: Mar 11, 2020
You must log in or register to reply here.
Share:
Facebook Twitter Reddit WhatsApp Email Link
Top Bottom