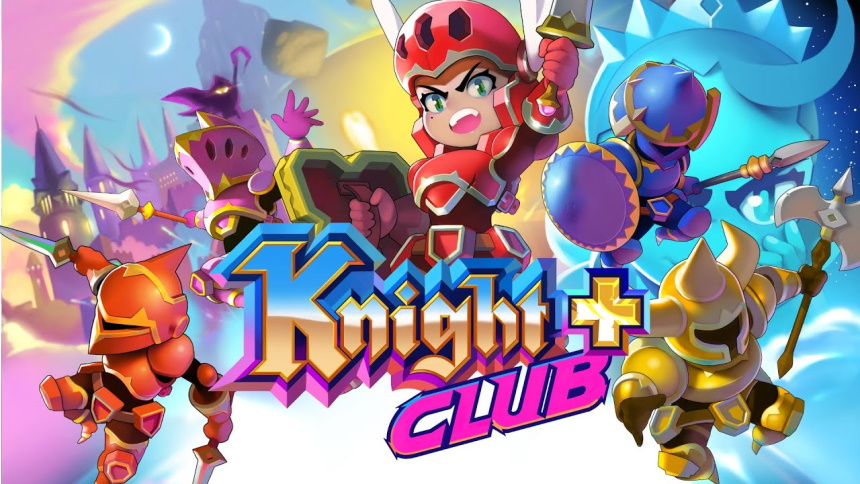 Gutter Arcade's platform fighter Knight Club has been re-released on Steam as Knight Club +, featuring updated visuals, improved online and some additional characters. The original version first launched as a Humble store exclusive in 2018, though it was later removed and re-released on itch.io as a free download, and this update looks like it could give the game a new lease on life.


Unlike other recent forays into this under-explored fighting game subgenre, Knight Club doesn't actually take that many cues from Smash. It has directional attacks, supports free-for-all matches and team battles with up to four players and has players fighting in a variety of arenas with different platform layouts, but the similarities largely stop there, as Knight Club borrows more from a mix of Mega Man X and Marvel vs. Capcom. While certainly not the first attempt at a platform fighter that eschews the Smash formula, it's clear right from the start that despite director Nathan "RatCasket" Ranney's professed disinterest in Smash, he gets a big part of the appeal of competitive Smash on a mechanical level: movement.

Knight Club's movement is vastly simpler than that of Smash; with only three movement options—walk, jump and dash—that all function about as basic as these mechanics get in a platformer of any kind. At the same time, this simplicity lends the movement the same freeform feeling you get out of advanced movement in most Smash titles. Walk speeds are comparable to some dash speeds in Smash, but you can still turn and stop on a dime. Dashing gives you a quick burst of forward momentum - either on the ground or in the air. The ability to cancel a dash by performing any other action gives it a comparable utility to Melee's wavedash, though amusingly enough, this game features a different type of wavedash - the one seen in the Marvel vs. Capcom series, performed by rapidly dashing, canceling into a crouch, then dashing again.

It's a radically different philosophy behind movement than what Smash follows, and one that I actually hope to see more platform fighters adopt. Rather than using advanced movement tools to skirt the limitations of your basic ones, your basic tools come with very few limitations to begin with, letting you freely chain them into each other and your other tools. We've seen elements of this in Slap City and Rivals of Aether, but I think there's plenty more design space to explore with this approach.

Knight Club also uses a traditional health bar, rather than Smash's percents and knockback system. Each attack does different amounts of damage, and you regain health every 1.2 seconds while crouching. Attacks still launch opponents, but knockback doesn't scale off the amount of damage the opponent has taken. Instead, the game features a combo scaling system inspired by the ones seen in many traditional fighters; as your combo continues, the damage and hitstun each hit inflicts decreases while the knockback increases. Directional influence is also absent, but once you're out of hitstun, you automatically perform a midair tech roll in whichever direction you're holding, much like the one featured in many of Arc System Works' fighting games, and you can also delay this tech roll by holding the jump buttons. Because of the focus on traditional health rather than ring-outs, stages are boxed in, opening up opportunities for corner combos.

Character and moveset design is also radically different from Smash, but also from many traditional fighters as well. The most obvious difference is that your moveset isn't tied to your character. Instead, character choice was purely cosmetic in the original version of Knight Club, though Knight Club + gives each character their own passive bonus. These include general boosts to basic stats like health, damage dealt and damage taken per hit, more specialized bonuses like a double jump, increased chip damage or increased stats in certain situations, and replacements for the healing mechanic.

Rather than characters, movesets are tied to your choice of weapon, with four options: sword, dagger, spear and axe. Each has 3 moves - a sideways attack, an upward attack and a downward attack, and a different playstyle. The sword offers a mid-range, all-around moveset, the dagger is quick with strong combo potential but poor range, the spear has the longest reach but has narrow hitboxes, and the axe hits hard and has big hitboxes but has the slowest frame data. The lack of any sort of special moves, and the fact that there aren't separate grounded and airborne moves does put an obvious limit on gameplay variety, and is probably the biggest overall gripe I have with the actual gameplay.

The game also has several game modes that are available both locally and offline:
That said, there’s nothing in the way of single-player content, and I mean literally nothing—not even CPU battles or a training mode—so if you don’t have friends you can play with, you’ll be at the mercy of Steam matchmaking.

While prior versions of Knight Club required direct connection via IP address (often requiring players to either port forward or use external software like Hamachi), Knight Club + uses Steam’s matchmaking servers, making it about as easy to find lobbies and play with friends as it is in any other fighting game on PC. Unfortunately, the game doesn’t have rollback netcode, but does have one of the better delay-based solutions out there, having been developed by YellowAfterLife, who also made the netcode for Nuclear Throne, Rivals of Aether: Definitive Edition and both Nidhogg games.

The game also supports most PC gamepad and arcade stick options, including the GameCube controller via USB adapters, including Nintendo's own official adapter and the ones produced by third-party peripheral manufacturers like Mayflash and Hit Box Arcade. That said, using the former requires third-party drivers, and the compatibility is largely untested. The differences in control schemes can also make adapting your preferred control scheme for Smash kinda awkward, so you might want to fiddle around a bit until you find something you're comfortable with, or even try using a different controller entirely if you have one.

Despite the delay-based netcode, lack of single-player content and limited moveset design, there are so many interesting ideas on display in Knight Club +, and it's so rare—or even unheard of, depending on who you ask—to see a platform fighter eschew the Smash formula entirely and make it work that I think this game is definitely worth a shot, at least if you have a few friends who are also interested. If you wanna try the game out, I’d recommend at least downloading the demo version, which features all game modes, but only has five characters and only supports online play with other players who have the demo. If you like what you see and have some friends who're interested, the full version is only $5, and it's on sale for 20% off until October 16th.

If the core gameplay intrigues you, but you find the game modes and character options lacking, Gutter Arcade is currently working on Duel Arms, a sequel to Knight Club that aims to address both of those issues, with EX moves, sidearms and more primary weapons to add more depth and variety to movesets, as well as actual single-player options, so keep an eye on their twitter for future updates.