I don't have the game, so I can't test this myself; I've seen lots of gameplay of K. Rool, and whenever he uses Neutral Special on the ground to vacuum an opponent, they always aim and shoot upwards. So i was wondering, why not forwards or even downwards? Could this lead to a tech chase, or is it nonviable for some reason?
S

The game only lets you do diagonally/directly up after the suck. 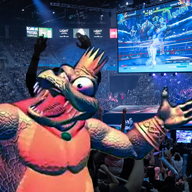 Here is what I think of each direction from the vacuum, from my experience:

Forwards
In my opinion, shooting forwards is the best option. It has the highest knockback of the three, and can kill starting around 110% near the ledge. It also deals the most damage of the three directions. If you need to get your opponent far away from you, or want to try stage spiking opponents with it near the ledge, or just simply close out a stock at high percents, then forward is definitely the most optimal option.

Upwards
Upwards can be good at early or mid percents. If you know what you're opponent's jumping habits are, you can try to cheese them by going for a helicopter kill immediately after the upwards blunderbuss shot. Up throw to helicopter works as well, but upwards blunderbuss vacuum is the most reliable way in my opinion to connect with the propeller. Shooting upwards is bad at high percents, as King K. Rool has very few ways to chase opponents high up, and shooting upwards won't kill at high percents either. I mostly recommend shooting upwards for earlier percents, in order to use it for followups like up air.

Backwards
Backwards is definitely situational, but it does have good uses. It's knockback is significantly weaker than shooting forwards, but it can be good for starting edgeguards. If you are near the ledge but facing away from it, you can try shooting backwards so that the opponent is off-stage. Shooting backwards may also be good while both players are on-stage, as it won't send the opponent as far as a forwards shot would, meaning you can gain some stage control while the opponent isn't too far away to be further punished. Shooting backwards does have its uses, mostly for positioning or even getting kills near the blastline, but the knockback on shooting forwards is significantly better.

To answer OP's last two questions, the blunderbuss vacuum does not lead to tech chases. While it does put the characters into tumble animation as they get shot out, it's unlikely for a tech chase to ever happen because they get shot out at a higher angle, plus they can use an attack out of the tumble animation to get rid of it. I wouldn't say that the vacuum is unviable, but King K. Rool's hurtbox out-ranges the vacuum, so it becomes hard to use against sword characters like Lucina and Cloud. The vacuum can be a good mixup tool though, the King K. Rool player just has to make sure that a projectile or ranged attack won't hit through it. A lot of players who are inexperienced in the matchup may also get caught off-guard when King K. Rool slips through platforms while using the move, so that could be another reason to try to go for the vacuum. I hope this response answers some of your questions!
S

Can't forget that they have iframes for almost the entire tumble animation, makes it pretty impossible to punish even if you could catch up.
W

What do you guys think of using a falling neutral b when offstage? Have seen this move called “suck and cuck”

I sometimes do this when I am offstage but above the platform & the opponent is charging at me to gimp... I then suck them up and shoot backwards for a kill (or forwards it I’ve fallen low enough and don’t think they will tech against the platform)

whitesnake said:
What do you guys think of using a falling neutral b when offstage? Have seen this move called “suck and cuck”

I sometimes do this when I am offstage but above the platform & the opponent is charging at me to gimp... I then suck them up and shoot backwards for a kill (or forwards it I’ve fallen low enough and don’t think they will tech against the platform)

Yeah that's pretty much it in a nutshell. Just be careful with it as the delay on using another special move can get you killed sometimes.

I find myself using it via drop through on platforms and firing off stage for setups more than anything else, most people don't fall for the suck n cuck anymore.
You must log in or register to reply here.
Share:
Facebook Twitter Reddit WhatsApp Email Link
Top Bottom