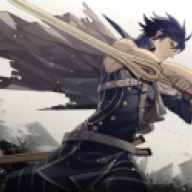 I didn't see a thread on this, so here it is.

The first number listed is the first active hit box.
I didn’t determine the total active frames because that’s more complicated and the animations in the game are deceptive.

Dair - 14, Completes 58, FAF 59; Landing Lag 18
(Note: This move takes a long time to end in the air because Mii Swordfighter lets his sword go part way through and has to spend time catching it again before the FAF.)

1 - Gale Strike - Tornado appears with a hit box on 20, the tornado lasts until frame 76. Completes 67, FAF 68
(Note: Mii Swordfighter spins around twice before the tornado comes out. The tornado is roughly 6 units away at this time. Don’t use tornado unless your zoning at mid-long range or edge-guarding.)

1 - Stone Scabbard -
Grounded - Full body and head invincible 5-12, 13-17?, (No hit box despite animation 18-41, down strike 42 (Not sure how long the ground hit box is), Completes 95 (Including landing lag), FAF 96, Landing Lag 44 (Note: Once again, Miss Swordfighter releases his sword and then catches it which increases the end lag.)
Aerial - Looks to be the same as grounded, completion varies based on how far you travel downward.

2 - Reversal Slash - 16, Completes 36, FAF 37. On hit, fully invincible frame 17-26 (Note: The rainbow animation starts up on frame 8, but does no damage until frame 16. I am unsure of how long the reflection window lasts. Second note: Invincibility on hit covers Mii Swordfighter’s entire body and head except the tips of his feet. Unsure of where the hurt box actually is.)

Roll Dodge Back - 34 to complete, invincible 5-16 (Fresh)
(Note: He stops being invincible when he goes for the handstand flip.)

Note: The dodges, dashes, and grabs for all three Mii fighters have the exact same frame data with the exception of Mii Swordfighter's neutral air dodge having 1 extra frame of invincibility (3-30, not 3-29).